Upgrades to UK airbase marked by US fighter jets 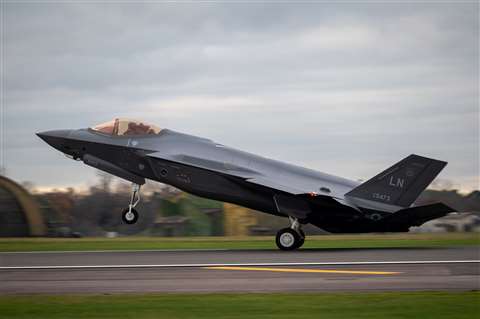 A US Air Force F-35A Lightning II lands on the flightline at RAF Lakenheath in Suffolk. (US Air Force photo by Senior Airman Koby I. Saunders)

A key milestone in the ongoing upgrade works to RAF Lakenheath in Suffolk has been reached with the arrival of four new F-35A fighter jets for the US Air Force.

The arrival of the military aircraft - the fifth generation of the F-35 model and the first of their kind in Europe - marks the significant progress of infrastructure improvements to the base, which is being upgraded to accommodate an increased UK and US military presence.

The project is being carried out by Kier and VolkerFitzpatrick, via a joint venture company called KVF35.

Works to the airbase include the resurfacing of aircraft aprons (parking and maintenance areas) and the construction of new maintenance hangars, training facilities and storage areas.

Deon Scholtz, Operations Director for VolkerFitzpatrick, said, “It is fantastic to see the project reach this key milestone, with the arrival of the first F-35 aircraft.

“Improvements to the base’s infrastructure are progressing well and the team is also undertaking regular social value initiatives, within the local community. I am delighted that VolkerFitzpatrick is able to support this significant moment at RAF Lakenheath.”

The joint venture was awared the contract for the base’s upgrades by the Defence Infrastructure Organisation (DIO) - the operating arm of the Ministry of Defence - in November 2018.

James Hindes, Managing Director for Strategic Projects & Growth at Kier Construction London, South & Strategic Projects, said, “We are extremely proud of our ongoing relationship with DIO and we’re delighted to have been trusted to deliver the crucial infrastructure to create the first international base for the cutting-edge F-35 aircraft.” 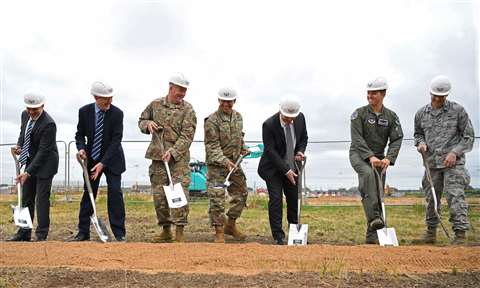 The works at the base began in July 2019 and have so far required “a large and specialist workforce” onsite, with an average of “between 500 and 600 people working on the project every day,” said Kier.

Steve Rix, DIO’s Programme Director Steve Rix, said, “This is a very large and complex programme, which has continued construction through Covid-19 while ensuring workers stayed safe, so it’s great to see this very visible sign of progress.

“Today we are seeing the first glimpse of the future of RAF Lakenheath when this project is complete and all of the F-35s are here.”

The F-35A Lightning II jets are assigned to the 495th Fighter Squadron of the US Air Force.

Known as the Valkyries, the squadron will operate alongside the UK’s existing F-15 aircraft and its yet-to-arrive F-35s as part of a military cooperation.

“RAF Lakenheath will be the first permanent international site for US Air Force F-35s in Europe and continues the base’s long and proud history of supporting US Air Force capability in the UK,” said RAF Lakenheath earlier this year.

“Co-locating US and UK F-35 capability in the UK will help strengthen the historic military ties between the two nations, as well as the partnership between the RAF and US Air Force.”

The first in a wider programme of work to support US Air Force operations in the UK, more than US$1bn expected to be invested in the UK over the next seven to ten years, according to Kier. 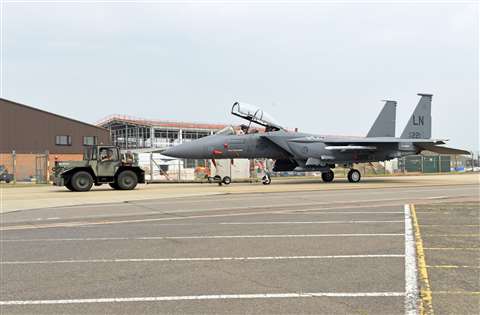