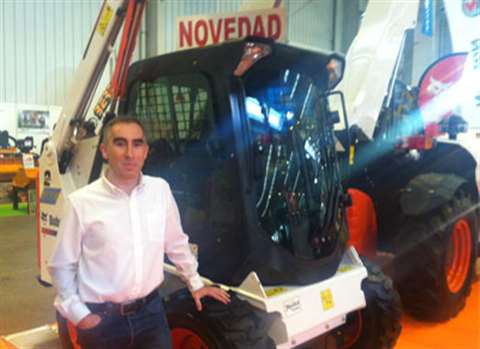 Bobcat district manager for Spain Carlos Campos is confident that the worst is over for construction equipment sales in Spain and Portugal, and forecast improvements in 2014.

Speaking during the SMOPYC exhibition in Zaragoza, Spain, Campos said, “Last year we hit the bottom in Spain and Portugal, but we started seeing improvements in the last quarter. This has continued in the first quarter of 2014. Last year, we sold 100 machines – that is very low when you consider that in 2007 we sold around 1,800 machines.”

Campos forecast that the construction equipment market in Spain would grow by up to 15% this year as contractors and rental companies replenished their fleets. He said Bobcat expected to sell up to 130 machines in Spain and Portugal in 2014.

“The market is growing, we are seeing new deals that are also taking less and less time to complete. The end users have better access to finance and need to replace their old machines. Rental companies are also starting to get more active in purchasing new machines. More or less 10% of our sales go to rental and the rest goes to dealers."

Campos said his forecast was based on expectations for the wider economies in Spain and Portugal.

“Stronger GDP growth is forecast for Spain this year, and unemployment is also falling. Many public works projects were stopped during the crisis – including highway and rail projects. These are still pending, and work is now starting up again.”

He said Bobcat would continue to introduce new machines to the market. At SMOPYC, the manufacturer was showcasing the S450 skid steer loader – a 2.2 tonne machine that has been launched into the Spanish market at the show.

SMOPYC runs from 1 to 5 April at the Zaragoza Exhibition Centre. The show is organised by ANMOPYC, the Spanish Manufacturer’s Association Construction, Public Works & Mining Machinery.