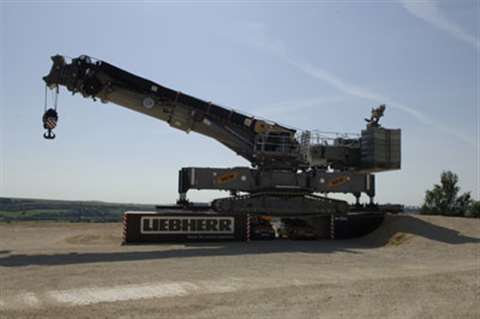 Liebherr has previewed two innovative new cranes which it plans to launch at next April's Bauma exhibition in Munich, Germany.

First is the LTR 11200 telescopic boom crawler crane, which has been designed with the construction of wind farms in mind. From the slew ring up, the crane is derived from Liebherr's 1200 tonne capacity, nine-axle LTM 11200-9.1 all terrain crane. This gives the LTR 11200 the lifting capacity and 100 m boom necessary to place heavy turbines on top of tall pylons.

The undercarriage meanwhile is a narrow gauge crawler chassis, which, at only 4.8 m wide, allows the new crane to negotiate the tight spaces between wind farm pylons. It is available with an optional hydraulic steering aid, which applies pressure at the middle of the crawler track, reducing pressure on the inside track and making it easier to turn.

With standard outriggers, the LTR 11200 has a 13 m x 13 m footprint for lifting duties. Lifting heights of up to 189 m are possible with various extensions and jib attachments, and the crane also features Liebherr's Y-guying system to increase load capacity.

Also new from Liebherr at next year's Bauma, with be the three-axle 45 tonne capacity LTC 1045-3.1. This unusual machine will feature a single cab on a telescopic arm. In the forward position, the cab will be well placed for on-road driving, but it can also be pulled back to give the operator a clear view of the boom when it's time to lift.

Liebherr says this will give the machine all the advantages of a two-cab crane, but in a more compact package. This will allow it to carry out tasks associated with Liebherr's LTC compact crane as well as its more traditional LTM all terrain cranes.

As Liebherr took the wraps off its new cranes, it also took the opportunity to announce its financial results for 2008. Its crane divisions fared better than others last year, but they did not escape a downturn at the end of the year.

"After a previous period of reduced business activity, turnover in the Far East and Australia region rose again in 2008, and recorded the steepest relative increase of +30.2%. At € 956 million ($ 1.3 billion), total sales revenues were € 222 million ($307 million) higher than the previous year's figure, with especially strong growth in Australia, Indonesia, India, South Korea and Singapore. Turnover rose in China too, one of our largest Asiatic markets," said Winfred Boehm, a director of Liebherr-International AG.

Liebherr said its order intake for the first three months of the year was worth -40% less than the same period last year. Tower cranes have been more affected than the mobile crane area, which will only drop slightly in volume this year, according to Mr Boehm. He added, "The current situation does not permit any such drop to be quantified. In view of their limited room to manoeuvre in the finance area and uncertain future prospects, many customers are still postponing investments or cancelling orders they had already issued."