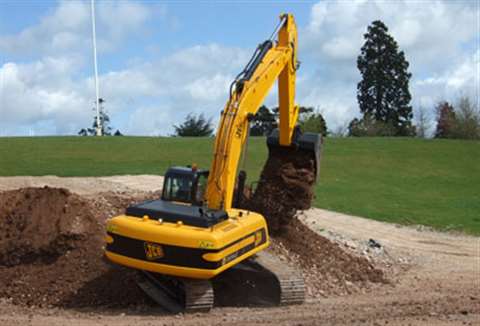 "Tailored for the muck shifting industry," is how John Gill, managing director of JCB Heavy Products describes the new JS 360. Filling a gap in the range between the 33 tonne JS 330 and 46 tonne JS 460, the new 36 tonne machine offers efficient operation as well as a range of options for different applications.

Power for the new machine comes form the same six-litre Stage IIIA Isuzu engine found in JCB's 29 and 33 tonne excavators. Rated at 212 kW for the JS 360, JCB says the diesel offers -6% less fuel consumption than competitor machines - equal to as much as 3500 litres per year.

As well as low fuel consumption, JCB says the JS 360 offers the best breakout forces in this class of machine when equipped with a mass excavation boom. A long reach front end is also available, as is a two-piece boom as well as a high-reach demolition option.

The JS 360 can take up to a 2,5 m3 bucket, depending on the density of the material being moved. It also features the same front pin spread as the next two machines down in the range, allowing contractors and rental companies to interchange attachments.

Track options include LC and NLC undercarriages, and track shoes from 600 mm to 900 mm are available. In the cab, climate control is a standard feature, and operators will also appreciate a large storage area behind the cab in the upper structure itself, as well as the storage space behind the seat.

Next to the outer storage area is the access panel for the radiators, which have been mounted side-by-side for ease of cleaning. These are easy to reach from ground level, as are all of the daily checkpoints on the JS 360.

The JS 360 is one of the first new models to come out of JCB Heavy Product's new UK£ 40 million (€ 44 million) factory on the outskirts of Uttoxeter, UK. Having moved out of the old factory in the town centre last year, full production is now underway at the new 42000 m2 facility.

As well as giving JCB the capacity to manufacture 8000 tracked and wheeled excavators per year, compared to 4500 at the old facility, the new location also makes logistics easier. Instead of having trucks weave in and out of the town centre, the new factory is next to the A50 trunk road, providing fast access to the UK's road network.

JCB CEO Mathew Taylor described the facility as, "One of the world's most modern and best excavator factories."

He continued, "This underline how serious we are about the excavator market. We have never been afraid to invest in a downturn and I think this is going to stand us in good stead when the upturn comes."

The machine tools in the factory are a combination of new machines and equipment brought up and recommissioned from the old factory. One of the new additions is a six-stage paint shop, and another crucial area is the ‘clean room' for assembly of hydraulic components.

JCB says initiatives such as these will make major contributors to the overall quality of its excavators. As a result it has doubled the standard warranty to two years or 3000 hours.