Is net zero in construction possible?

Construction without carbon emissions may be no more than a pipe dream, but modern methods and materials are moving us in the right direction. Mike Hayes reports

Is it possible to deliver a construction project without carbon emissions? The answer is no and, in all likelihood, it never will be.

What does this mean for construction, given Europe’s ambitious emissions targets?

In 2021, for example, the EU made history by establishing a new climate law, with net zero emissions by 2050 as a binding target.

It has been clear for at least seven years – since COP21 and the Paris Agreement – that drastic change is needed, and nowhere more than in the construction industry.

Victoria Burrows, director of the Advancing Net Zero programme with the World Green Building Council, says, “As a sector, we will be responsible for emissions; we cannot eliminate them completely – unless we stop building”.

What we can do is reduce emissions significantly, from the embodied carbon produced during the construction process.

To achieve this, Burrows believes “there is nothing less that we need than a complete transformation in the way that we build, design and operate buildings.”

Why reducing embodied carbon is key

She says, “The first principle of addressing emissions from embodied carbon is to prevent them in the first place…from the materials, the extraction processes of materials, the transport, the construction phase itself – everything up to the completion of the building.

Burrows adds, “We can prevent a lot of emissions by maximising the reuse of existing buildings through renovation.

“But when we do choose to build a new building, making sure that we’re reducing embodied carbon and those impacts, by optimising design techniques, such as offsite modular construction…

“But also thinking about construction sites [including] processes, electrification or reducing fossil fuel use on site. Also optimising materials selection for the building itself, through low-carbon material choices.”

Until recently those low-carbon materials were not easy to come by at a scale that could make a significant difference to the industry.

Add to that the high cost of using these newly-developed materials and newly-developed manufacturing processes, and it was difficult to see how they could really have an impact on overall construction emissions.

It would appear, however, that change is coming – and coming in the form of new low-carbon-cement technologies.

Given that cement is the world’s largest manufactured product by mass and is responsible for more than 7% of global carbon emissions, this could be very good news. 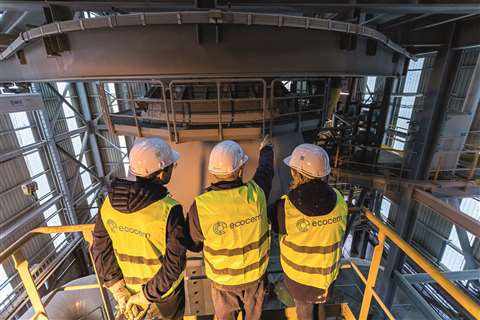 Donal O’Riain (centre) views a plant with members of his team. (Photo: Ecocem)

Ecocem says its new technology, known as ACT, results in the manufacture of a cost competitive and globally scalable solution, that can be produced within existing cement plants “without significant additional investment or modifications”.

The launch of ACT coincides with a new report, commissioned by Ecocem, which indicates that without industry cooperation and the deployment of new scalable solutions at speed, reaching the goal of a 50% cut in emissions by 2030 is impossible.

Meanwhile, Ecocem’s current solutions are being used on a pilot site of France’s Grand Paris Express - one of Europe’s largest transport projects, where 50,000 tonnes of its ultra-low-carbon cement GGBS has been delivered for the construction of a tunnel.

The new material is expected to save some 34.5 tonnes of carbon emissions. 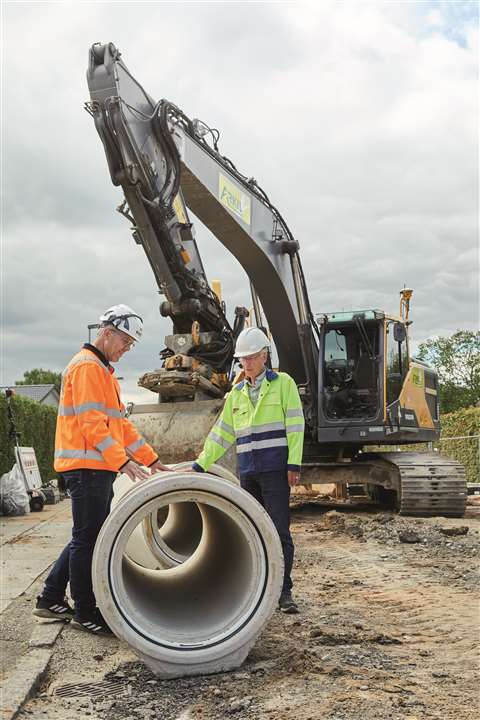 “After that, we do industrial-scale piloting and proof of concept…to show the solution actually works at their facility, with no changes required to the production process.

Rauramo adds, “When we talk about the recipe of the customer, we use their existing mix design as a starting point for our R&D work, then look at local available industrial side-streams or bi-products that we can use, then create the recipe with our chemicals to activate and get the necessary quality to the end product.”

Ultimately, Geoprime promises up to an 80% reduction in the carbon footprint, compared with standard cement.

It seems the technologies now being developed to ensure the scalability of low-carbon cement and cement alternatives, along with minimal disruption to current processes, have the potential to change the emissions outlook for construction.

The European Union has set out its Climate and Energy Framework for 2030, targeting a 40% reduction in greenhouse gas emissions.

With this in mind, construction industry players are readying themselves for more stringent emissions regulations. But many can see the potential benefits – both to the planet and to business – of moving ahead of regulation, towards more sustainable construction methods. 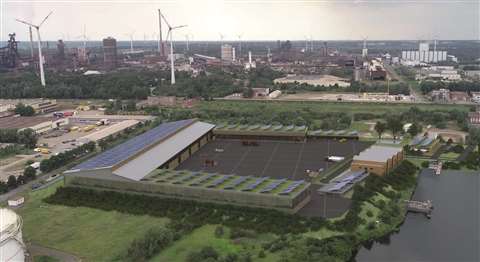 The company says it is putting circular construction at the heart of its sustainability strategy and the new facility will be used as a testbed for preserving resources and avoiding carbon emissions.

The centre is to be built using sustainable methods of construction and with primarily climate-friendly building materials, such as wood and recycled concrete.

Strabag says the centre will be operated in an energy self-sufficient and climate neutral capacity, with power generated by photovoltaics and heat coming from a heat pump in combination with ground-level geothermal energy.

As construction firms begin to see the benefits of using ‘green’ methods, including offsite construction and digital technology, so we begin to see an acceleration of best practice and a subsequent reduction in emissions.

Industry bodies are recognising that exemplar projects and businesses will begin to reap the rewards of their higher ‘green’ profiles.

Chris Newman, zero carbon design manager at Mitsubishi Electric believes reaching net-zero carbon emissions is absolutely feasible, and is seeing progress being made in the construction industry across Europe.

He says, “Assessment methods such as BREEAM provide sustainability standards for the pan-European built environment.

“As well as this pan-regional guidance, every country is also addressing its own priorities – which vary across the continent depending on factors unique to that region.

“For example, Spain has legislated that no public spaces can be cooled below 27°C in order to limit carbon emissions and energy consumption; France has included the impact of embodied carbon in its PEP ecopassports; and Scandinavia is running almost entire cities on district heating networks.”

At some point, however, we reach the limit of our current capacity to reduce emissions. When we reach this point, all we can do is offset the carbon we continue to emit.

Carbon offsetting has been disparaged by critics who say it is merely an opportunity to continue with ‘business as usual’ while appearing to achieve sustainability goals.

Victoria Burrows sees things differently. She says, “We see offsets as an important and significant part of the transition [to net zero].

“We believe that, if applied in the right way, offsets can have a positive impact on the sector.

“So, after you’ve achieved the maximum possible reductions, you should compensate for residual emissions.”

An area of Stockholm city centre in Sweden will use electric equipment from Volvo Construction Equipment (Volvo CE) as it becomes a testbed for emission-free construction equipment as work begins on its urban transformation.

The project contracts stipulate for fossil-free operations wherever possible, including transport to and from the construction site.

There was also a requirement that at least one of the larger excavators working on site should be electric – Volvo CE supplied the new 23-tonne EC230 Electric excavator, together with a mobile peak-shaving power unit.

The EC230 Electric Excavator on site in Sweden. (Photo: Volvo)

As Sweden’s largest fossil free worksite, it is set to save approximately 2,012 tons of CO2 emissions, the equivalent of 35 trucks driving about eight hours a day over one year. Volvo CE is working on the project with the City of Stockholm, construction company Skanska, Volvo CE dealer Swecon and other partners.

Construction is set to finish in 2033 when it will provide 3,000 new homes and 14,000 workplaces. In addition to the electric excavator, all other machines will be run on HVO.

According to NREP, the building will achieve 100% carbon neutrality over the course of its lifecycle and across both operational and embodied carbon, without the need for carbon offsetting.

The firm says it will do this through means including the use of cross-laminated timber for the structure and facades, as well as organic insulation that binds more CO2 than it emits during the production process. Green cement, promising a 30% reduction from standard cement, will be used in the foundations of the facility. 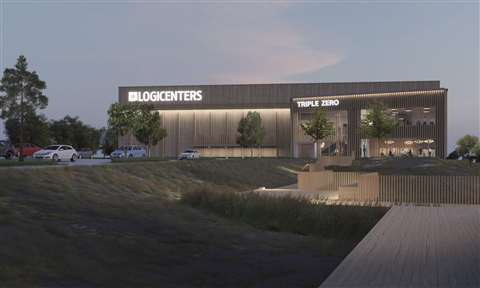 An impression of the proposed NREP logistics facility in Bålsta, Sweden. (Photo: NREP)

Ultimately, the facility’s lifecycle carbon emissions will be reduced to net zero via a disassembly design principle, incorporating the reuse of its biogenic materials, including the timber structure.

From an operational perspective, the building will use 100% renewable green electricity, and NREP says it even has the potential to become “energy positive”, using solar, heat pump and battery storage solutions, that could send surplus energy back to the grid.

Claus Mathisen, CEO of NREP, said, “We have collaborated with the industry’s leading innovators to push new boundaries and deliver the world’s greenest logistics development.

“Drawing from the most advanced products available, this project will be a test bed for emerging solutions, creating a...commercially viable paradigm in carbon neutral real estate.”

*This article was first published under the title ‘Built to last’ in the November-December 2022 issue of Construction Europe magazine.