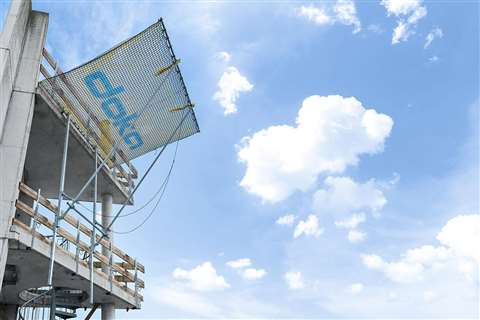 Doka is to launch a new net system for construction projects, that it says “redefines” site safety standards.

Designed to catch materials, tools and debris that may fall from height, the Xsafe Catch Fan comprises an ‘easy-lock’ system that enables it to be quickly installed and repositioned in just few steps.

Its key features include a safety lever that secures the unit’s vertical extension tubes in place, without the need for fastening couplers.

Unlike similar products, the safety net’s vertical extension tubes are also square in shape, which means it can be assembled without the “strenuous hole alignment when securing with bolts”.

Doka, which will launch the product in September this year, said, “Once assembled on the ground, the Xsafe Catch Fan can easily be lifted as well as quickly re-positioned from floor to floor without adjustment to the vertical extensions.”

The Xsafe Catch Fan further incorporates a quick-folding mechanism that allows the net to be folded from the upper slab via a rope.

The new folding rope means that, instead of two people working simultaneously on two levels, the net can be folded by a single user - “saving manpower and crane time during re-positioning and cleaning.”

“Customers benefit from efficient and simple workflows, allowing them to focus fully on the essentials of day-to-day construction site operations.”