Utilities equipment specialist Ditch Witch has unveiled what it says is the world’s largest all terrain directional drill. 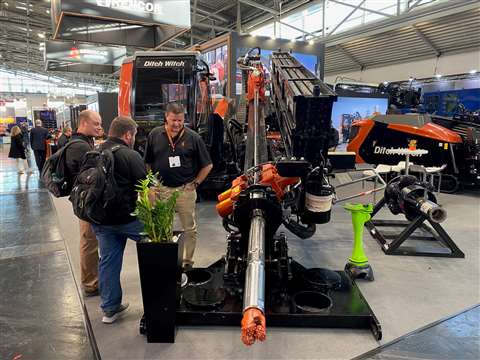 The AT120 boasts 533.8 kN of thrust and pullback and 21,015 Nm of rotational torque, equating to a 50% increase over its smaller predecessor.

Ditch Witch says the new machine, which is being rolled out to global markets, will give contractors the ability to drill long, large diameter bores in challenging terrain.

With a Stage V Cummins engine, the AT120 also benefits from a wealth of additional digital software and a newly-designed cab, with an angled air-suspension seat and enhanced visibility to all critical vision points.

Describing the new software on board the rig, Davis said a significant advance was seen in “…how we look at our displays…you can watch your monitors, see an illustrated picture of your drill print, of the carriage as it moves up and down. In your critical zones, where you’re making up and breaking up tool joints – you know right where it’s at at all times.”

The company also launched its RT125 Quad ride-on tractor with a Cummins Stage V engine, specifically for the European market.

The new-look machine features a number of new technologies, including crab and coordinated steering, trench depth information for operators, and a new anti-stall technology, that enables the machine to halt trenching and reverse the trenching chain to release debris, without stalling the engine.

Ditch Witch is also giving a debut to its new – and largest – micro trencher, the M26.

Developed with heavy duty power cables for urban areas in mind, the attachment can excavate trenches to depths of up to 660mm, among the widest and deepest on the market.