How politics and investment are driving Germany’s covid recovery

With an ageing transport infrastructure one of the many and varied challenges facing Germany as it emerges from the coronavirus crisis, CE takes a closer look at Europe’s largest construction market

The country’s Federal Statistical Office (Destatis) reports that 2.5 million people are directly employed in the industry, which has an annual turnover of more than €307 billion.

Bauma trade show 2022
The country is a construction giant, so it’s fitting that the German city of Munich should host the world’s largest construction trade show, Bauma, which is set to take place in October 2022.

First organised in the 1950s, this global event has, over the past 50 years or more, brought together the global construction industry like no other.

In 2019, the event saw more than 3,600 exhibitors arrive from 62 countries and regions, while some 628,000 visitors from 217 countries came through the turnstiles across Bauma’s seven-day programme.

Bauma – as with the industry as a whole – will doubtless suffer some fallout from the pandemic; it has already been pushed back from its usual March slot. Nevertheless, the great and the good of global construction will no doubt be in attendance when the event comes around and Bauma’s economic effect will still be felt across the German economy.

It’s not overstating the matter to suggest Bauma 2022 could be seen as a bellwether for the industry, not just in Germany, or even Europe, but globally; it’s that important.

German construction sector
Germany itself is expected to face significant economic challenges in the coming years, but the German government is placing considerable faith – and resources – into ensuring the construction sector remains strong.

It has announced an €86 billion investment plan in the national rail infrastructure, which itself is just part of a total fund of €269.6 billion set aside for transport infrastructure.

To say this funding is overdue could be seen as something of an understatement as for example, many bridges that were built more than 70 years ago are still in constant use across the country.

Given that Germany has become a key transit corridor within the EU, both east-west and north-south, the situation needs addressing urgently.

Knight Architects
Bartlomiej Halaczek, an associate with Knight Architects, a company with involvement in numerous German bridge projects, told CE, “Between 1990 and 2010, the German government primarily focused on reinstating the derelict infrastructure of former East Germany. This effort is now largely finished and a strong sense of urgency has since emerged in the western areas, where more than one-third of the bridges are in either poor or in critical condition.”

He says the German government and local communities are working hard on the problem, running competitions and tenders for replacements of the major bridges, like the Duisburg Neuenkamp Rhein Bridge, Rheinbridge Leverkusen, the Norderelbe crossing in Hamburg and the Knight Architects-designed Küstrin-Kietz River Oder crossing – a rail bridge set to be a link between Germany and Poland.

The Knight Architects-designed Küstrin-Kietz River Oder rail crossing, on the border of Germany and Poland

Halaczek said, “The future of German infrastructure planning will face the challenges of climate change. The pictures of the devastating flash floods in July reminded us of the high stakes, but fortunately the foundations to more sustainable approaches have been laid more than a decade previously.

“Over the last ten years, German authorities have often invited design solutions which focus on the reduction of carbon emissions and waste. The Kienlesberg Bridge in Ulm is the result of such orchestrated, city-wide programmes.”

A direct approach to reducing carbon is being followed by Knippers-Helbig as well as Miebach engineers, introducing mass-timber footbridges with a potentially negative carbon footprint. 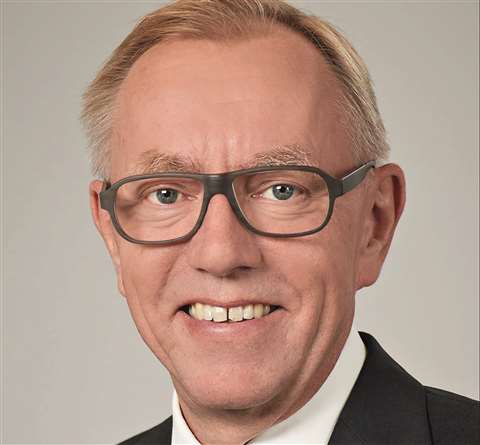 He said, “Overall, companies in the mechanical and plant engineering sector are continuing to report a very pleasing trend in incoming orders. The reluctance of customers during the Corona peak phase has clearly been overcome. Investments in equipment, machinery and services are at the top of the agenda worldwide.”

The VDMA reports that incoming orders for equipment saw growth of 29% during the first half of this year, compared with the same period in 2019.

Better news still comes from the review of the three-month period from April 2021 to June 2021, which shows orders increasing by 57%, although it should be added that domestic orders (which increased by 46%) lagged behind international orders (63%).

All, it would seem, is rosy in the construction garden. Why then are a number of confidence surveys (including CE’s own) decreasing optimism among construction professionals?

The answer is complex, but includes a significant issue within the supply chain. In Germany, among a number of building materials, problems with obtaining electronic components and steel have been highlighted.

Another issue that is gathering pace in Germany is a shortage of skilled workers. Dr Wiechers points out that the number of construction manufacturing employees on short-time working hours stood at approximately 52,000 in June, which is only marginally above the pre-Covid average for the time of year.

Sebastian Popp, economic expert at VDMA, agrees that supply chain problems and a lack of skilled workers are slowing down what is potentially a market in boom. He adds that “climate protection also requires great efforts in the building sector. Policymakers are called to put aside any bias when it comes to preferred technological solutions or the choice of building materials, and fair competition needs to be ensured.”

Importantly, the second quarter growth was well in advance of that seen in Q1.

New orders for the company rose 61% to €8.36 billion, while – with the help of stimulus packages from the German government, the company was able to publish its guidance for an operational net profit in 2021 of between €410 million and €460 million.

Hochtief’s chief executive, Marcelino Fernandez Verdes, said sales were continuing to growt and order books in all divisions had now risen to above pre-pandemic levels.

If Hochtief is a fair example, it would seem German construction is through the worst of times – and it will certainly continue to be at the forefront of Europe’s Covid recovery for some time to come. Nevertheless, as the country finds its ‘new normal’ it is also finding that much of its infrastructure requires focused attention. At the same time, it appears the government is not lacking in the political will or the funding to tackle the issue, and the organisational structures are in place to deal with the challenges ahead.