As the sector continues to embrace the eco-friendly agenda, companies supplying materials are continually refining their efforts. Ian Cameron reports on the adoption of sustainable solutions

The construction industry is increasingly under pressure to ensure that it uses the most environmentally friendly material, especially asphalt and concrete, in its projects. This has resulted in those companies involved in the provision of construction material forced to become increasingly technologically advanced.

There has been a sharp increase over recent years of the use of materials that have been reclaimed, as companies become more aware of their environmental obligations. Businesses have also realised that there are significant advantages linked to using recycled aggregates.

The University of British Columbia’s School of Engineering claimed in a 2020 report that recycled concrete can, in some cases, outperform conventional concrete. Researchers at the school conducted comparisons of recycled and conventional concrete within two common applications, a building foundation and a municipal sidewalk. Results revealed that recycled concrete had comparable strength and durability after five years.

The case for recycling becomes ever stronger as previous studies estimated that waste materials from construction and demolition contribute up to 40 per cent of the world’s waste. 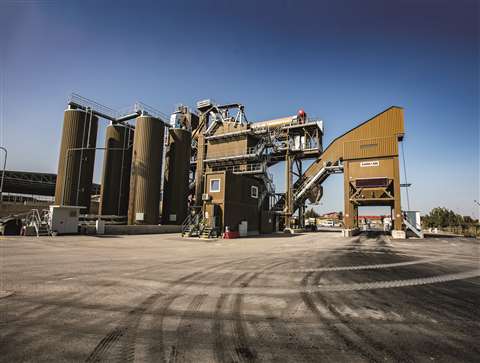 According to Ammann – which supplies the construction industry with mixing plants, machines and services – the production of asphalt mixes for the construction market is rapidly changing. This highlights that the trend is to use as much recycled material as possible, which reduces the environmental impact of asphalt production.

An Ammann ABP 240 HRT was recently purchased by Czech company Pražská obalovna Herink s.r.o. (POH). Approximately 90% of POH’s mix will be delivered to its two parent companies, with the remaining 10% used by individual customers.

Energy-efficient project near Prague
Roman Kadlec, plant director for POH, explained, “We acquired the HRT plant with the expectation that it’s more environmentally friendly, has greater reliability and is a more energy-efficient operation.

“Another deciding factor was the ability of the plant to produce asphalt mix with higher amounts of RAP [Recycled Asphalt Pavement] as well as mastic asphalt.”

The machine’s current production is mainly on the modernisation of a highway near the capital of Prague. The ABP HRT features a RAH100 drum that provides indirect heating of RAP, meaning the recycled material does not come into direct contact with the flame. The binder is not degraded and there are not high emissions.

Ammann technology enables the use of biofuels
Jan Thomschke, commercial manager and customised special orders manager with Ammann Group, told International Construction that there is constant pressure to reduce emissions.

He said, “Because a great deal of progress has been made, which of course is good news, it is challenging to find opportunities for further reductions. 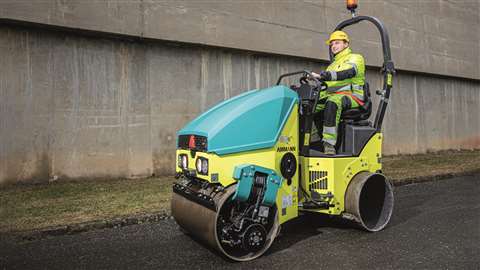 The Ammann Recycling Drum RAH100 enables recycling rates up to 100%

“There also are some ‘non-traditional’ types of emissions – noise, dust and odour – that are increasingly of concern as asphalt-mixing plants are located in commercial and sometimes even residential areas.

“Ammann supplies technology that enables the use of biofuels, these fuels support climate protection and reduce dependency on mineral oil. Examples of these fuels are rapeseed and sugar cane. Tall oil, which is a waste product of cellulose sulphate production, can also be used.”

He added that Ammann technology allows the use of these renewable energy sources or, in some cases, converting a waste product into fuel. This conserves natural resources and puts less pressure on landfills.

As part of the drive to reduce emissions the use of reduced-temperature asphalt as a road construction material is a well-established technology, yet increasingly popular with many companies making it available.

Tarmac – a UK-based sustainable construction materials, road contracting and building products business – offers ULTILOW, a range of warm mix asphalts for more sustainable road surfacing. ULTILOW warm mix asphalts are manufactured and supplied at lower temperatures than conventional hot mix asphalts. As a result, they offer significant reductions in carbon dioxide emissions of up to 15% and typically around 8%-10%. They also deliver a range of site safety and productivity benefits.

British business Breedon brings waterless LTA
UK-based construction materials group Breedon offers its Lower Temperature Asphalt (LTA), with no specialist equipment required as it is installed in the same way as hot mix asphalt. The process does not involve water, so almost all bituminous hot mix materials can be produced at lower temperatures – from road bases to thin surface course systems.

Building materials company CEMEX launched VIALOW a new range of low temperature, low carbon asphalts in early 2021. This uses a specially formulated bitumen additive to enable manufacture at up to 40°C lower than standard asphalt mixes. It is reported to produce up to a 20% reduction in embodied carbon emissions.

The lower temperature of the manufacturing process can also help to improve the long-term performance and durability of the asphalt, as a high temperature in conventional mixes leads to more oxidative hardening of bitumen than is seen in lower temperature variants.

CEMEX offer more environmentally friendly asphalts
Carl Platt, CEMEX’s Director of Asphalt, Paving, and Building Products for Europe, said it recognised that future construction needs to be balanced with the effect it is having on the environment.

He explained, “With the launch of VIALOW, CEMEX aims to make it simple for customers to choose more sustainable and environmentally friendly asphalts that have a lower embodied carbon, offset residual emissions and help drive vital change.”

“The new range is designed to produce faster construction times, minimise disruption and reduce road maintenance costs alongside the added benefit of a carbon footprint reduction.” 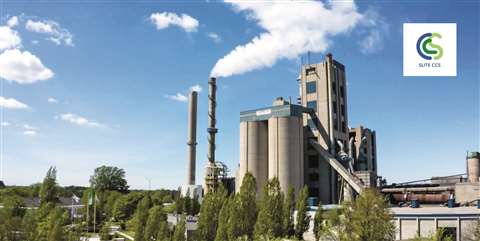 Continuing the environmental theme, HeidelbergCement has announced its intention to upgrade its plant on the Swedish island of Gotland to become the world’s first carbon-neutral cement plant. The installation at the Slite plant of HeidelbergCement’s subsidiary Cementa will be scaled to capture up to 1.8 million tonnes of carbon dioxide annually, which corresponds to the plant’s total emissions.

The use of biobased fuels in the cement production at Slite will be increased in line with the group’s commitment to significantly raise the share of biomass in the fuel mix. The full-scale capturing of the plant’s carbon dioxide emissions is targeted by 2030.

HeidelbergCement is building what is claimed to be the world’s first full-scale installation for carbon capture at the Brevik cement plant in Norway, capturing 400,000 tonnes annually or 50% of the plant’s emissions from 2024 onwards.

Fayat Mixing Plants opts for cleaner and green credentials
Luca Camprini, Fayat Mixing Plants’ vice president for sales and marketing, told International Construction that the company “respects the environment” with regards to the production of asphalt.

He said, “When it comes to road pavement, the reuse of existing materials, the ability to produce mixtures with reduced carbon dioxide emissions and energy savings (while ensuring quality outputs and low maintenance costs), are all essential issues for those who want to produce asphalt that respects the environment.

“In other words those asphalt producers who work for several customers at the same time and that require an easily changeable asphalt specification while maintaining a high level of quality output.” 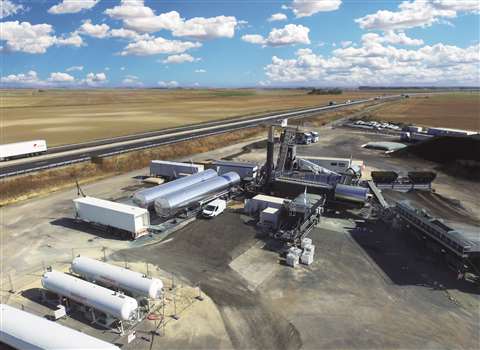 As an example of the company’s ‘green credentials’ Camprini cited the Marini-Ermont RF 400 Highway hypermobile asphalt plant. Its environmentally friendly features include the machine’s low height, which enables it to ‘hide’ behind small trees.

Its extreme mobility allows it to be as close as possible to sites, very low emissions partly thanks to the use of clean fuel (LPG) instead of heavy fuel and features, such as the elimination of fuel oil in favour of gas fuel that removes the risk of soil pollution.

A leading company in this field is asphalt mixing plant company Benninghoven, part of the Wirtgen group.

“Lower energy consumption always means a reduction in emissions, especially CO₂ emissions and potentially significant savings for customers. It is vital that the industry continues to be increasingly environmental conscious, which is why reduced temperature asphalt ranks high on the agenda of authorities worldwide.”

According to the German Asphalt Association, a temperature reduction of 30 °C alone saves 0.9 litres of heating oil (or a fuel equivalent) per ton of finished asphalt.

Lenarz added, “At a daily production rate of 2,000 tonnes of mix this corresponds to a savings of 1,800 litres of oil, or up to three-quarters of the energy required to heat a single-family home for an entire year. In addition, this corresponds to a reduction in CO₂ emissions of 6,000 kg per day. The figures that can be achieved in the real world are even higher, primarily because the reduction in temperature often reaches 50 °C or more.” 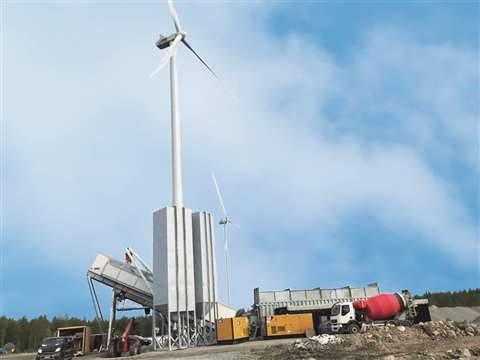 The business required a mobile batching solution with ease and speed of mobility for its sizeable number of remote wind turbine foundation projects.

Their Rapidbatch 120’s compact modular design is easily transportable and can be fully erected in one working day, reducing downtime. The plant’s integral 3m³ Rapid twin shaft mixer batches up to 120m³ per hour of high quality, homogenous concrete. The mixer’s arm design allows fitment at either 60°/90° and creates an area of high turbulence ensuring a homogeneous mix, in a reduced space of time.

To ensure maximum output of concrete in adverse weather, the Rapidbatch 120 was fully winterised to include insulated composite cladding, lined doors and a heating system for aggregates, water and the integral Rapid twin shaft concrete mixer.
TBA 4000 mixing plant installed in Belgium
Bodarwé, the Belgian construction company, recently commissioned a Benninghoven TBA 4000 mixing plant. In total the mixing tower stands 42m high and is part of the new plant that will be run by Boreta S.A., a subsidiary of Bodarwé in Baugnez near the Belgium town of Malmedy located south east of Brussels. It will produce quality asphalt in a variety of recipes, directly from the quarry. 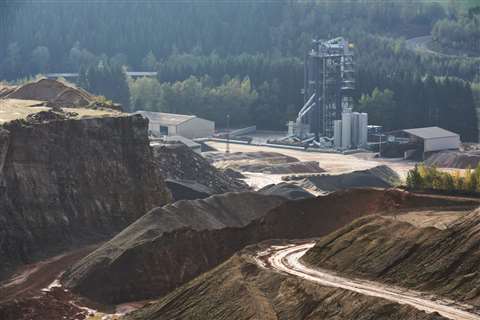 The construction company can use the new plant to produce and ship out large volumes of up to 320 t/h, thanks to a range of optional technologies.

Day-to-day reserves are provided by the mixed material loading silo, which has a capacity of 341 tonnes. Some of the asphaltic mixtures produced will be sold on, while others will be used within the company as Bodarwé maintains a fleet of construction machinery from the Wirtgen Group.

The Bodarwé paving teams process the bituminous mixture with finishers from Vögele and rollers from Hamm. The Bodarwé plant can achieve recycling rates of up to 70% due to two key technologies, a multivariable feed system and a parallel drum.

Benninghoven classifies its recycling technologies into two types, cold feed and hot feed systems. Multivariable input is a cold feed system technology, which feeds up to 40% old asphalt directly into the mixer.
SBM wins major concrete mixing contract
SBM Mineral Processing has gained the biggest order in the company’s history, which will be to provide concrete mixing plants for a huge traffic corridor between Denmark and Germany.

Femern Link Contractors, awarded the Tunnel Portals and Ramps, Tunnel South and Tunnel North Contracts in 2016 by Femern A/S, has placed the order to supply the plants to Austria-based SBM.

Femern A/S is a subsidiary of the Danish, state-owned Sund & Bælt Holding A/S. The company is tasked with planning, building and operating the fixed link. 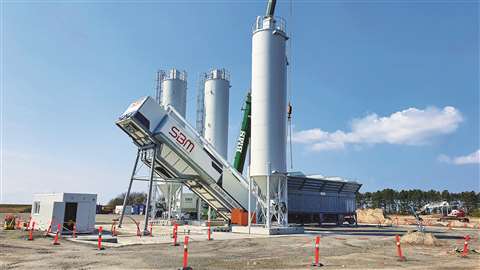 The EUROMIX 3300 SPACE mobile mixing plant will produce concrete
The Fehmarnbelt Fixed Link Project is the final stage in the realisation of a straight traffic corridor between Lolland in Denmark and Fehmarn in Germany, across the Fehmarnbelt.

The link will accommodate four lanes of road traffic, two emergency lanes and two railway tracks. The project comprises the design and construction of an 18km long immersed tunnel, estimated to be the world’s longest and the longest tunnel for both road and rail traffic. 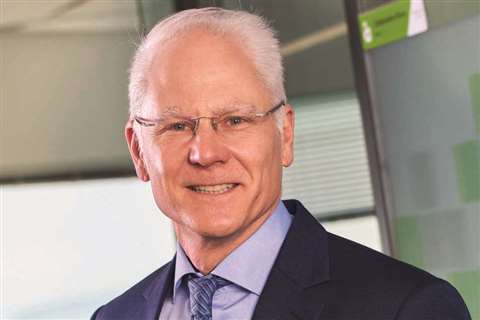 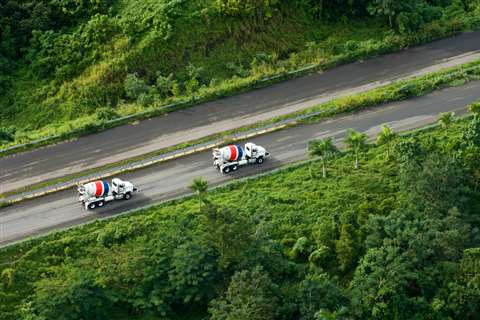 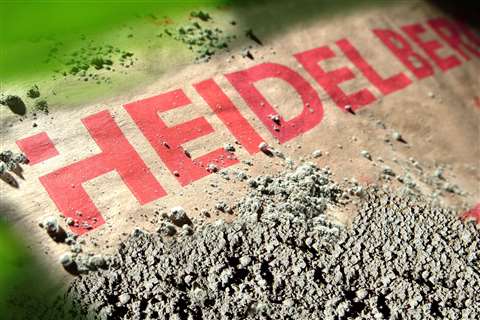 Sweden to host world’s first carbon-neutral cement plant
HeidelbergCement facility will capture up to 1.8 million tonnes a year of CO2