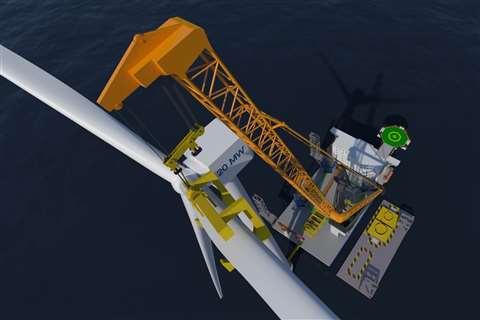 One of the world’s most complex and hazardous construction projects has concluded, 12 years after it began.

Consortium partners Vinci Construction Grands Projets and Bouygues Travaux Publics symbolically handed over to the Ukrainian authorities, the keys to Chernobyl New Safe Confinement (NSC) – an arch built to cover the remains of the nuclear plant’s reactor number 4, damaged in the disastrous explosion and radiation leak of April 1986.

The NSC – designed to enclose the temporary shelter, or sarcophagus, built to cover the reactor immediately following the disaster – is the largest moveable land-based structure ever built. It is 162 m in length, 108 m high, spans 257 m and has a total weight of 36,000 tonnes.

Over the course of its construction, as well as the two main contractors on the build – and the specialised lifting and transport company Mammoet – many organisations were involved in the NSC project, including the European Bank for Reconstruction and Development, the Chernobyl Nuclear Power Plant and Bechtel, the contractor managing the project.

Also, in the 12 years since the NSC project began, it is reported that more than 12,000 workers and technicians came on site, putting in a total of approximately 33 million working hours, without any major work accidents or radiation-related incidents.

Patrick Kadri, Chairman of VINCI Construction Grands Projets, said, “It took a lot of audacity, vision, and a fair amount of madness to embark on this project. The challenges were monumental: to design a state-of-the-art prototype in an extremely constraining environment, constantly pushing against the limits of know-how, striving to secure the cooperation and endorsement of all the stakeholders worldwide, inventing materials that did not exist and unique construction methods.

“This project occupied a major part of our working lives. And we are all aware of the environmental progress that this achievement represents for Ukraine, its neighbouring countries and the whole of Europe.”

Marc Adler, Deputy Chief Executive Officer of Bouygues Travaux Publics, said, “Each of our trades really went into overdrive and surpassed themselves: the engineers, the radiation protection people, the employees in charge of executing the work, the project managers…not to mention the people in charge of human resources, who recruited staff in more than 30 countries.

“Chernobyl will be known in the history of civil engineering as a concentrate of innovation, and the engineers who took part in this project are already transmitting the teachings of this outstanding endeavour in engineering schools.”