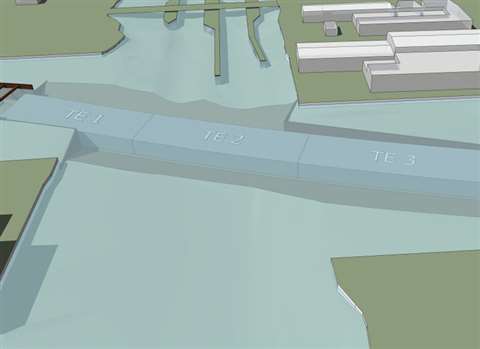 An artist’s impression of the Marieholmstunnel in Gothenburg

A joint venture led by Züblin Scandinavia, a Swedish subsidiary of Strabag, has been awarded a €170 million design and build contract for the Marieholmstunnel project, an immersed tunnel passing under the river Göta älv in the city of Gothenburg, Sweden.

Marieholmstunnel is a road tunnel consisting of three lanes in either direction, with a service tunnel in the centre and a designed lifetime of 120 years. Züblin will construct three tunnel elements of 100m each on site in a drydock, and immerse them at their final location in a trench dredged into the riverbed.

On either side of the immersed tunnel section, cut and cover tunnels will be built in deep excavation pits continuing in ramp and trough sections.

The installation of all mechanical and electrical systems also forms part of the contract, which includes an option to operate and maintain the tunnel for five years after completion.

The tunnel will be handed over to the Swedish road and railway authority Trafikverket in October 2020.