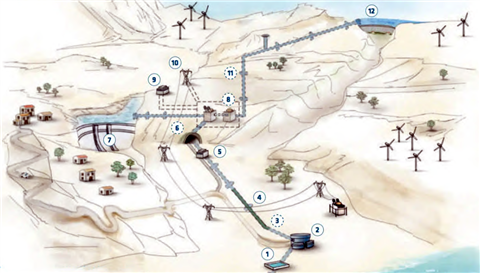 As well as the hydroelectric plant, the project includes the construction of a seawater desalination station and associated marine works, as well as facilities for the plant’s connection to the hydrological transport network.

It is understood that 91% of the project’s infrastructure will be installed underground, minimsing its visual impact.

The plant’s developer, Spanish electrical energy operator Crimson Eléctrica de España, says it expects the 3.5GWh storage plant to be partially operational by 2026, with completion due by the end of 2027.

When completed, the facility’s 200MW of energy output will equate to more than a third (36%) of the island’s peak electricity demand.

While the total investment in the plant is reported to be in excess of €400 million, the Spanish government says it expects to recoup around €122 million a year, through the island’s increased energy independence, as well as the decreasing need for fossil fuel imports.

Currently, less than 20% of Gran Canaria’s electrical requirement comes from renewable energy; the figure will rise to approximately 51% following the commissioning of the new hydro plant.

The plant construction project is expected to generate more than 4,300 jobs, with over 3,500 of them likely to be offered to residents of Gran Canaria.

Spain’s minister for ecological transition and demographic challenge, Teresa Ribera, said the Salto de Chira project was an example of the path the country must take to promote clean, cheap and efficient energy.

She said, “Storage is going to be one of the key pieces of the energy transition, both for its contribution to electrification and for its ability to provide renewable energies with manageability, something especially important in non-interconnected systems such as the Islands.

“It is at this point where the Salto Chira will represent a great advance, improving the guarantee of supply, the security of the electrical system and renewable penetration. With projects like this, and the firm commitment to renewables.”