Why demolition standards are boosting the reputations of European contractors

Despite everything that Covid-19 has thrown at it, Europe’s demolition industry has lost none of its innovation or ingenuity.

The strength of solutions on offer was summed up by Jim Graham, principal of US-based company Winter Environmental and one of the nine-strong international judging panel that ultimately decides the award winners, who felt 2021 was the best year yet.

“There are some incredible applications in each category,” he said.

Covid 19 and the demolition industry
“This has been by far the most challenging year I have had as a judge. The quality of the projects has shown a consistent improvement, and this has amplified the global desire to be recognised by industry peers as first class.”

While the shortlists themselves comprised entries from four continents, there were several from Europe that could be said to meet Jim Graham’s description.

Take for example the UK-based Coleman Group, which was appointed demolition contractor for capital delivery as part of the Euston HS2 rail project enabling works. The company was responsible for demolishing a section of the live railway station to allow the construction of the London terminus of the new rail link.

There were several key challenges to overcome to successfully deliver the project, most notably the demolition of a structure still connected to a live and operation railway station. In total over 2,220 t of concrete and 550 t of steel was demolished and cleared without impacting one of the UK’s busiest stations.

This was the Vinci station in Lyon, France, owned by the country’s national railway company SNCF.

In this genuinely international project, Despe used the cut and drop technology, developed in Japan, that it had first employed during the first stage of the project in 2019.

Vinci, Despe and SNCF
Despe said the use of this system for the Lyon station hall allowed it to develop new knowledge on the behaviour of buildings. It tested a new demolition method based on the reversal of the standard sequence, reducing or even eliminating the use of large machinery.

First, Despe conducted the international deconstruction of the building, leaving just the bearing skeleton structure and the roof. Once this operation has been completed, the support pillars were replaced at ground level with hydraulic jacks controlled by a PLC system.

Despe of Italy develops new knowledge about the behaviour of buildings

This system allows Despe to bear the load and lift a building with a total weight of over 2,200 t from the base, and the lower it step by step.

Before placing the cut and drop lowering system, the building was prepared by eliminating all the non-structural parts. Furthermore, some specifically calculated metal structural reinforcement elements were also applied.

At the opposite end of the spectrum – both in terms of the project and geographically – is the Voronezh nuclear power plant in Russia.

This was built between 1981 and 1992, only for 90% of it to be mothballed. It remained unfinished until the start of 2020, when the Rosenergoatom Concern JSC signed an agreement with demolition contractor Volgaspetssroy to dismantle the power station.

The water treatment building is 17.7 m high with 60 cm thick walls and floor, while the upper part of the reactor compartment is a metal dome that is 67 m high at its peak with cylindrical walls that are 1.6 m thick. 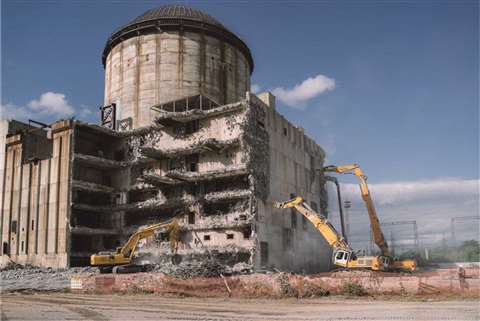 Elsewhere in Russia, the Crushmash Group helped implement the programme to terminate the open-hearth production of the Vyksa Metallurtical Plant.

Crushmash Group
In the project, Crushmash’s specialist staff dismantled industrial buildings and reinforced concrete pipes with a height of 80 m.

Along with several other industrial facilities on the site, the open-hearth plant consisted of reinforced metal structures, so dismantling it required a combination of manual and mechanised methods. Metal structures were manually trimmed ahead of mechanical dismantling, and four reinforced gas pipes were manually dismantled due to the density of the industrial development nearby.

After these were lowered from their original 80 m height to 25 m, the excavator started dismantling.

All the dismantled equipment, as well as some of the metal structures, were to be preserved intact and transferred to the customer’s museum.

Returning to the UK capital where this tour of European demolition started out from, the works carried out at London’s Paddington Square by Erith Contractors are paving the way for the creation of the Renzo Piano designed Paddington Cube due to open in 2022. This phase of works included demolition of existing structures, basement demolition, site wide excavations, top-down-bottom-up hybrid basement construction, break out of the ticket hall slab, installation of piles, tunnelling works to establish connection of the London Underground box to the existing platform infrastructure as well as the construction of the new road, sewer diversion works and substation relocation.

Erith remained in constant communication with St Mary’s Hospital, Royal Mail Group, Network Rail, Transport for London, London Underground, London Ambulance Service, Santander Bikes and Westminster City Council during the works – not least because the site is located on a blue route for ambulances between Paddington Station and St Mary’s hospital and Erith was commended by the hospital staff for ensuring that the route remained clear to ambulances.

Cantillon’s Blossom Street project marks the company’s largest ever contract, and the first to incorporate a major substructure package.

Described as one of the city’s complex demolition projects, it required Cantillon to demolish six buildings across three sites, and to overcome challenges including working adjacent to a main line station, and above two London Underground lines; facilitating a 20-week archaeological dig with Historic England and MOLA (Museum of London Archaeology); retaining three historic façades from the 18th and 19th century; and protecting numerous key assets including adjoining properties and a Grade II listed Georgian cobbled road.

Deconstruct UK
Deconstruct UK was employed by Royal London Asset Management to undertake the demolition and redevelopment of Castlewood and Medius House on New Oxford Street.

Castlewood House, a post-war building, was predominantly a brown brick façade above a single-storey stone plinth. It was solely office use, from lower ground floor to level 08.

Medius House has buildings on the other two sides and limited access. The existing building was six storeys, with a three-storey courtyard area to the rear. The wedge-shaped site measured approximately 18 m (59 ft) in the north-south direction and 25 m (82 ft) in the east-west direction at its widest point. 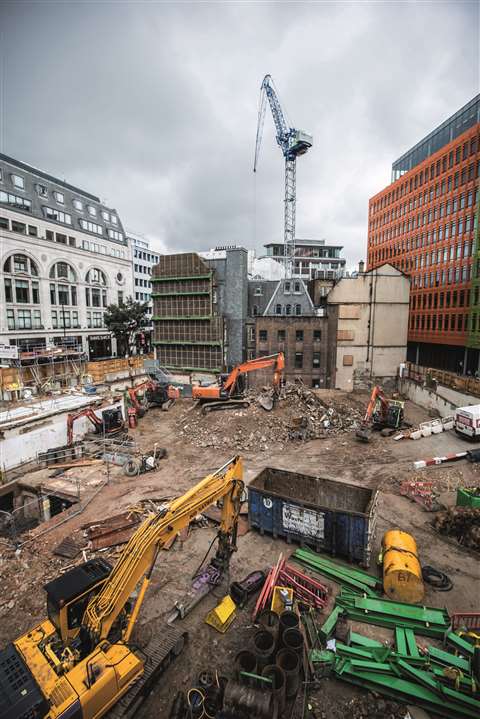 Key to the success of the project was the advancement and off-site construction methods employed to facilitate the facade restraint system installation enabling the demolition activities.

The well documented skills shortage and the problems of attracting the next generation of demolition industry workers are close to, if not at, the top of the corporate agendas of many large contractors and the industry’s trade associations.

During the summer of 2021, negative publicity surrounding the carbon footprint of demolition projects as opposed to repurposing buildings was picked up television programmes as diverse as the BBC News and UK broadcaster Channel 4’s coverage of the Tour de France.

And it is fair to say the industry still needs to refine its relationships with its construction counterparts.

But in terms of what is currently happening on the jobsite, there is still much about which the continent’s demolition industry can feel positive.