The UK’s High Speed 2 (HS2) rail project has announced the completion of what it believes to be the world’s longest box slide, with a 12,600 tonne bridge now in place over a major motorway in Warwickshire. 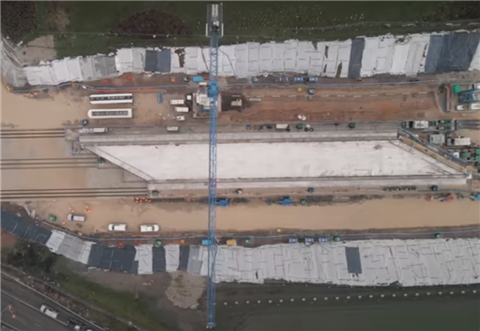 The 12,600 bridge being manoeuvred into position in Warwickshire, UK. Image: HS2

HS2, which is working with the UK’s National Highways on the project, praised a team of 450 people, who worked around the clock over the Christmas period to ensure the bridge was in place ahead of schedule.

The manoeuvre took just over 40 hours to complete, with the bridge being pushed over a distance of 165m, at a rate of 4m per hour.

The 86m-long bridge structure, comprising a base, three walls and a top slab, was built next to the motorway, over a six-month period, before being slid into place on a mechanism designed by the civil engineering specialist Freyssinet.

A time-lapse video of the construction and ‘slide’ of the bridge can be seen here.