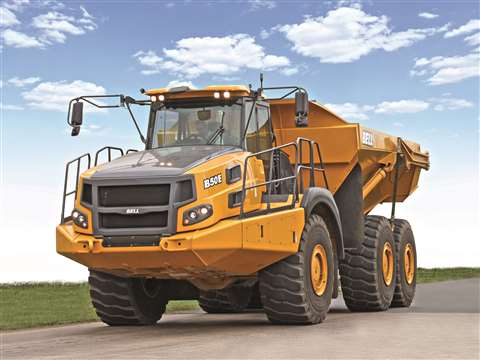 They are the sturdy workhorses, expected to cover all terrain in all weathers, and to deliver larger loads, faster than ever before, and with fewer hours lost to downtime.

Articulated dump trucks (ADTs) are fulfilling the increasing demands of jobsites worldwide – and putting pressure on their rigid rivals by becoming larger and more robust.

The Volvo A60H articulated dump truck (ADT) is a case in point; launched at Bauma 2016, in Munich, the vehicle has a 55-tonne load capacity, around 40% greater than the next largest Volvo ADT.

At launch, Volvo said it was responding to the demand from customers, who were ready to accept the higher purchase price of the machine for the significantly lower cost-per-tonne ratio of material hauled.

The A60H’s size certainly makes it a viable alternative to rigid haulers, where it has the big advantage of being able to operate on soft, uneven roads and steep inclines. 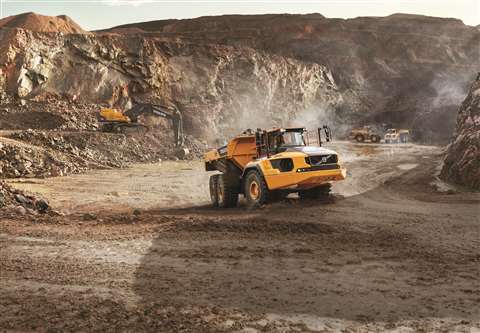 Interestingly, the rear axle of Bell’s B60E is a dedicated 70-tonne truck and haulage axle from Kessler

The other clear advantage with an ADT is the lower maintenance required on haul roads, giving benefits in both time and money.

While the hauler has the standard load-and-dump system, it also benefits from the new dump support system, enabling the operator to improve performance and turnaround time on the dumping spot.

Volvo says the automatic traction controls and the 100% differential locks will take the A60H through pretty much any conditions, while the new hill assist feature will help the operator on steep gradients.

Further enhancements for Volvo’s biggest hauler include its on-board weighing system, which presents the load to the operator, and to the loading tool operator, via a system of lights, and sends data through to the telematics system.

In terms of its serviceability, the hauler has the standard swing-down grille and fully-openable engine hood; what’s new on the A60H, though, is that the belly plate opens hydraulically. 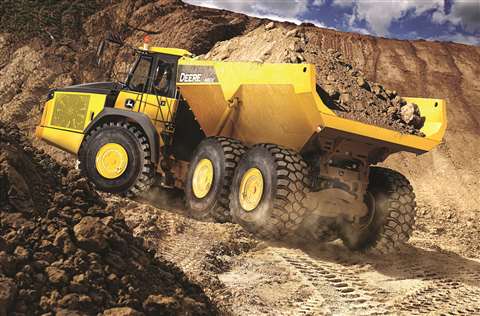 Put a Bell on it

Not to be outdone – especially at Bauma – Bell Equipment took its own big gun to Bauma, as it showed its B60E hauler outside of Africa for the first time.

While the front chassis is unchanged from its smaller cousin, the B50E, Bell has produced a brand new rear chassis, with a single axle and dual wheels, with 4x4 drive – in what is almost a rigid/adt hybrid style.

Bell Equipment’s Product Marketing Manager, Tristan du Pisanie, said, “By combining the ADT concept as we know it with the single rear axle, we came up with a unique machine configuration – a 4x4 with full articulation steering and oscillation joint and that gives us the ability to keep all four driving wheels on the ground and fully utilise the traction that’s available. This gives our 60-tonne truck more off-road capability than any conventional rigid truck.”

The B60E is powered by a Mercedes Benz engine, optimised for off-highway use by MTU, giving Bell the ability to extend its geographic reach and make the B60E available in regulated countries for the first time.

Perhaps we should dig a little more into the differences between this truck’s back end and, say, the Volvo A60H; the back axle is a dedicated 70-tonne truck and haulage axle from Kessler, Germany.

To achieve the 60-tonne capacity the bin is much wider than an ADT and resembles a conventional rigid-type bin. Telescopic cylinders tuck under the bin to push it up in stages during the tipping process.

The suspension is also distinctly different from an ADT concept, and a cradle supports the rear axle with struts being used to create shock absorption for a controlled ride. 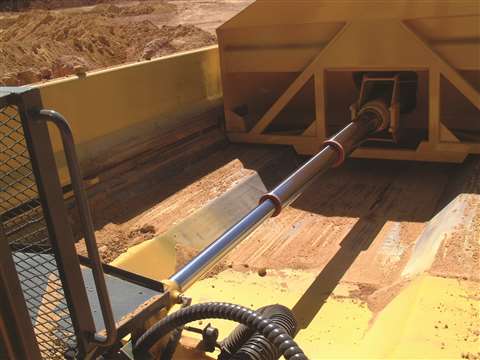 While it seems most manufacturers are responding to a desire from customers to offer larger haulers, not all feel the need to go to the extremes of Bell and Volvo. While John Deere recently produced its largest ADT to date, it has a more restrained payload of 42 tonnes.

That said, there is no shortage of interesting features on the 460E.

On the front of the truck, struts ensure the power to the front axle stays on the ground, while on the rear is a full four-leg adaptive suspension, which means the power being pushed to the back of the machine gets to the ground, moving the truck through the jobsite at a good speed.

John Deere’s E-Series ADTs are also equipped with a cross-axle inter-axle differential lock that operators can shift on the move, taking the machine solidly through soft underfoot conditions.

The firm’s large frame E-Series ADTs have a purpose-built axle – pressure lubricated and filtered, with each individual axle having its own filter and filter manifold, ensuring no cross-contamination from one axle to the other.

The 460E has an automatic rollover protection system, enabled when the operator uses the monitor to set a limit at which it will allow the chassis to be off level. 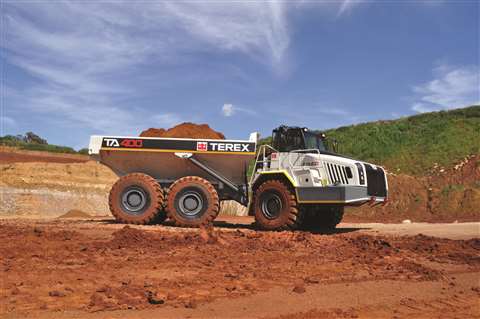 When the operator starts the dump procedure, if the chassis is more than the prescribed percentage off level, the bin will not rise.

Inside the cab, the touch-screen monitor displays useful information, including the gradient at which the vehicle is currently working and a bin position indicator. Payload weighing information is also on the home screen, and the monitor also contains a host of on-board diagnostics, including engine and transmission temperature readouts.

There’s more to it than payload

When Caterpillar introduced its latest and greatest ADT, the 745C, its payload was only a little over 1 tonne heavier than the smaller 740B.

The benefits of the 745C, however, are numerous. Its new Cat C18 engine is 4.2% more powerful than the C15 that drives the 740B. Furthermore, combined with its new CX38 transmission, the 745C can accelerate to 80% of its maximum speed as much as 21% faster than the previous model.

The transmission is one of the highlights of the new ADT; Cat says it has 18% fewer parts than its predecessor, the CX31, and weighs 50% less, cutting over 816kg of vehicle weight. Cat designers were able to add two gears while reducing clutches and gear trains, and Cat says the 9-speed can deliver up to 10% better fuel efficiency.

Not only that, the 745C weighs around 1 tonne less than the 740B, making it an all-round leaner and meaner machine; Cat says its combination of increased power and capacity will make it, on average, 12% more productive than the 740B.

Other new features include new wet disc brakes on all axles; a harder body to reduce wear (by up to 12%, according to Cat); automatic traction control, that manages both cross-axle and inter-axle differential locks; and traction control’s integration with steering, to maximise traction while turning.

A foot in both camps 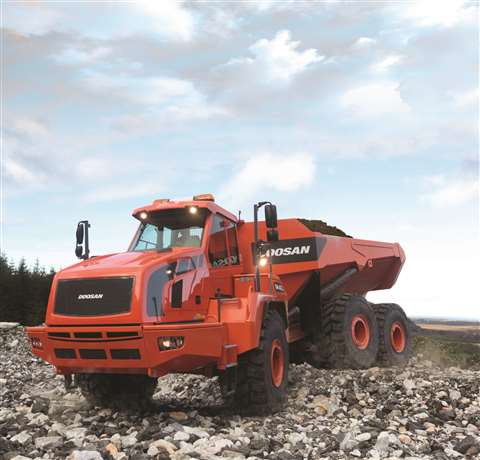 Known primarily for producing large rigid haulers, primarily for mining applications, Terex Trucks also produces ADTs at its factory in Motherwell, Scotland, the largest and newest of which is the TA400, the result of a major and ongoing product renewal programme.

As with its rivals, Terex Trucks is designing its latest vehicles to offer the holy grail of increased performance allied with lower operating costs. It has also focused heavily on protecting the machines’ components and making them more durable, in order to guarantee maximum uptime.

The gen 10 TA400 has force-cooled multi-disc brakes and, supported by an electronically activated exhaust brake, as well as a six-stage modulating transmission retarder, Terex says the TA400 promises longer life for its brake components.

They tend to make things tough in Scotland, and Terex Trucks’ TA400 has some of the most robust components the company has so far placed in an ADT, including upgraded hydraulic hoses, transmission mountings and brake pipes. The company has also introduced magnetic pressure filters to its hydraulic components, to reduce the risk of contaminants entering the system, and keep the hydraulic oil clean.

The TA400’s engine and drivetrain combine with automatic adaptive shifting and a pre-selected two-speed transfer box and the model is fully compliant for all global markets, with the new European Stage IV system complimenting Terex Trucks’ Tier 4 Final range of articulated haulers for the North American market, and the Tier 2 range designed for the non-regulated markets across the world.

Operator comfort and safety is at the forefront of the latest large ADT from Doosan, the 40-tonne DA40. For a start, the vehicle is mounted from the front, via a wide entry platform.

Doosan says its cab is the largest on the market, and it offers both good visibility and impressive noise reduction (72db). There is also extra comfort for the operator with a Grammer seat and space in the cab to place a small fridge, with its own power supply.

The Doosan designers have developed the DA40 with simplicity of operation at the forefront, including the addition of a body-tipping joystick; the operator pulls the stick back, then pushes a button to begin the dumping process; no need to apply pressure on the accelerator means the brake pedal can be covered. Also, as the material begins to slide, the bin automatically moves upwards.

Doosan has also introduced a new method of operating the retarder; when the truck begins to travel downhill, the retarder automatically activates. It is then regulated by pushing on the accelerator pedal.

Back inside the cab, the monitor displays relevant diagnostics, but also offers detailed information on load deliveries, hours worked and fuel consumption.