The oil and gas construction project pipeline in Russia and Eastern Europe has declined by €71.7 billion, as a result of sanctions placed on Russia for its invasion of Ukraine, says the new ‘Project Insight - Oil and Gas Q2 2022’ report from GlobalData. 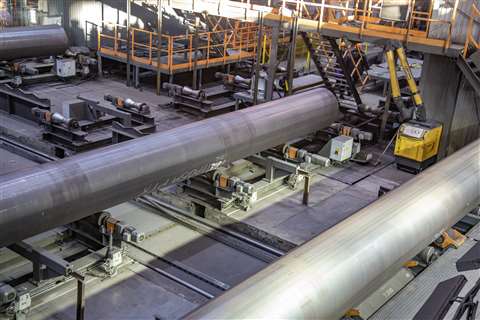 According to the report, which monitors projects from their announcement through to the execution stage, the sector’s construction pipeline has significantly “weakened” over the past three months - falling from a total value of €227.2 billion in the first quarter of this year.

Since Russia began the war in Ukraine, Western countries have imposed financial, trade, aircraft, shipping and immigration sanctions on the country, with the aim of “encouraging Russia to cease actions which destabilise Ukraine”.

With access to intermediate goods and international funds restricted, numerous oil and gas projects in Russia and Eastern Europe have been stopped, claims the report.

Among the current list of halted oil and gas projects is Novatek’s €20.1 billion liquefied natural gas plant, Yamal Arctic 2. While the project is currently 60% complete, its completion - like that of many others - is now uncertain.

Jack Riddleston, construction analyst at GlobalData, said, “These sanctions have weighed heavily on oil and gas project growth in Eastern Europe and caused extensive disruption to activity as countries plan to phase out Russian oil and gas entirely. 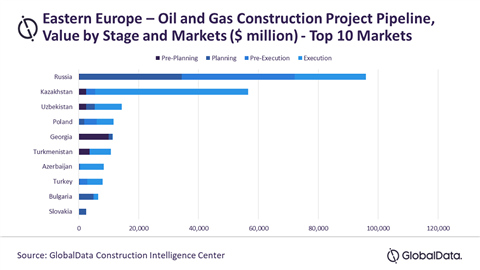 “Projects funded by foreign entities have also had funding pulled and restricted supply chains have forced construction to a halt.”

According to GlobalData’s report, Russia stake in the Eastern European oil and gas pipeline stands at around 40%, “with the total value of projects amounting to €91.7 billion”.

While this will equate to around €31.7 billion in construction spending in 2023 if all the projects go ahead, there are still risks said the report.

Riddleston said, “In addition, the ban on imports will likely continue to suffocate upstream project growth in Russia as alienation from the West has driven down Ural crude prices and consequently driven down export revenue.

“India has been on a Ural oil spending spree and China has agreed to a 30-year deal to import natural gas through the Power of Siberia with plans to extend capacity with a new pipeline in North-East China.”