Only so many ways to dig a hole 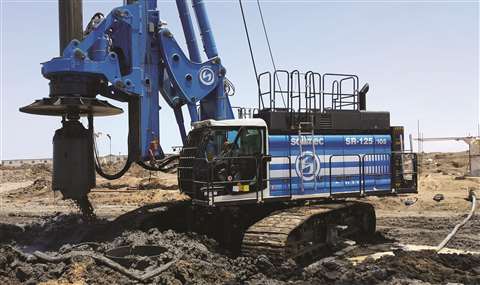 A senior construction industry figure recently said – and not for the first time – “there are only so many ways to dig a hole”.

With all due respect to the great man, I suspect there are a few drilling experts who would disagree with that. Furthermore, the advance of the mechanical technology being utilised in modern drilling rigs is exponentially increasing the options for digging holes, as the next few pages will hopefully illustrate.

In Egypt, for a start, a new Suez Canal project will see a second canal built, parallel to the original, for a distance of around 35 km. The aim is to allow for the passage of super tankers and huge merchant ships.

The project also involves the construction of six road and rail tunnels, plus the development of five ports in Port Said.

The Egyptian Army Corps of Engineers is undertaking some of the construction work, and is carrying out a significant amount of drilling to carry foundation piles. 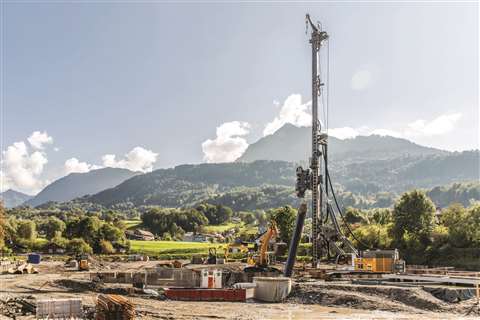 The Army chose continuous flight auger (CFA) piling, the advantage being there is never an open or unsupported pile bore, as with some other bored piling methods.

A number of Soilmec drill rigs are being used on the project, especially the SR-125. This rig is important, due to the fact that its technology has been designed for bored piles and CFA, but it can also be easily converted to perform cased secant piles, a technique using two separate rotary heads, the top driving the CFA auger and the lower head driving the casing.

This method benefited the Army operatives, as the accuracy of the piles could be significantly increased, as well as the speed of production.

The new mast and new rotary on the Soilmec rig ensures a healthy weight-to-performance ratio, and the H-cab has been designed to offer the operator comfort, along with control and monitoring over the rig and technological parameters, in the shape of the 300mm touch screen. 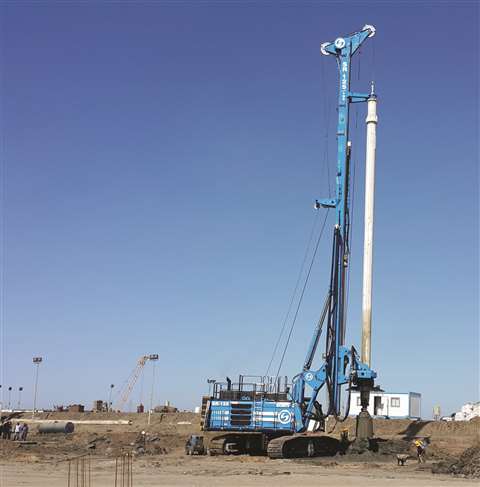 The turret has been redesigned to cut noise levels and, in the LDP version, the rig can perform 121m deep piles, with a maximum diameter of 3,500mm.

At the Port Said job site the SR-125 HIT has been used to perform the bored piles of 1,200 mm diameter to a depth of 74m. The piles were drilled in bentonite through the use of a bucket with soil teeth and with the first 12m cased directly with the rotary head.

In western Austria, in the town of Frastanz, Rondo Ganahi, a company specialising in the production of paper and packaging, is building a new warehouse and extension, as well as carrying out significant modifications to its existing facilities.

Hilti & Jehle was asked to carry out deep foundation work at the site, and sheet piling work had to be carried out on a 7,500m2 area, to lower the groundwater level by some 3m, and secure the foundation pit. 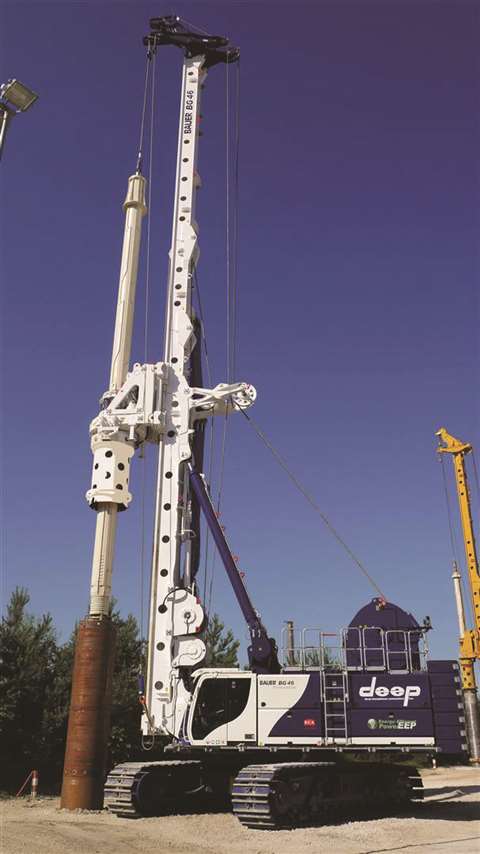 The company utilised an LRB 355 piling and drilling rig from Liebherr, to install U profile sheet piles with lengths of between 11m and 12m.

Benefits of the LRB for the projects included its strong undercarriage and long crawlers for additional stability.

The drill rig features parallel kinematics – a mechanism that allows the head to move on a number of different axes – giving the drill a large working radius.

Another advantage is the assembly of all winches directly on the leader. This enables a clear view of the main winch from the operator’s cab and also ensures that the ropes do not move when the leader is adjusted.

Another German firm, Bauer Maschinen, has its ValueLine and PremiumLine range of drilling rigs, both optimised for very different applications.

The ValueLine rigs are designed for Kelly drilling, while the versatile PremiumLine rigs can be tailored to a number of specialist foundation engineering applications.

One example is the Bauer BG 46, a PremiumLine rig that was first presented at last year’s Bauma exhibition in Munich.

This large diameter rotary drilling rig is equipped with a KDK 550 S rotary head, which provides a maximum torque of 553 kNm. In addition, it is possible to apply a torque of 700 kNm to the drill casing using a mechanically mounted torque multiplier. 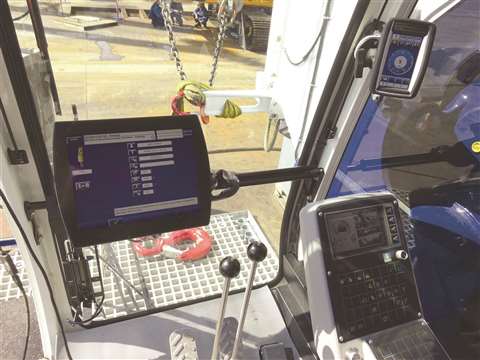 Through these forces, the rig has a capability to install casing deeper and overcome unexpected geotechnical conditions.

At a little over 33 m in height, the machine has a flexible mast and a folding auxiliary boom, which allows the auxiliary winch to be used in all single pass applications without any restrictions.

The optional single-layer piggyback winch allows the complete pulling force of 450 kN to be used in any working situation without reduction, and the design avoids rope jumps, meaning that a longer rope service life can be achieved.

Because of the highly powered base unit of the rig and the dual motor concept of the winch, even at a load of over 270 tonnes, the winch has a lifting speed of 50 m per minute, granting an efficient drilling process.

For Kelly drilling – and depending on the configuration of the drill rig – drilling diameters up to 3,700 mm can be achieved. Using the CFA method, the BG 46 can achieve a drilling depth up to 36 m, with a maximum drilling diameter of 1,200 mm.

Atlas Copco says the FlexiROC T30 R Construction Edition is the only drill rig in the world, in its class, that combines all these options and features.

Uppländska Berg was the first company to take delivery of the drill rig (two, in fact) and, during a recent visit to Atlas Copco’s Surface and Exploration Drilling division in Örebro, members of staff were able to familiarise themselves with the drill rig and tour the facilities.

The silence kit is said to reduce noise levels by as much as 10 dB, a significant benefit when working in urban development. The new, high-performance dust collection system (DCT) features an intelligent cleaning system that promises to secure suction capacity in all conditions. The system can also be equipped with a bag handling system that will further reduce dust levels, while the water mist option prevents dust from escaping into the air by binding it to water.

Horizontal direct drilling is one of the most common methods for laying pipelines underground, with little or no impact on the environment, beneath rivers and other obstructions. Using the HDD method, pipelines are installed in three steps.

First, the HDD rig performs a pilot bore from the launch point toward the reception point. The rotating drill rods are precisely guided along the desired alignment by a surveying system located directly behind the drill bit. The pilot bore is followed in a second step by reaming. After exiting at the reception point, the pilot drill bit is removed from the drill rods and replaced by a reamer. Reaming is usually performed in several passes, until the final borehole diameter is achieved – which is about 30 to 50% larger than the actual pipeline diameter.

In a third step, the pipeline is installed by connecting the prefabricated pipeline to the drill rods. Then, the pipeline attached behind the reamer and a swivel joint, is pulled back to the entry point by the HDD Rig until it reaches its final position. 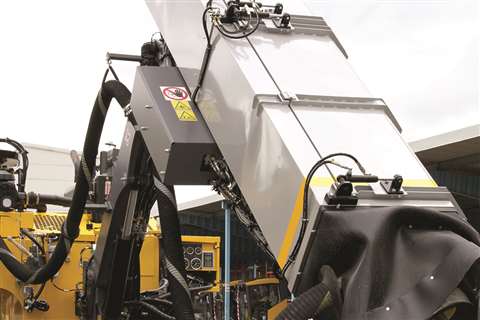 Herrenknecht introduced a range of HDD downhole tools to the market last year, promising significant savings in time and money on drilling applications.

The tools are designed to increase the efficiency of the boring process in a number of ways.

The downhole jet pump initially cleans the borehole and removes the cuttings directly inside the drill string – a completely new method of soil conveyance in HDD. Additionally, it significantly reduces the risk of frac-outs (where drilling mud is released through fractured bedrock), by being installed directly behind the full face hole opener (FFHO). After the cleaning operation, the borehole is almost completely clean.

The FHHO, for excavation diameters of 762mm to 1829mm, enables the contractor to drill and realise the enlargement from pilot bore to final diameter in a single step – in soft ground as well as in hard rock, up to 350 MPa.

The Weeper Sub, in particular with longer drilling distances, also reduces the risk of frac-outs significantly, by gradually increasing the volume flow in the borehole. Therefore, less drilling fluid is required at the drill bit. A clean pilot borehole without major deposits is the result. 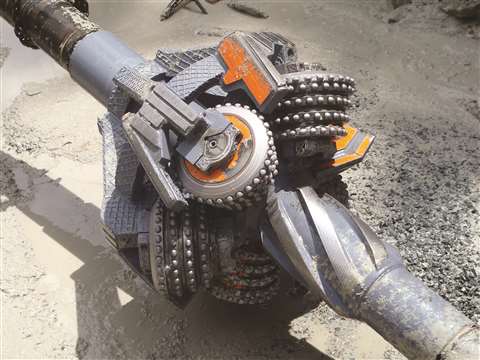 A Herrenknecht HK150C HDD rig was used to drill under a harbour channel, through hard limestone with sections of flint. The contractor needed a very clean borehole, due to the tight dimensions, with only a small annulus between the bored diameter and the 1,016mm HDPE pipeline. The jet pump discharged cuttings of up to 50mm in length, with larger cuttings having been crushed into smaller pieces by the pump, or pushed into softer sections of the borehole.

According to Herrenknecht, the test demonstrated the downhole jet pump opens up new possibilities for the hole cleaning process in HDD.

Ditch Witch has introduced the JT10 HDD rig. The machine incorporates advanced features found on larger units, while remaining the most compact drill in its class.

Powered by an air-cooled, Tier 4 49kW Deutz diesel engine, Ditch Witch says the JT10 is the most powerful drill in its class. With a combination of 44kN of pullback force and a standard 60 lpm mud pump, it promises advanced power and better mudflow, allowing operators to efficiently complete larger-diameter reams on smaller jobs. 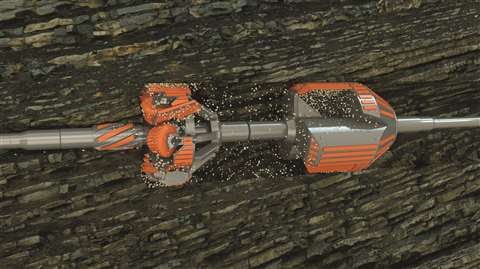 The drill is equipped with an onboard, 150-litre fluid tank, providing additional fluid during short bores and easy cleanup while on the job. And with an onboard drill-pipe capacity of almost 98m, and quicker cycle times than its predecessor, operators can install more pipe in the ground and faster.

Ditch Witch says its JT10 drill rig is the most compact in its class, yet with features found on larger rigs

Finnish manufacturer Doofor, looking to break into the North American market, has launched new versions of its rock drills. It is currently promoting one of its rock drills for use in soil nail drilling – in which closely-spaced grouted steel bars, or ‘nails’, are installed into a slope or excavation to reinforce and strengthen existing ground, as construction proceeds from the top down.

The equipment in question is the DF540L-2M-BLT rock drill, which has the highest torque motors and integrated grout swivel. These features make for the fastest possible hollow-bar installation method. The DF540L-2M-BLT drifter has the percussion of a high-frequency rock drill but the torque of larger rock drills for 30mm, 40mm and 52mm hollow-bar installations. The drill also has a new hydraulic valve system for high-energy efficiency. The flushing head, which is made from non-corrosive material, is designed for very demanding, dusty and dirty environments. 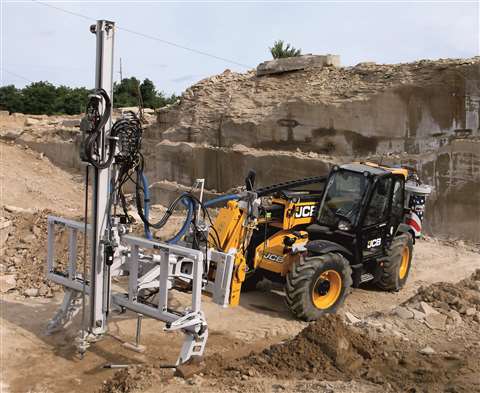 Built on a JCB tractor, Doofor says its DF530X hydraulic rock drill can drill 3m-deep holes in a single pass

The economics of mounting the Doofor rock drill on a 11-tonne excavator or larger, as well as the capital cost, is greatly lowered, potentially offering a quicker return on investment.

Park Industries of Minnesota is using the Doofor DF530X hydraulic rock drill as a key component in its Raptor quarry drill system. Built on a JCB tractor, the Raptor can drill 3m-deep holes in a single pass and the camera alignment system allows the drill to be set and levelled on any surface within 20 degrees of level.

The DF530X can drill up to 45mm diameter holes in hard rock and, according to the manufacturer, offers high penetration speeds while preserving straightness, which is important in dimensional stone drilling.