The importance of improving Europe’s transport network in a sustainable way has resulted in huge spend and increasing demands on road construction companies, as Mike Hayes reports.

Vinci Autoroutes recently announced the completion of a €561 million project to build a new 24km-long bypass in France. 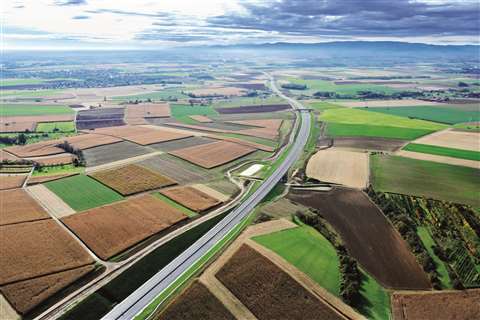 The A335 Western Strasbourg bypass in France (Photo: Vinci Autoroutes)

Not so unusual, you might think, yet very little about the construction of this road was ‘usual’. For example, no less than €130 million of the total cost of the A355 in Western Strasbourg went towards environmental integration.

To offset the negative environmental impact of its construction, 1,315 hectares (13,150,000m2) of land was ‘re-natured’ to allow biodiversity to flourish. In fact, the ‘re-natured’ area is approximately 4.5 times greater than the area covered by the road – and the bypass itself includes 130 passages that allow safe crossing for wildlife.

Furthermore, through the rerouting of up to half of the heavy goods vehicles that use the A35 motorway (renamed M35), Vinci says the A355 will save up to 10 million hours of time lost by drivers each year, helping to lower air and noise pollution in the area through shared, low-carbon mobility solutions.

Vinci called the project a “new generation highway” and said it was “the culmination of a project launched in October 2018 after three years of studies and preparatory work, which involved 6,000 people and over 300 companies.”

The demands on road construction businesses reflect the demands being placed on highways authorities to make roads more sustainable.

How the wheels of industry keep on turning

In the UK, for example, public sector spending on roads reached some €13 billion in 2020/21, an increase of close to €1 billion on the previous year.

What’s more, the UK government is moving forward on a €32 billion programme of roadbuilding over the next five years, with plans for a wider infrastructure strategy beyond that date. The plan is considered the country’s largest ever investment in strategic roads.

In England, the government-owned National Highways agency is working on a Digital Roads 2025 initiative, aimed at harnessing data, technology and connectivity in an effort to improve the construction and use of the country’s road network.

Nick Harris, National Highways’ chief executive, says, “We are at the beginning of a digital revolution in roads infrastructure and expect to see more change in the next decade than we have in the last century.” Elements of the plan include digitally enabled design, modular approaches to construction and fabrication and automated construction.

Another example comes from Sweden, where the country’s transport administration, Trafikverket, recently announced the location for its planned electric road, which will be capable of charging heavy electric vehicles.

If the system proves a success, the government will hope it can play its part in cutting greenhouse gas emissions from transportation, helping it meet its goal of a 70% reduction by 2030.

The project consists of a 21km stretch of the two-lane E20 highway, between the towns of Hallsberg and Örebro, which will include transformers and technology to transfer electricity to vehicles.

Although that technology has not yet been announced, Trafikverket recently part-financed a €9.2 million pilot scheme in the municipality of Lund, with a ground-level feeding system that charges vehicles – with retractable electrical pick-ups – as they pass over it.

The EVolutionRoad scheme has been running since 2020, gathering data from an electric bus running the route for one week in each month.

According to the agency, tender documents will soon be ready for the main E20 construction project, with a final road plan set to be in place by early 2024 and construction work completed by 2026.

As Europe’s roads evolve, so must the equipment and technology used to construct them.

To achieve the stringent quality standards required by today’s authorities, road construction specialists have made huge strides in the adoption of new technology. 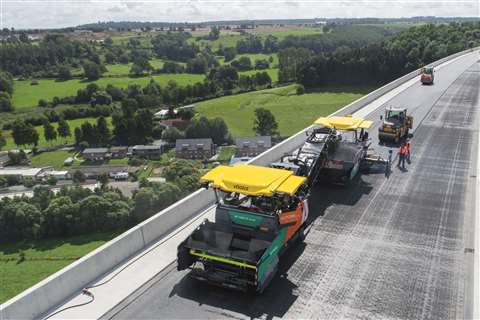 Vögele, a company specialising in paving equipment, recently had machines employed on a project on the 70m-tall and 785m-long Aftetal road Bridge near Bad Wünnenberg in Germany.

The contractor, Franz Trippe, opted to use a range of Vögele technologies on the project.

The RoadScan non-contact measuring system continuously monitored paving temperatures, with current temperature data viewable via a display on the operator’s console. The new Jobsite Temp app also enables the foreman and other users to access temperature data and supplementary data in real time, via their smartphones.

Current pave speeds, screed width, the positioning of the paver and the position of the mix transfer point can also be checked, while Vögele’s WITOS Paving Docu technology records all jobsite processes.

“For example, we work with our own cloud solutions and rely on 3D technology in a lot of our machines to make us even more

efficient and accurate and to meet increasing demands on quality and costs.”

Another German roads project that has benefited from the use of technology is the busy B420 road around Fürfeld in Rhineland-Palatinate. 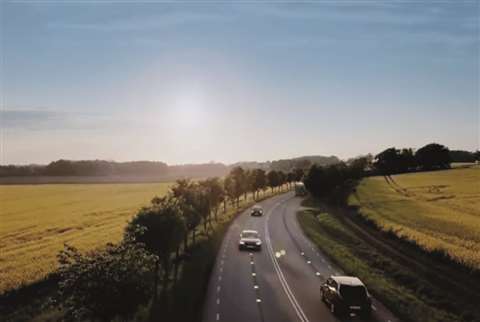 The contractor on the resurfacing project, Matthäi, due to the need to deliver the project quickly and to work around the issue of heavy traffic, caused by regular road closures.

Teams had to lay around 40,000m2 of asphalt and binder in 1km sections, milling some 9,000 tonnes of material, before moving it and relaying it.

Traditionally, the surveying process for resurfacing a road, requires surveyors to hammer pegs into the ground at 5m intervals along the hard shoulder, then measure the transverse profile every 20m, evaluating all the photos, drawing up marking schedules and ensuring all the relevant data is documented.

Instead Matthäi brought Topcon technology to bear on the task. The team used a RD-M1 scanner on the roof of a car, which drove down the entire stretch of road in less than an hour, recording millions of points.

Taking tech on the road

Matthäi’s surveying team leader Frank Pohl says, “On the basis of a thinned-out point interval of 30cm, we received a complete image of the road. We 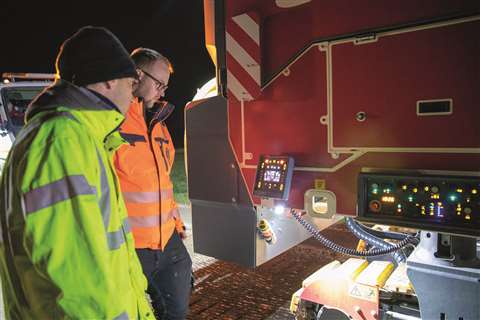 then discussed the critical zones and found solutions to various problems quickly.

“The team were able to smooth out uneven spots in the planning model that could have caused further problems and optimised the geometry in such a way that the incline of the new asphalt surface was a constant 1.5 per cent – leading to a perfect end result.”

The next step in the process was to send the completed model to the milling machinery. Topcon’s SmoothRide system uses GNSS positioning, allowing operators to mill only what is necessary, down to the millimetre.

Raimo Vollstädt, support engineer at Topcon, explains, “With SmoothRide’s components, everything is automated, allowing the milling machine to know its position on the road at all times. This saves a lot of time and means that the machine never has to be adjusted, which is especially beneficial when milling in the dark.

“What’s more, multiple machines can be set to run simultaneously, which makes the process all the more efficient, which is crucial when working to tight deadlines.” 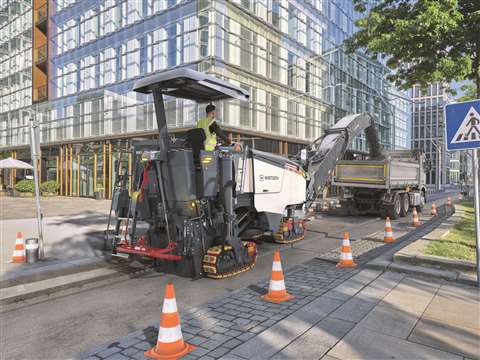 All three models are equipped with a Stage V-compliant 265kW diesel engine from John Deere, which Wirtgen said “use significantly less fuel, even when delivering highest productivity and milling to a maximum depth of 330mm”.

The design of the new models has been based on the company’s larger F series machines and includes digital assistance systems that, according to the manufacturer, enable users to experience the same “high milling performance, efficiency and clear documentation” offered by its larger machines.

The WPT automatically determines area performance rates, milling volumes and the fuel and water consumption of the machine in real time.

Operators of the W100 Fi, W120 Fi and W130 Fi models can access and email machine performance and consumption data reports via a 5-inch control screen inside the machines’ newly developed operator cab, which is available with up to five cameras for improved visibility of the machine and the area around it.

To produce low-temperature asphalt, the plant is equipped with an innovative bitumen foam additive (Photo: Ammann)

When one of its asphalt mixing plants in Germany needed renovating, Makadamwerk Schwaben GmbH & Co knew advanced ecological features were a priority.

These plants are able to process up to 100% recycled asphalt, using a hot gas generator, the temperature of the recycled material is carefully raised inside the counterflow recycling dryer RAH100, with a large steam disposal system allowing for both hot and cold recycling.

With the system placed directly above the mixer, only gravity is used to move the material, reducing the energy input and minimising wear.

Ammann adds that HRT plants are able to produce special mixes, such as mastic asphalt, can be produced without any special requirements.

The new plant was opened in September 2021, and the company’s production capacity has now reached

Keeping it on the level 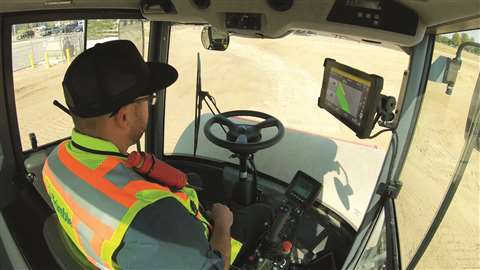 Trimble says steering control functionality is a step on the road to autonomy (Photo: Trimble)

The company says the new functionality is the first of its kind in the industry and marks a step towards its vision of autonomy in the sector.

One of the things that makes it stand out as a product is the fact that the system is compatible across all makes and models, giving contractors with mixed fleets the opportunity to benefit from the technology.

The company says the upgrade – which allows operators to focus on grading, while the compactor travels on an optimal pre-programmed route – has the potential to boost performance and cut costs, significantly reducing overlap and the total number of required passes.

Scott Crozier, general manager of Trimble Civil Construction, says, “It’s difficult to steer a soil compactor with accuracy and consistency, but over- or under-compaction leads to wasted time and materials and less durable surfaces. 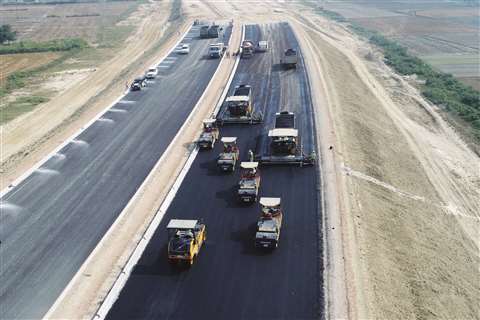 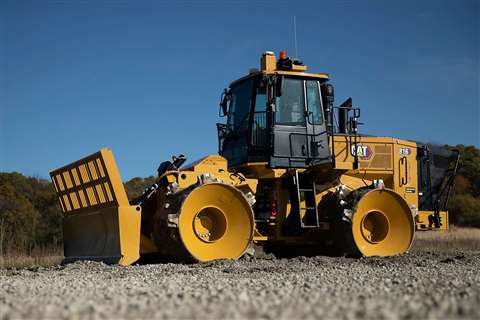 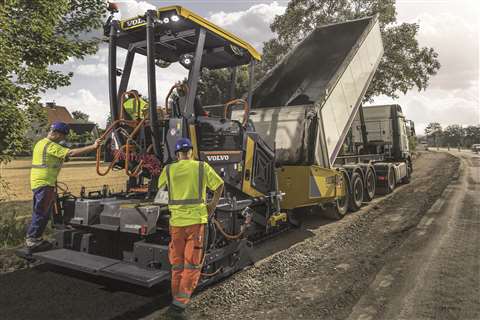 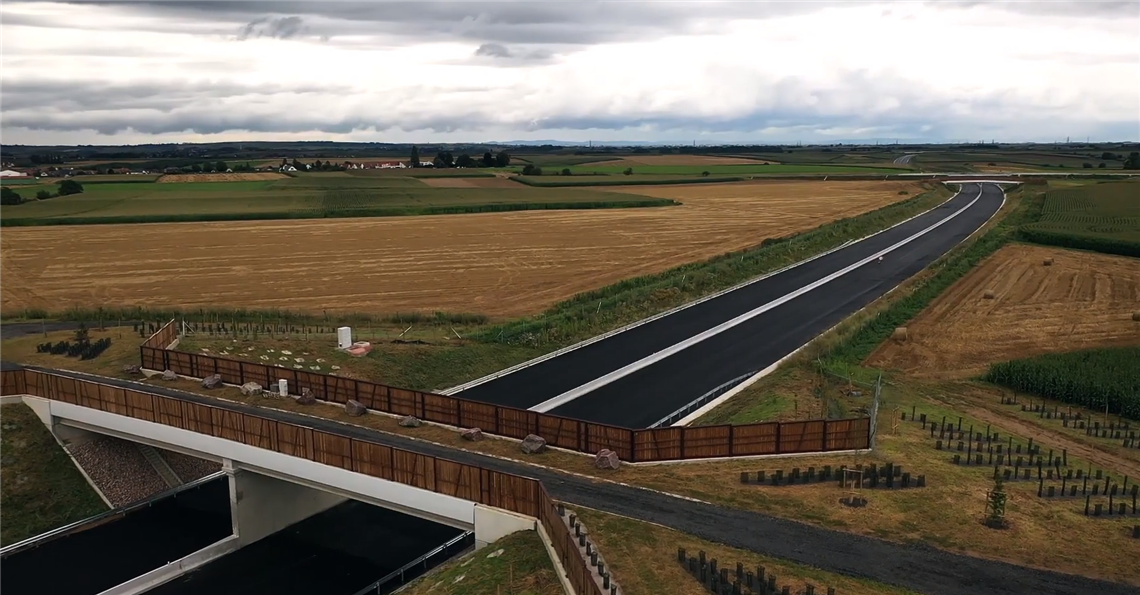 Vinci Autoroutes A355 - from Vinci youtube.PNG 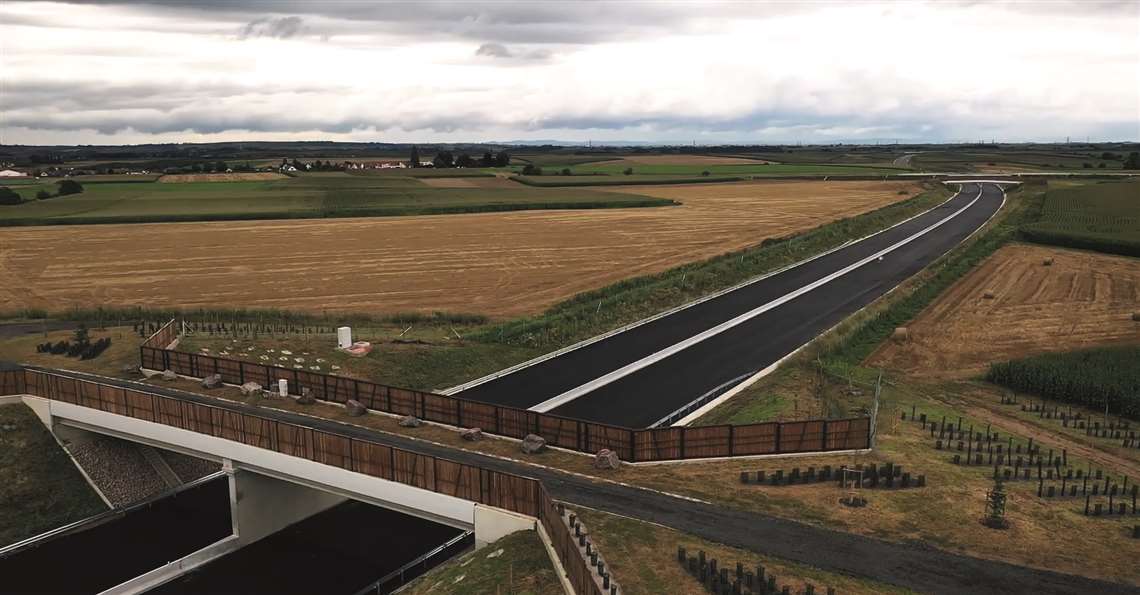 Vinci Autoroutes A355 - from Vinci youtube.jpg 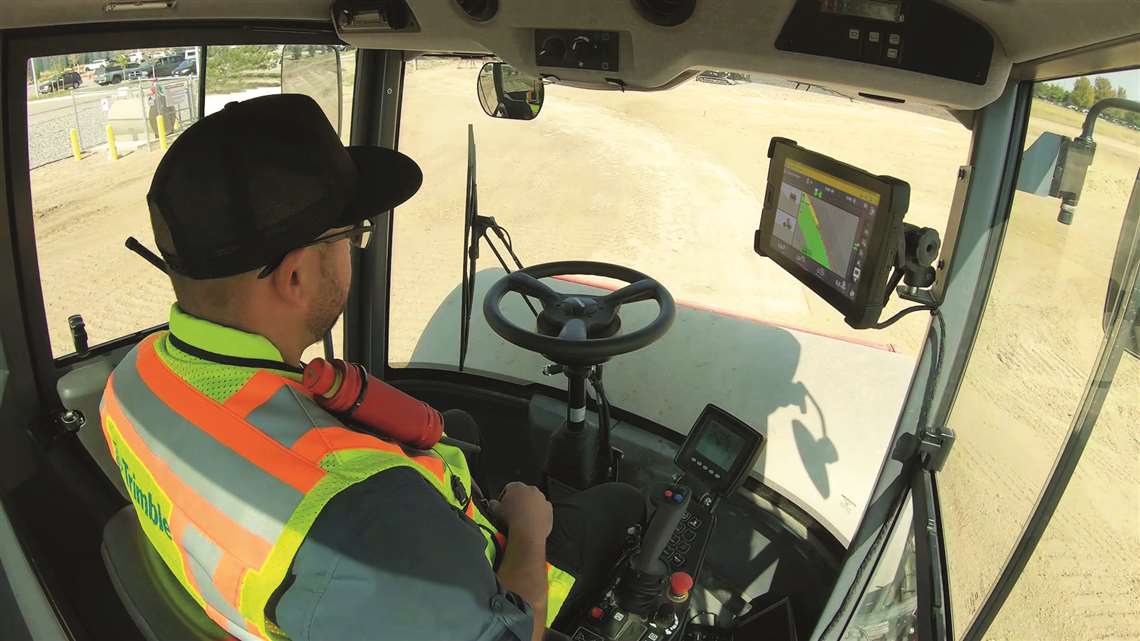 Trimble Earthworks - use this one.jpg

Trimble says steering control functionality is a step on the road to autonomy (Photo: Trimble) 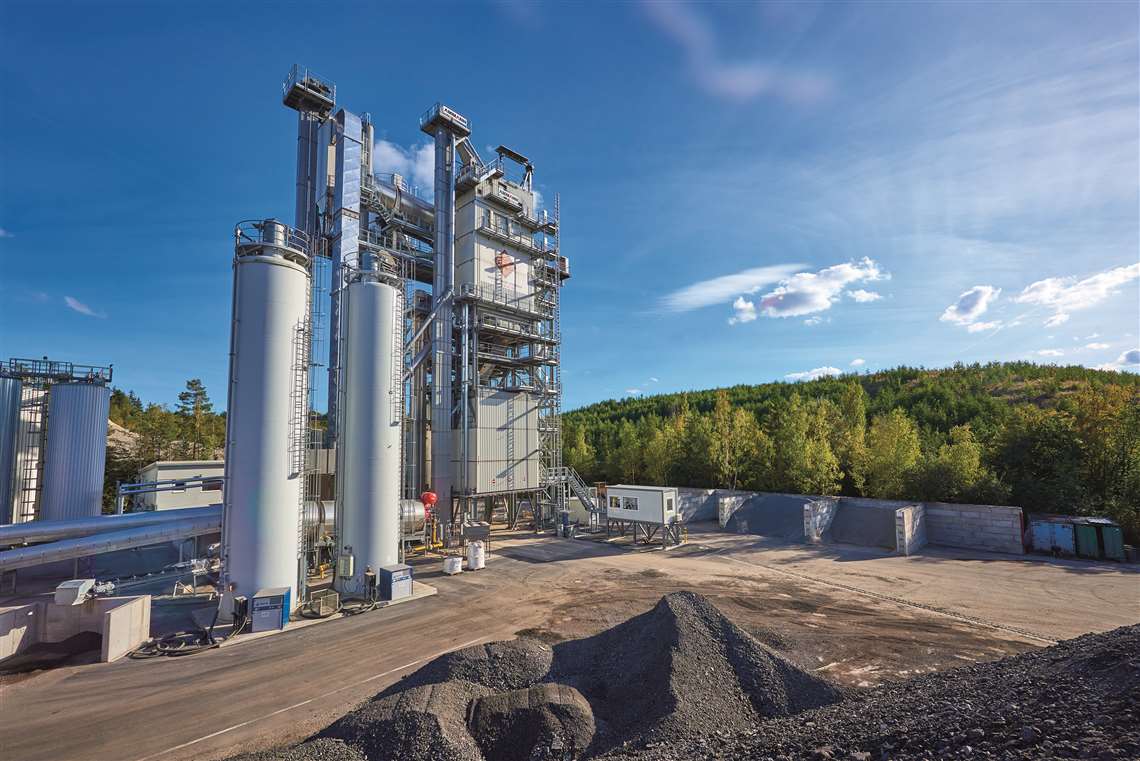 To produce low-temperature asphalt, the plant is equipped with an innovative bitumen foam additive (Photo: Ammann) 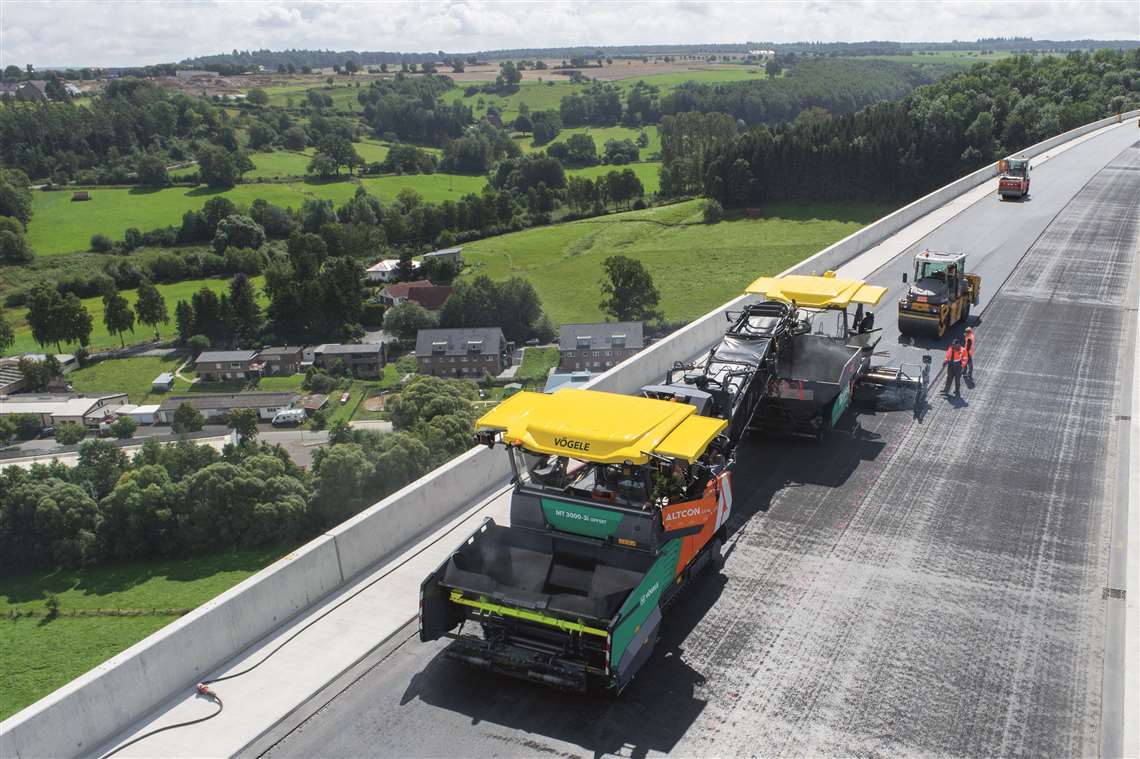 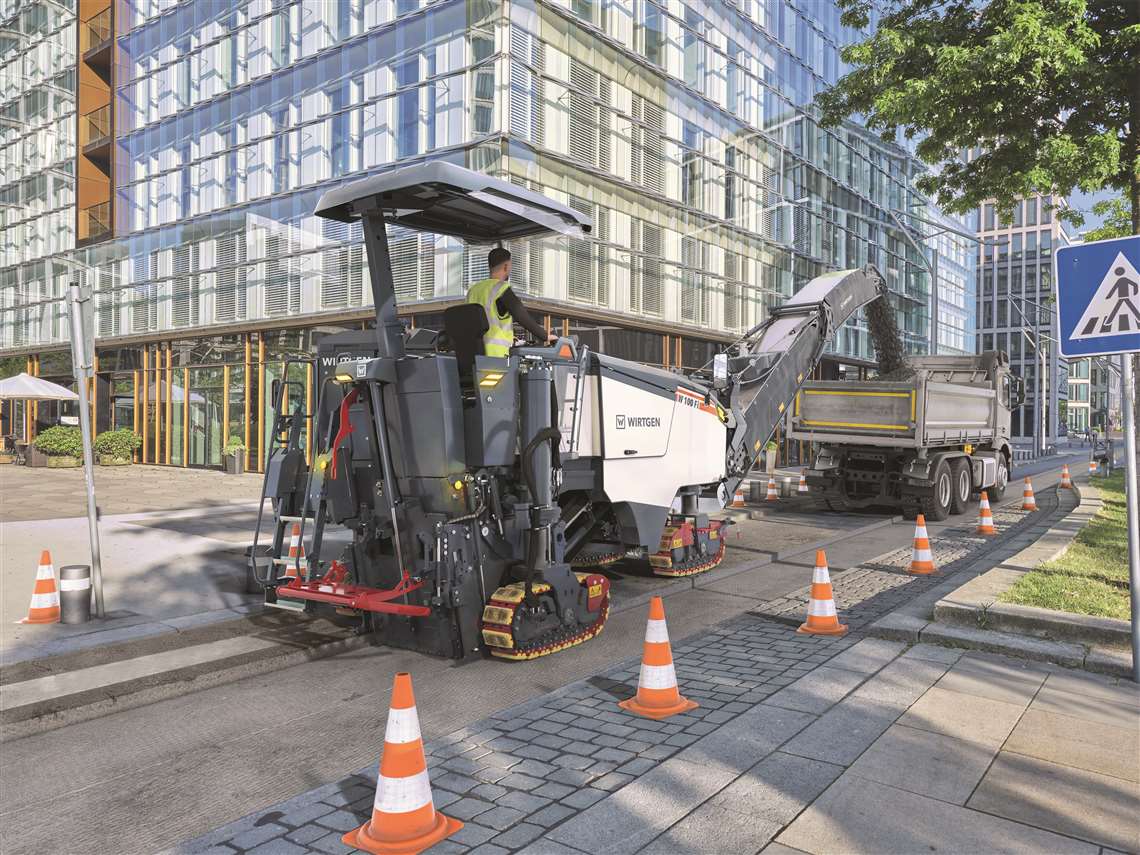 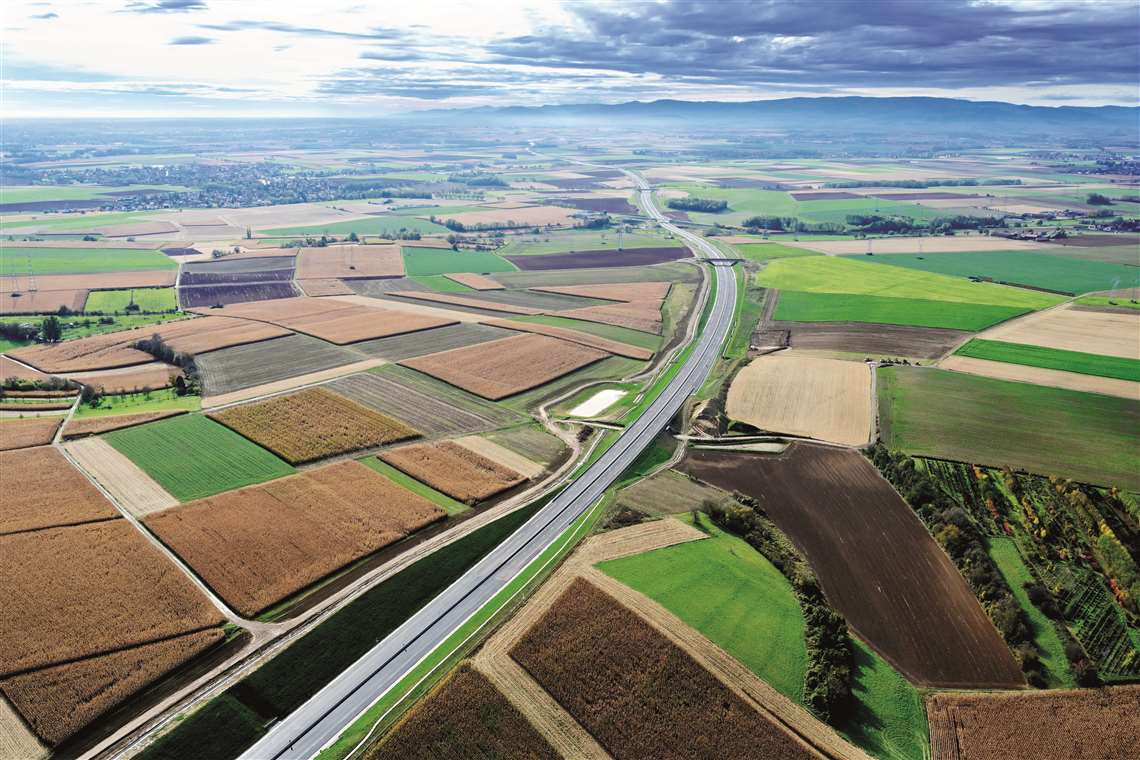 COS copie 2 - use this one.jpg

The A335 Western Strasbourg bypass in France (Photo: Vinci Autoroutes)
Previous Next ×