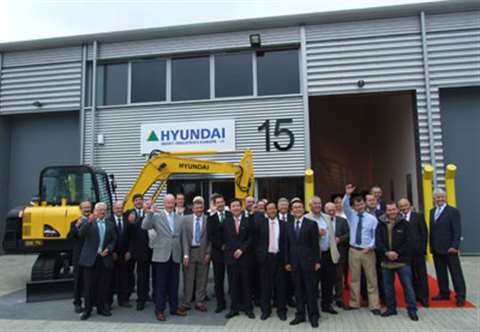 Hyundai has opened a branch office in Bracknell, UK to sereve the UK and Ireland.

Hyundai Heavy Industries Europe has opened a branch office in Bracknell, UK to support customers and dealers throughout the British Isles. The facility was officially opened on 18 July by Eui-youl Lee, executive vice president for sales & product support for Korean parent company Hyundai Heavy Industries. The opening ceremony was attended by representatives of Hyundai's dealers in the UK and Ireland.

Speaking at the opening, Mr Lee said, "From being a total newcomer to the European market in 1992, Hyundai has become recognised as a major player, with significant and growing market share, an expanding product line and a reputation in the market for machines which are extremely reliable, productive and hold the resale values well."

He continued, The market situation is getting harder in the UK and Ireland, but that gives us more opportunity to take a greater share, and by opening this facility we are sending a strong message to the market."

The new branch office will provide a centralised administration centre and point of contact for Hyundai's construction equipment and forklift truck businesses in the UK. In addition to the new facility, last year saw Hyundai open a stock facility at Tilbury Docks in the UK to shorten delivery times.