A high-rise project must be a little bit special to get approval in a town renowned for keeping things low, as Construction Europe discovered.

Milton Keynes is a so-called ‘new town’ in the English county of Buckinghamshire. Local authorities determined that no new building should be higher than the tallest tree, when it was first established in the 1960s.

It did not take long before that notion had to be revised and nowadays tall buildings can be built, but only in specific areas. However, they must first undergo serious scrutiny under the Central Milton Keynes Alliance Plan.

There is also a classification for Exceptional Developments, which has not been met by any building… until now. 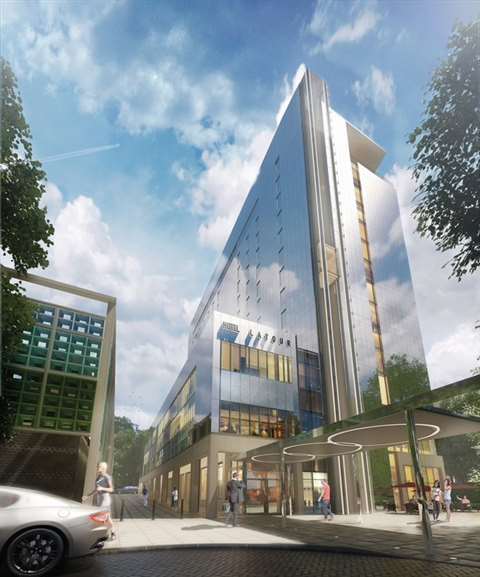 The project broke ground in April 2020, in the middle of the coronavirus pandemic. Surprisingly, it remains ahead of schedule with delivery expected early in 2022.

The prime location, at the top of Midsummer Boulevard and overlooking Campbell Park, will make Hotel La Tour the tallest building in Milton Keynes.

Those working on the project claim views from the higher floors are reminiscent of looking out over New York’s Central Park, meaning that hotel guests appear to be in for a visual treat.

The completed high-rise should look special from the outside with the polished stainless-steel cladding, a panoramic glass elevator and mirrored-glass windows.

However, the centrepiece will be a 30m-diameter steel disc, illuminated red in the evening to represent a midsummer sunset — which notably occurs on the route of Midsummer Boulevard.

Yet in terms of the construction, there are plenty more aspects in this project to be admired.

One week ahead of casting the slab that forms the roof of the  building, Winvic Construction’s Hotel La Tour project manager Russell Sullivan spoke to Construction Europe.

“The highest floor for the skybar and restaurant area is constructed with hot-rolled steel.”

How have the coronavirus and social distancing measures affected the build?
“It seems to me, in terms of materials supply, that it’s impacted finishing items — things that might be made in the Far East, like door handles, light switches, sockets or things like air-conditioning units and radiators.

“Concrete, steel and wood have not really been affected so far by supply issues due to the pandemic — at least not to my knowledge, and not on this project. 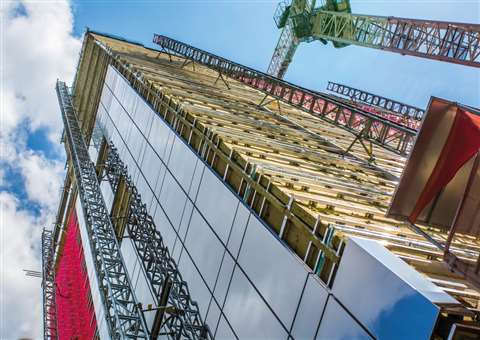 Steel cladding on the exterior of Hotel La Tour.

“In terms of timing, we’ve been quite fortunate, really. If we’d started a year earlier and we were now at the finishing stages of the project, I think we’d have had more supply issues.

“Also, what’s happened is that everyone’s awareness of the Covid-19 pandemic and the potential impact on the lead time of materials has been pricked.

“So we are ordering things more carefully and earlier than we normally would. We’re onto the suppliers more than is usual, asking them ‘Will you really be delivering then?’.

“Take plasterboard, for example, we’d normally get that within two or three days but now we know it’s going to be a couple of weeks. You just have to get your delivery slots booked in in advance.”

This is Winvic Construction’s first hotel build, how did that change things in terms of the process?
“The company has been quite agile with this project. It’s recognised that the supply chain within the company is, not in all cases, suitable for a build like this.

“What it’s done is bring in certain companies that have never worked with Winvic before, but are the right companies for tackling this type of project.

“For example, the company doing the bedroom furniture is Jonathan Carey Design, which produces a very high-quality product — a product suitable for a four-star hotel.

“It’s good that Winvic has adapted and brought in the right company for this prestigious job.”

Can you describe the prefabricated part of the build, the modular element?
“We installed floorless bathroom pods, which I don’t think Winvic have previously used.

“The nice thing about them is that, while they are bathroom pods, you wouldn’t know they were. Often, with these pods, you might feel as though you’re going into student accommodation or a cruise ship, that type of thing.

“These feel completely like a normal hotel bathroom, finished to a high standard, because they don’t have a floor in them. The tiled floor goes down to the in situ slab and gets tiled through the reception lobby and into the room.

“We’ve installed cantilevered decks on the end of the building and they are sized to take these one-piece bathroom pods, which are lifted directly onto them. 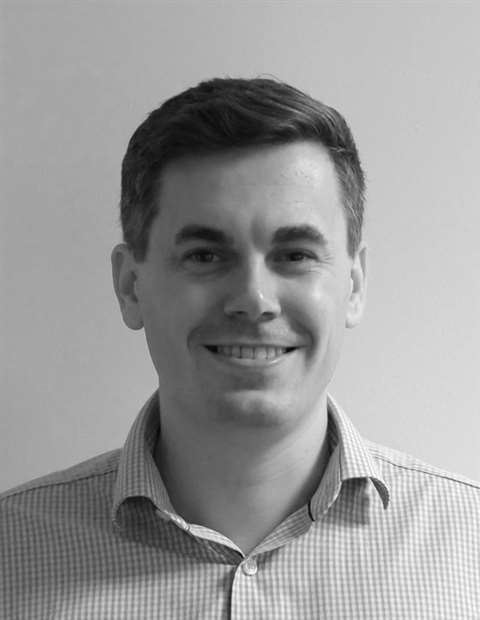 “We’re installing a full floor of bathrooms in one go, so 20 per floor [plus two non-pod accessible bathrooms], which are installed in two days.

“We sequence the work so that the corridor walls get built first. Then the pods are loaded off the cantilevered deck, and positioned against the corridor wall, and into its final position at the first attempt.

“What normally happens with bathroom pods is that you position them where the room is eventually going to be, and build walls around it before finally positioning it up against the walls. What that means is the bathroom pod is just in the way while the walls are being constructed.

“We came up with this method of putting the pod against the corridor wall and acoustically sealing the top of the pod to the structure, which meant we could do it in one attempt.

“One of the biggest advantages of having these pods has been that, in terms of social distancing, we’ve had fewer trades going into small spaces and more work taken offsite — which is good for the new challenges that we’ve got.”

Given that we’ve just come out of a Covid-19 lockdown, have there been logistical problems building this high-rise in the heart of a busy town?
“The shops opened up on April 12th, and the traffic in the area went crazy. But we use Biosite Systems to book all deliveries in, a shared portal that all the contractors on the project log into.

“When they sign their contract with Winvic, they’re given access to Biosite and they book their deliveries in on that system.

“The gate staff who welcome deliveries to the site know what’s coming in and when. Our site managers have the ability to move deliveries around on the Biosite booking system, to give things more time if it’s required. It’s tools like this that give you control and avoid it being a headache.

“That’s also true of the project as a whole, the way we’ve approached it. Sequencing the works to get the corridor walls built before the bathroom pods come in, for example, means you have fewer numbers of workers on site but for longer periods of time. 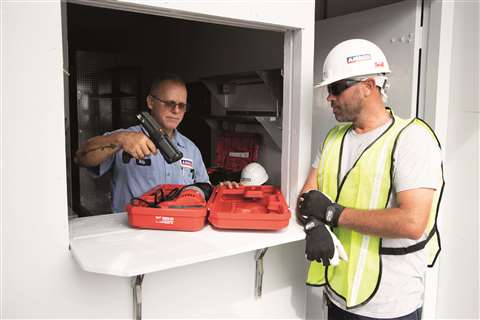 Why the rental sector is expanding its services
Major equipment rental companies around the world are extending the services they can offer
Loading...
More News from Construction Europe

Why the rental sector is expanding its services
Major equipment rental companies around the world are extending the services they can offer
Loading...