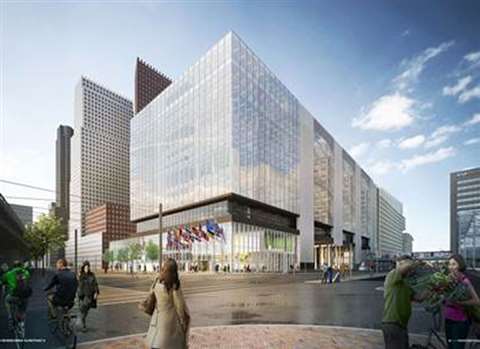 Artist’s impression of Rijnstraat 8, The Hague (Image courtesy of BAM/OMA)

PoortCentraal, a consortium consisting of BAM, ISS and OMA, has been awarded a €267 million contract to renovate and operate Rijnstraat 8, The Hague, by The Netherlands’ State Building Agency.

The renovation works will complete by the end of 2016 with organisations such as the ministry of Foreign Affairs, the Ministry of Infrastructure & Environment, the Immigration & Naturalisation Service and the CAO (central organisation for the reception of asylum seekers) taking occupancy in 2017.

Jan Hoogstad originally designed Rijnstraat 8 in the 1980s. The design for the transformation of the building is made by OMA. OMA developed an integrated concept in collaboration with Jan Hoogstad to transform the existing building into a modern and comfortable environment, and opening the building to the public space.

The PPP concession will run until 2014 and has a net present value of €267 million.