The construction, dredging and rail supply industry has launched an interactive map to highlight the activity of third country state-owned enterprises (SOEs) in the European public procurement market.

How many projects have third country SOEs been bidding in the past? How many did they win? In which countries are they active? What type of projects are they interested in? Big projects or small projects? Bridge construction or road construction? Visual answers to all of these queries are available thanks to an interactive map.

This interaction map provides information about public procurement procedures since 2009, where third country SOEs were successful, unsuccessful and where the result is still open. The geographical focus lies on the EU27, Switzerland, the UK and the Western Balkans. The publicly available map information relates to construction, dredging and rolling stock contracts with a timeline that indicates the number of projects each year.

The FIEC has highlighted the issue of SOEs from third countries bidding for and winning public contracts, including EU-funded projects. There has been a growing interest from third country SOEs in the European procurement market for construction works for over a decade.

FIEC worked with the EIC, EuDA and UNIFE to produce an online interactive map that shows the activities of third country SOEs in the European public procurement market

FIEC highlights unprecedented growth
While the situation has evolved with unprecedented speed over the past three years, experts in public procurement, policymakers, other economic sectors and the wider public are not necessarily aware of the extent of this trend. It was time to change that.

While press articles on single public projects won by foreign SOEs popped up, no comprehensive overview illustrating their successes and their general interest in the market was available.

The facts shown through this joint initiative are telling. While only a handful of projects can be observed in the period from 2009 to 2017, this phenomenon has hastened over the past three years. SOEs from third countries have bid for at least 46 public projects all over the EU, Switzerland and the Western Balkans since 2018, with of these 14 projects won. They were interested in both very large projects with a value of more than €1 billion as well as smaller ones starting from €3 million. 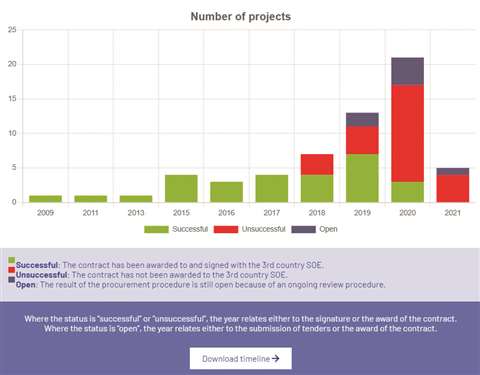 The new website charts all of the European projects in which SOEs have shown interest, regardless of whether they have been successful or not

Chinese construction contracts
The contract for the construction of the Peljesac Bridge in Croatia was signed in 2018. The project with a value of €350m, 85 per cent co-funded through the EU, was awarded to a consortium consisting of China Roads & Bridge Corporation (CRBC) and China Communication Construction Company (CCCC). The price that was offered by the consortium was 26% cheaper than the offer of the European competitor.

A road maintenance contract in Romania was signed in 2018. The project, with a value of €15.7m, saw the contract awarded to Sinohydro Corporation – a Chinese SOE.

The contract for the construction of three worker access tunnels for the extension of the Stockholm Metro Line in Sweden was signed in 2019, each with a value between €8m and €10m. The project was awarded to the China Railway Tunnel Group. The company offered the lowest price, which was up to 50% cheaper than European competitors.

The contract for the construction of the Divaca-Koper second railway track was signed in 2021. The estimated value amounts to €1.2bn. The project is co-funded through the EU. Several Chinese SOEs signalled their interest in the project, but they were excluded at the pre-qualification stage. The contracting authority only accepted reference projects built according to European standards. 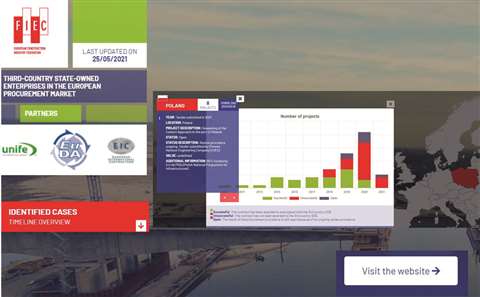 A multifaceted experience across Europe
The data visualised through the interactive map illustrates how complex the situation really is.

All of Europe is concerned, from Austria to Norway. from Romania to Portugal. Not only are Eastern European authorities inclined to opt for the lowest price but Eastern Europe, because of its infrastructure network in development, is of particular interest to third country SOEs.

But not only megaprojects are of interest for such companies. SOEs from third countries wish to build different types of infrastructure. The ability to offer low prices is usually the key for success for third country SOEs, although some contracting authorities are starting to show resistance.

The online interactive map puts together all the information necessary to draw such conclusions, and highlights the complexity of the phenomenon.

In short, it is a tool for a fact-based policy making. The timing could not be better with the EU institutions currently working on legislation on this matter. 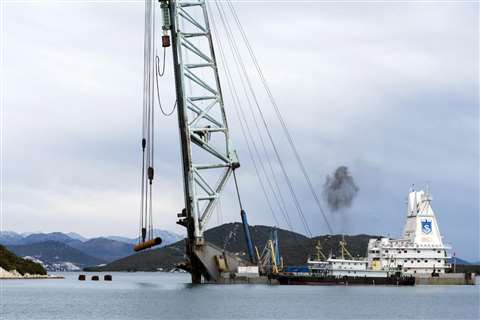