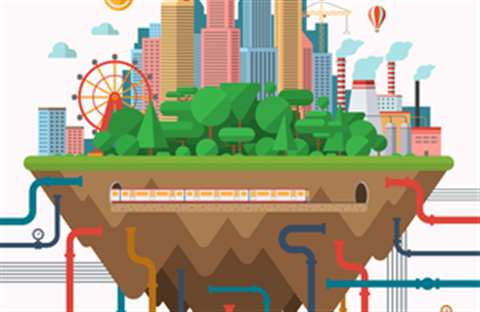 The UK Government has begun building a digital map - known as the National Underground Asset Register (NUAR) - that will document every underground pipe and cable in the country.

Said to revolutionise construction and devlopment nationwide, NUAR is part of the government’s plan to build back better and greener.

It aims to provide an inter-agency resource that will enable construction and development projects to be carried out more smoothly, and will help save money, time and resources.

According to the Government, over four million holes are dug in the UK each year as part of construction and maintenance works to houses, workplaces and infrastructure and utility assets.

However, many of the holes are dug in the wrong place, with the accidental damage to existing pipes and cables costing the economy around £2.4 billion a year.

“Unforeseen ground conditions are a major obstacle to all construction and housing projects, especially on previously developed land. The new digital map of underground pipes and cables will help improve efficiencies in construction and development, reduce disruption and improve workers’ safety,” the Government said.

The build phase of the NUAR project is being carried out by design and engineering specialist Atkins (part of SNC-Lavalin Group), which was appointed to the project by the Cabinet Office’s Geospatial Commission earlier this year.

Atkins, working alongside Ordnance Survey and ISpatialTech, will build a viable product for the North East of England, Wales and London, and will be responsible for rolling it out to the remaining regions in England and to Northern Ireland.

“As Scotland already benefits from a system of this kind in the Scottish Road Works Register”, the Geospatial Commission said it would continue to work closely with colleagues in the Scottish government on future developments.

NUAR, which will take three years to build, will enable critical services - such as gas, water, electricity and telecommunications - to be more efficiently maintained and delivered.

“Fast access to this data will save utilities companies and local authorities time and money, and reduce the disruption caused in trying to fix leaks and put in new infrastructure”.

Lord True CBE, Minister of State at the Cabinet Office, said, “I am delighted to launch the build phase of the UK’s new National Underground Asset Register.

“This new digital map of the UK’s underground utilities assets demonstrates our commitment to putting innovation at the forefront of the UK’s economic recovery and ambition to Build Back Better.

Multiple project partners in the North East, London and Wales have already begun working on NUAR, with a pilot version of the digital map already being rolled out in Teeside.

Ben Houchen, Mayor of Tees Valley, said, “I am absolutely delighted that this innovative new map of what lies beneath our feet is being launched and rolled out in Teesside. This new service will mean less mistakes are made when digging holes and less disruption to local people.”

He added, “Across Teesside, Darlington and Hartlepool we’re making huge strides; we are transforming northern Europe’s biggest brownfield at Teesworks creating thousands of jobs and transforming our economy to a greener future, and this new map will be incredibly helpful.

*If you have any questions about the project, and in particular if you are an owner or operator of buried assets, please get in touch via geospatialcommission@cabinetoffice.gov.uk.