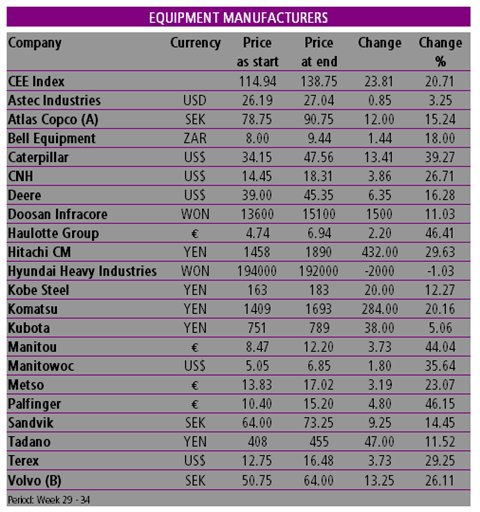 August saw share prices strengthen again on the back of better than expected half-year results. This applied to the markets in general and the construction sector in particular, which achieved its best gains for years.

However, these gains were dwarfed by the surge seen in the construction sector, where the CET Index for the whole industry rose a massive +21,22% to 127,80 points. This took it close to the level it was last September, prior to the collapse of Lehman Bros., which precipitated the stock market crash.

In an unusual twist, it was the materials sector that led the charge, with the CEM Index for this sub-industry rising an incredible +27,48% in the course of the five-week period.

With the exception of Cimpor and Schindler, all the companies in the index enjoyed double-digit rises. Brick, tile and block maker Wienerberger led the way with a +54,70% rise. This was linked to a € 150 million cost saving plan announced in tandem with its second quarter results by new CEO Heimo Scheuch.

Another big riser was Cemex, which announced a plan to refinance some US$ 15 billion (€ 10,6 billion) debt mountain in August. The package includes new securitisation and covenants, and a new amortisation schedule that will see the final maturity of the debt pushed back to 2014.

Another component was a proposed US$ 1 billion (€ 700 million) share offer by the middle of 2010. It was welcome news from a company that was seen as a bankruptcy risk earlier in the year, and Cemex's share price rallied accordingly.

Other companies to enjoy above average gains included Holcim, Italcementi, Saint-Gobain and Wolseley. Wolseley was a little suprising, rising strongly in the face of a downgrade from Japanese investment bank Nomura. On the positive side, there were signs of a recovery in the US house building sector, one of its key markets.

While the normally subdued materials sector rocketed, things were relatively quite in the contracting sector. The CEC Index for the industry rose +14,64% between weeks 29 and 34 - more than the mainstream benchmarks, but less than other parts of the construction industry.

What good news there was seemed to be fueled by up-beat results. Hochtief for example rose and impressive +47,27% on the back of a strong order book and profits that fell less than expected in the first half of the year.

The under-performers included all of the major Spanish construction groups. The best of these was Acciona, which could only manage a +5,49% rise in its share price over the five-week period, although none of them lost ground.

Aside from these, almost all the companies that make up the CEC enjoyed double-digit rises in their share prices. The only excpetion was Ballast Nedam, which fell -3,37%. This did not seem to be indicative of any downward trend in the company's share pirce, but was a case of marginal movement in an esssentially flat stock.

The construction equipment sector was a little more robust over the same period, with the CEE Index rising +20,71% to 138,75 points.

The strongest risers were to be found among some of the smaller manufacturers, with rises in excess of +40% for Haulotte, Manitou and Palfinger. This seems to be in reaction to a stabilisation in the markets, something Palfinger highlighted in its half-year results.

In Manitou's case, there has been a positive reaction to a change of management, with former Alcatel-Lucent chairman and CEO taking over as CEO from Marcel Claude Braud, a member of the family that controls 61,51% of the company. A new group finance director has also been appointed.

Other strong performers included Caterpillar, CNH, Hitachi, Manitowoc, Terex and Volvo. With many of these companies announcing results prior to the period under review, it seems their rise has been due to the general buoyancy of the markets.

At the other end of the scale, noticable under-performers included Astec, Hyundai and Kubota.

August saw the Euro strengthen against all four of the other major exchange currencies. This came on the back of GDP data that showed France and Germany had exited recession, with GDP rising in the second quarter of the year compared to the first. This unexpected lift was accompanied by news that the Eurozone as a whole is almost out of recession with just a -0,1% contraction in GDP from the first quarter to the second.

This helped to strengthen the Euro - most notably against the Yen, with a +2,22% rise - although it also gained against the Pound, Swiss Franc and Dollar.

It was a different story for the other European countries, with the Euro seeing some heavy slides. This was most pronounced against the Swedish Krona, where there was a -8,25% fall, but the Euro was also down more than -4% against both the Norwegian Kroner and the Polish Zloty.

By the end of week 34, construction shares were up almost +25% for the year-to-date and a massive +72% on the low that was seen in mid-March. The more subdued mainstream benchmarks were also in positive territory for the year to date, with the Nikkei leading the way thanks to a gain in excess of +16%.

This of course prompts the questions; How long will the rally continue? and; How far will shares fall back once they've peaked?

It is inevitable that shares will fall back once they reach a peak - if they didn't, then by definition, it wasn't a peak. It is inevitable that as shares climb, investors will be more and more tempted to take their profits, and this could curtail the rally, and lead to a sudden drop-off.

It has to be said that the surge in share prices since the spring has been driven by companies taking swift and decisive action to cut costs. Now that markets and companies are stable, investors will be looking for signs of increases in demand to drive a genuine recovery in share prices.

The improvement in GDP figures may be a sign that a recovery is on the way, but this will need to be reflected in corporate profits and stronger outlooks for shares to stage another rally.