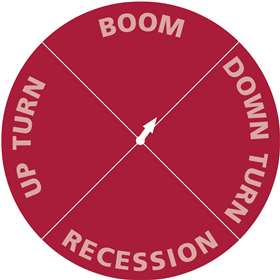 With this month’s CE Barometer teetering on the edge of downfall, confidence has markedly declined in the industry

The outlook in the European construction industry this June has become notably less confident. A balance figure of 19.6% of respondents reported activity to be better in May, but in June a balance figure of just 2.1% thought activity had improved against the previous month.

Although the general opinion remains positive right now, the CE barometer has seen a significant number of respondents (23.7%) that thought activity was worse this month.

When comparing now to this time last year, respondents were very much split into three camps. 37.1% thought that activity was better, 32% thought it was worse than last year and 30.9% said activity had remained the same.

The outlook on the future was less optimistic than it was last month. A balance figure of 12.4% believed that activity will be higher in a year’s compared with the 20.7% that thought the same way in the previous survey. It seems that confidence in construction was much higher surrounding the largest event in the industry, Bauma Munich.

Political uncertainty is still being cited by respondents as the reason for a lack of confidence. This is appearing to have a knock-on

Take part in the July survey for the August Barometer

The survey, which takes just one minute to complete, is open to all construction professionals working in Europe.

A return on investment

In this issue the period of week 20 to week 26 was analysed and in comparison with the four-week period of weeks 16 to 20, the markets look like they are beginning to stabilise.

The total CE Index figure for the period was up 3.08%, whereas during weeks 16 to 20 the Index figure fell by 5.28%. After a mass increase of marketing campaigns during the Bauma period and the hype surrounding the event, share prices quite understandably saw a rise.

The ‘Bauma bounce’ appears to have struck early this year as share prices now seem to be gradually creeping back up for equipment manufacturers and material producers. For contractors, however, there has been a different result; though the group were least affected by the aforementioned bounce, they are the only group whose index figure fell.

The CEC Index figure fell by 1.18% this month, but when you examine why, it appears to have been exaggerated by the major decline in share price for UK-based contractor Kier.

The company’s share price declined by as much as 66.98% during the six-week period. In June, the company announced that it was to cut 1,200 jobs as part of a strategic review. Following the announcement, the firm’s share price fell by 17%. The review itself was estimated to cost around £28 million (€31.9 million), but it is hoped that this move will save around £55 million (€61.2 million) annually.

Having begun with the negative, there were still 13 positive movers in the listed contractors. The best performing being German-based Bauer group (+12.56%). The contractor is involved in numerous global projects and has recently been contracted to construct a total of 112,000 m2 of cut-off wall over a length of 4.2 km around the Dead Sea in Jordan.

The next most notable movers were Austrian-based Strabag group (+7.24%) and German-based Bilfinger (+7.24%). 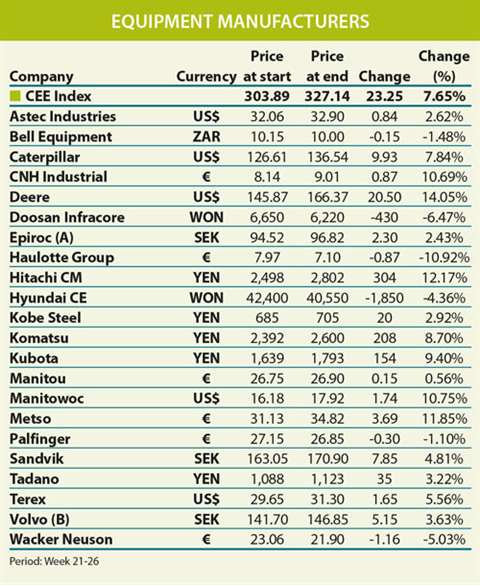 The best performing group during the six-week period was that of equipment manufacturers. The CEE Index figure grew by 7.65%, with 16 out of the 21 listed OEMs seeing a rise in share price.

The biggest mover for the OEMs was US-based John Deere, increasing by 14.05%. John Deere is such a broad company that many influential arms of its business could impact upon its share value. The company purchased the Wirtgen group in September making it an instant market leader in roadbuilding technology across Europe. It also announced in June that it is investing the lucrative business of E-sports, creating a ‘Farming Simulator League’. It’s not surprising that John Deere is making this move as companies like Epic Games have made billions from the gaming industry. Epic made a reported US$2 million (€1.79 million) a day after its Fortnite game app was released on software company Apple’s mobile platform during April 2018.

Japanese-based Hitachi CM was the second highest mover with a share price increase of 12.17%. This is good news for the company as in the last assessed period, weeks 16 to 20, the company had declined in share value by 13.2%. This month the company seems to have almost returned to the level it was at before the dip in value.

The third highest mover was Finnish-based Metso (+11.85%). The industrial equipment and services company signed an agreement to acquire McCloskey International, a mobile crushing and screening equipment manufacturer based in Canada during June. Metso agreed a bilateral loan from Nordea Bank to ensure the acquisition. The value of the transaction was approximately CAD 420 million (€285.6 million) with an additional profitability-based earn-out consideration of up to CAD 35 million (€23.8 million) for the two-year period after closing. Pekka Vauramo, Metso’s president and CEO, said, “This acquisition is in line with Metso’s profitable growth strategy. It strengthens our aggregates business in key growth areas. The different cycles of aggregates balance our previously more mining focused Minerals portfolio well”.

The biggest decreases in share price were seen by French-based Haulotte group (-10.92%) and German-based Wacker Neuson (-5.03%).

In the last period, the CE listed materials producers were the worst performing group in terms of share value – falling by 6.1%. During weeks 20 to 26 the CEM Index picked up a bit, rising by 1.12%.

The best performing producer was Schneider Electric, growing by 9.3% in share value. At the end of June, the company hosted a capital markets day for investors and financial analysts. During the event the company management highlighted the group’s strategy and execution priorities and pledged to focus on expanding its triple integration strategy. The integration strategy involves: Integration of Energy and Automation; Integration from end-point to the cloud (external servers) enabled by EcoStruxure; and Integrated software throughout the lifecycle. This move is expected to improve efficiency for customers.