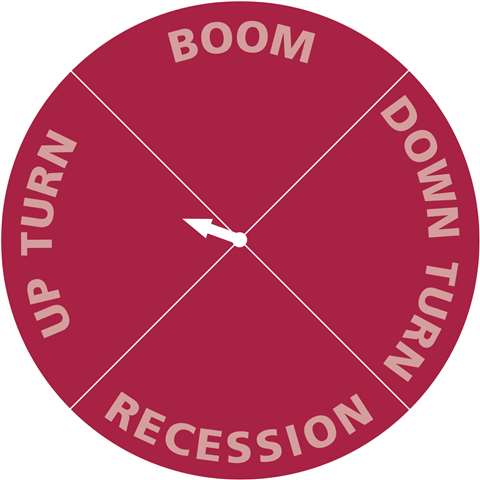 This month has brought about no change in optimism from the CE Barometer survey respondents, despite the majority sharing the opinion that the current climate is worse than it was a year ago.

Unlike last month, when there was a general agreement between respondents that activity was better this year than at this time last year, a balance figure of -5.3% suggests that most respondents are feeling the pinch.

Looking towards the future, respondents were yet again building on their optimism which last month showed a balance figure of 15.7% believing that activity would be better this time next year. This month a balance figure of 21.1% believed that there will be more activity in a year’s time.

Despite the current climate not showing any immediate signs of improvement, the general sentiment is that the industry will be in reasonable shape in the long term. The CE barometer clock shows an upturn for the future of the industry, but isn’t currently providing any short term indication regarding activity picking up again.

The last edition of Construction Europe was a combined two-month magazine which means that this month, CE has examined a larger 7-week period. This edition will focus on weeks 26 – 33 to determine the current market climate.

The CE-Total index figure this month has fallen from 3.08% growth in the last examined period, shrinking instead by 4.89%. This follows on from the period assessed during weeks 16 to 20 when the figure fell by 5.28% – resulting in a fall overall, between weeks 16 – 33.

Share prices in this period are falling generally, with a few exceptions in each category. In total, of the 65 listed companies 46 saw a decrease in share price while 19 saw growth – 14 of which grew by more than 1%. 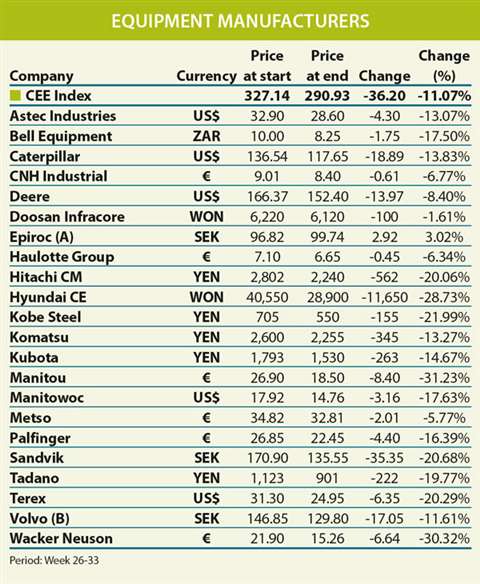 The equipment category has had its worst period all year, with all bar one OEM (original equipment manufacturer) experiencing a drop in share price.

Swedish multinational Epiroc saw its share price rise by 3.02%. The company posted its second quarter results for 2019 in July, reporting an increase in revenue of over 8%. The company said that its operating profit had increased by 25% and its operating margin was around 21.3%.

The biggest fall in share price, not just in equipment but across the board, was French OEM Manitou. The company saw its share price fall to its lowest point since December 2016, after experiencing a 31.23% decline in share value during the examined period.

The CEE index figure for this period hit its lowest point this year, falling by 11.07%. It’s perhaps worth mentioning that 16 of the listed equipment companies fell in value by more than 10%. 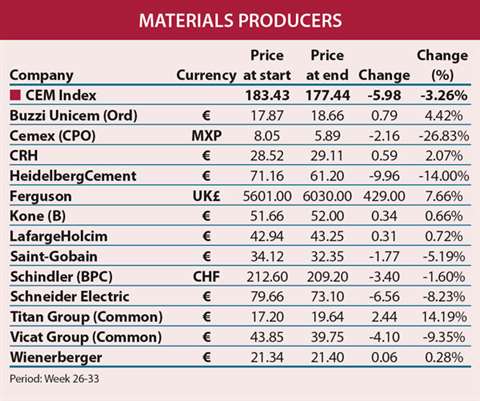 Most material producers saw growth during this period but were outweighed by the value lost by other firms when it came to measuring the CEM index figure, which experienced a drop of 3.26%.

The best performer in this category was Greek cement producer Titan group. The company’s share value rose by 14.19%, almost double that of the next best firm – Ferguson (7.66%) based in the UK territory of Jersey.

Seven material producers experienced a rise in share value during the period with notable growth from Italian cement producer Buzzi Unicem (4.42%) and Irish firm CRH (2.07%). This was not enough, however, to stay the impact created by the drop experienced by Mexican cement company Cemex – who seem to be on a one-way path downwards in value, falling by 26.83% – on the total index figure. 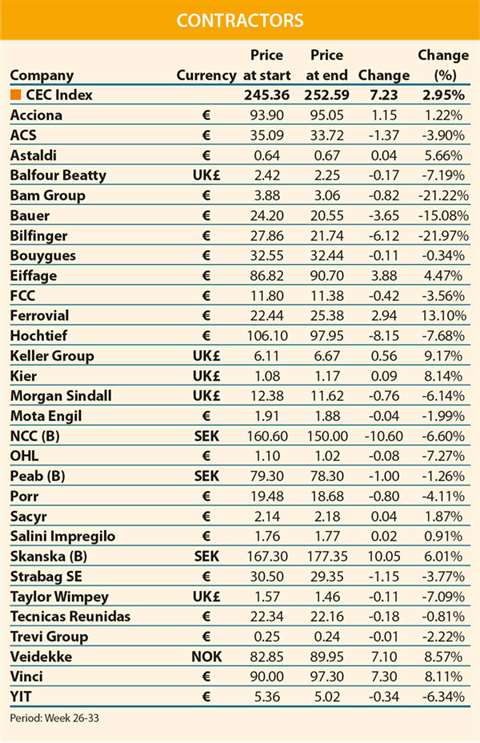 Moving onto contractors – the best performing sector during this period – only 11 of the 30 listed companies saw increases in share price, but it was enough to bring the group to an overall growth for the CEC index figure of 2.95%.

Spanish contractor Ferrovial saw its share price increase the most, moving up by 13.1% for the examined period. The company reported bringing in a revenue of €1.23 billion for the first quarter of 2019 – a 7.2% rise on the same period last year. Ferrovial intends to sell its service division, so the contractor’s revenue figure for 2018 omitted its contribution.

In terms of its continuing divisions, Ferrovial posted a revenue figure of €5.74 billion for 2018. The company’s construction order book was, as of May 2019, reported to be worth €11.29 billion – a new record for the company.

Important growth was also seen by the UK’s Keller group (9.17%) and fellow UK company Kier (8.14%). Kier recently suffered a sharp drop in its share value, which fell around 42.4%, after announcing that its full-year profits would be substantially lower than its previous forecasts, at around £129 million

Also announcing increased share prices, greater than 8%, were Norwegian company Veidekke (8.57%) and the company which features top of the year’s CE-100 league table for 2019, Vinci (8.11%).