Below the hook and under the hammer 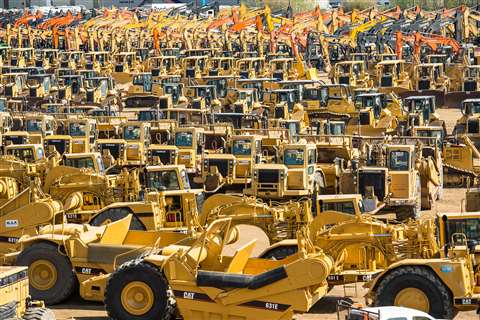 The growth in the used equipment market is not, on the face of it, good news for manufacturers – especially those that have been caught out by the swift onset of an economic downturn. Those companies who failed to heed the warning signs and quickly cut production, found themselves sitting on huge inventories of machines.

Meanwhile, as the used equipment market has grown, so it has become increasingly difficult for manufacturers to find buyers for their new models.

While there has always been a market for used construction equipment, that market tends to swell when budgets are tight – and they are tight.

Furthermore, the growth of electronic retail, via sites such as ebay and Amazon, has forever changed the global buying ethos. No longer do buyers believe they need to get hands-on with items before purchasing – and that’s as true for construction equipment as it is for handbags and sofas. 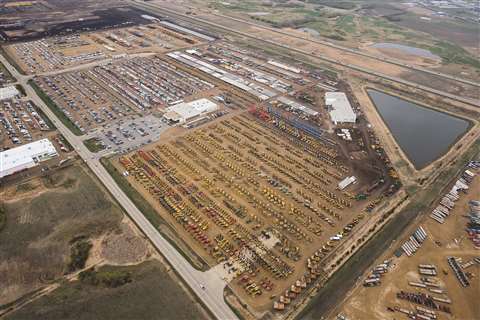 One of the beneficiaries of the growing popularity of online purchasing is IronPlanet. Founded in 1999, the online marketplace for construction equipment received early investment from the likes of Caterpillar and Volvo Construction Equipment.

Last year, with IronPlanet’s stature continuing to grow, the firm was acquired by the North American auction house Ritchie Bros, in a deal worth approximately US$ 758 million. Undoubtedly, the combination of Ritchie Bros and IronPlanet is a force to be reckoned with, as the collective sales of the two firms in the 12 months to June 2016, totalled over US$ 3 billion.

At the time, Ritchie Bros CEO, Ravi Saligram, said the deal was the next logical step in the company’s expansion, providing greater scale and choice for customers. He said, “Together with IronPlanet, we will create a combined company of trusted brands with the ability to provide customers around the world with a greater number of choices and platforms to sell, buy and list equipment when, where and how they want – whether onsite or online.”

He went on to say, “Our commitment to diversifying our offerings is directly in line with customer demand for multiple selling and buying solutions.”

While Saligram may have been referring to customers looking for a variety of equipment types, he could just as easily have been describing the variety of ways they now like to purchase their equipment – including used. 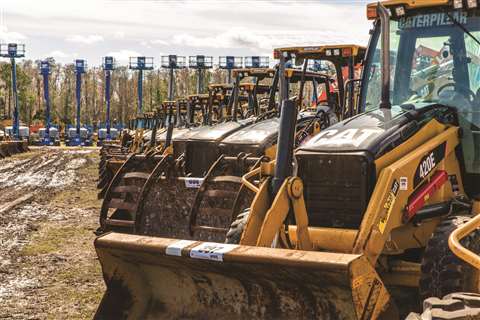 Gregory Owens, chairman and CEO of IronPlanet, said, “IronPlanet has built a leading online marketplace and technology platform across a number of verticals and, when combined with Ritchie Bros’ strength in live onsite auctions, it will prove to be a powerful combination in driving value for our customers.”

Going back in time, to when IronPlanet was looking for investment, we see that another winner in this deal is Caterpillar – one of the companies who, on the face of it, might be expected to suffer from the combined equipment sales of IronPlanet and Rithie Bros.

Yet, on completion of the IronPlanet acquisition, Ritchie Bros said it would also start an initial five-year strategic alliance with Cat, which would see it become the manufacturer’s preferred global partner for live onsite and online auctions.

The new deal provides Cat and its dealers with access to proprietary auction platforms, software and other services, enhancing the exchange of information and services between customers, dealers and suppliers.

When the agreement was first announced, Rob Charter, group president with responsibility for Caterpillar’s Customer and Dealer Support, said, “This alliance will ensure that more used equipment buyers have access to our best‐in‐class products, digital offerings and world class customer support through the Cat dealer network.”

To get an idea of the scope of IronPlanet, it recently announced that it had conducted a record-breaking number of annual inspections in 2016, with over 100,000 pieces of equipment evaluated and certified by its professional inspectors. 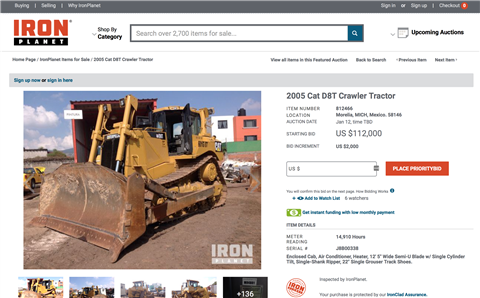 Within this system, known as IronClad Assurance, buyers know that one of the company’s inspectors has personally visited the item, taken pictures and conducted a comprehensive inspection of key systems and components. What the buyer sees in the inspection report is what they get when they receive the equipment.

IronClad Assurance allows buyers to purchase with confidence, knowing that the items have been given a full and detailed inspection by an industry expert. IronPlanet says its team of over 250 professional inspectors average more than 20 years of equipment experience and the firm’s chief marketing officer, Matt Ackley, says the team follows a standardised and consistent method of evaluation.

He says, “High quality, detailed and meticulous equipment inspections are a core component of IronPlanet offerings to buyers and sellers alike and that is what differentiates us from all other marketplaces.”

Ritchie Bros. currently holds more than 120 auctions in the US each year – but nothing compares to its annual five-day Orlando event each February. As we go to press, there are already well over 7,000 items consigned from 650-plus equipment owners, according to the company 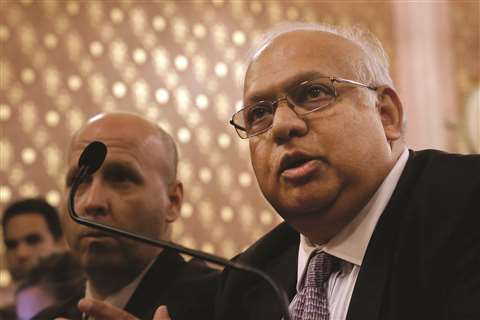 Ritchi Bros CEO Ravi Saligram: “Together with IronPlanet, we will create a combined company of trusted brands”

The auction will have equipment in every industry, with particularly large selections of gear for the construction, transportation and lifting industry. Thus far the sale will involve more than 520 excavators, 195 wheel loaders, 125 dozers, 355 truck tractors, 370 aerial work platforms and 95 cranes.

Jake Lawson, group senior vice president at Ritchie Bros, said, “The February Orlando auction is unique as it’s a melting pot of equipment from all across the United States and neighbouring countries. Many contractors hold onto their equipment for the chance to be a part of this massive auction. The equipment selection we will be offering is unmatched anywhere, which results in record bidder registration from around the world. Year after year we set new attendance records with this auction. In February 2016, we had more than 9,850 bidders from 79 countries.”

Another major player in international auctions is Euro Auctions. Established in 1998, the company has grown to be one of Europe’s leaders in unreserved auctions of construction industrial plant and construction equipment.

At the beginning of this year, the firm acquired a major US auction company, Yoder & Frey, adding half a dozen major auctions (and one permanent site) in the States to its portfolio (although they will continue to trade under the Yoder & Frey banner). 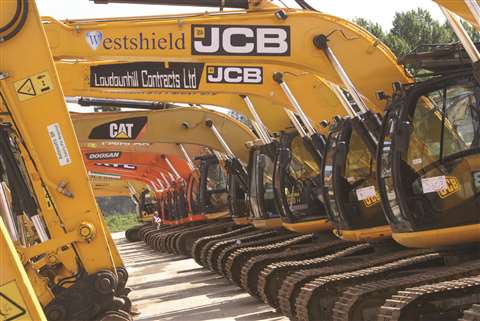 With another permanent site in Australia, the firm is becoming firmly established on the global auction stage.

Following the collapse of one of the UK’s leading construction equipment rental companies, Hewden, Euro Auctions are now set to hold what it claims will be the world’s largest crane auction in March.

The auction will be held at the Newark Showground near Nottingham in the UK, and the cranes element of the two-day public disposal auction will be held on the second day, when around 130 wheeled mobile telescopic cranes, ranging in capacity from 35 to 220 tonnes, will go under the hammer.

In total, more than 500 lots of general construction equipment, access platforms and other lots from Hewden will be shown.

Jonnie Keys, Euro Auctions operations manager, said, “This will be the single largest collection of used cranes ever assembled for sale in one place, anywhere in world.”

He added the auction was generating phenomenal interest around the world, as “all the cranes have been maintained in A-one condition and many have exceptionally low hours and come with some manufacturers’ warranty”. 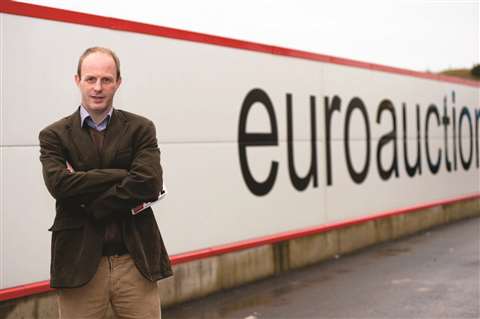 Jonnie Keys of Euro Auctions: “This will be the single largest collection of used cranes ever assembled for sale in one place”

On the flip side of this coin, a number of US-based sales professionals, dealing in used equipment, recently sat down with our sister title, American Cranes & Transport to discuss the trials and tribulations of operating in the second-hand cranes market.

Greg Steege, a partner at construction equipment dealership RTL Equipment, said, “Used rough terrains are pretty soft as are all terrains. With good, late-model crawlers there is activity, especially if you are willing to do a rental with a [rental] purchase option. The used truck crane market is active with the activity coming pretty much all over the US. It is a business that is not for the faint of heart and if you get into too much used [machinery] at the wrong numbers, it can really jeopardize a company.”

“We see all terrain cranes from Europe that are in very good to excellent condition selling for much less than what is on the market in North America. It is definitely time in our opinion to focus on crane and equipment rental and try to ride out the storm, so to speak.” 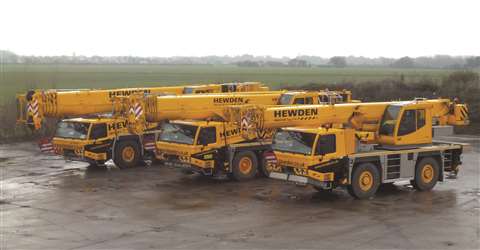 Wood concludes, “If you have needs for cranes we would likely recommend considering trade-in capabilities, lease to purchase and other non-conventional methods to protect your investments. New equipment pricing could only go down and is in this market trend. The strong get stronger, and the weak get weaker. This old adage will prevail in this market. Larger companies will recognise the patterns and acquire equipment

and companies to add to their ever-growing fleets. New equipment sales could only go down as well, including the pricing. The manufacturers are wise [about] the market and will create incentive plans to take new equipment and continue to harm the used crane sales marketplace through these programmes.”

The CE100 list of European contractors
Construction Europe presents its ranking of the top 100 construction companies in Europe, by revenue