Bauer Maschinen has completed the testing on its first fully electric foundation drilling rig, the eBG 33. 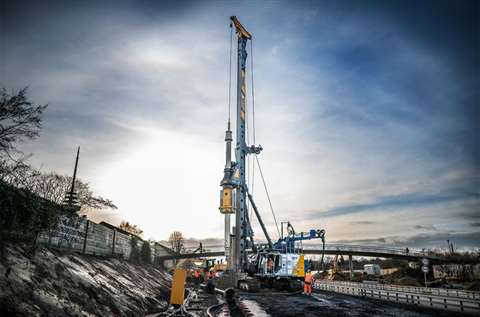 The company said the prototype machine completed piling operations on a test site in Münster, Germany, drilling piles of 1200mm to a depth of 16m.

Bauer reported noise reduction of up to 50%, compared with its diesel-powered counterpart, as well as fuel savings equivalent to 400 litres of diesel, after eight hours of operation.

Operating in the range of 280 to 390kNm of torque, the rig is capable of tackling a range of applications, including Kelly drilling, cutter soil mixing processes, double-head drilling and even diaphragm wall milling.

Christian Heinecker, head of the drilling rigs business unit at Bauer, said, “Our analyses have shown that...operating costs can be massively reduced with a longer use of the eBG, compared to a diesel-powered drilling rig.”

The rig is powered via a direct power supply, as opposed to battery power. Bauer says an available battery system could not provide the required power for a rig in this size class.

The first electric rig has been presented with a drag cable, which, according to Bauer, makes it particularly suitable for soil mixing processes during which the rig will remain relatively static.

Heinecker said, “Overall, cable routing will still bring some challenges, because there are different requirements in every project, and the possible solutions will be correspondingly diverse.”

The current solution is a so-called power loop – a thick hose with a solid protective jacket inside of which a total of seven cables run.

According to Heinecker, the customer reduces general operating costs through the “highly efficient electric drive,”

He explained that the entire carbon footprint of a building is positively influenced – by the CO2-optimised electric drive, but also through the possible choice of CO2-optimised construction processes.

The electric rig is set to be deployed this year, on a jobsite on the UK’s HS2 high-speed rail network.