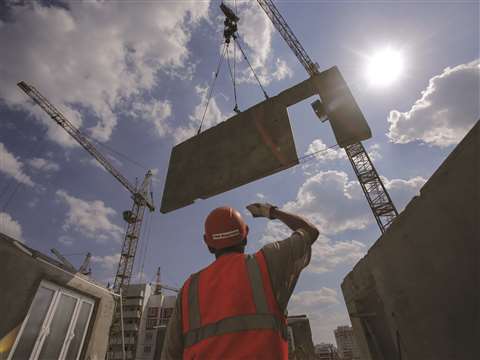 Russian-made cranes, with comparable quality to new machines, now cost the same as used foreign cranes which are five to seven years old

At the end of May, Russia’s largest construction equipment show will open its doors – but who will walk through them? The construction market in Russia has contracted once again this year, and the best anyone is hoping for in 2017, is a flat market.

Fortunately for the organisers, international construction firms have to plan for the long-term these days, and a good number of major European firms will be in attendance (largely German and Italian).

In the short term, the situation is certainly looking bleak; the economy continued to contract through the first half of 2016, but the pace slowed as oil prices and the ruble have both regained some lost ground, and the economy has adapted somewhat to new conditions. Still, it remains premature to expect the Russian economy to improve significantly, although the magnitude of year-on-year downturns has diminished.

Roman Radivilov, deputy general director at Crane Plant, said, “Products costing at least RUB10 million [$154,000], where the cost of components and raw materials is RUB6 million [$ 92,000] are impossible to produce for stock. Production at our plant is very similar to that of imported cranes, since we are using more foreign than domestic components. Of Russian origin is only the steel, hardware and cables; in other words, the structural steel metalwork. Electrical, drives and other equipment is 80 % imported.” 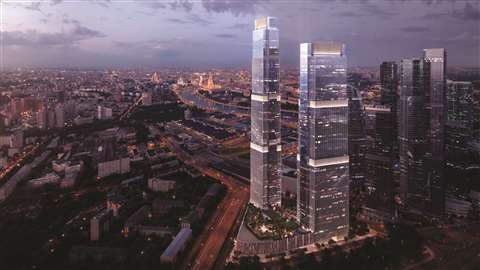 At 338 m, the 77-storey residential tower of the Neva Towers project will host more than 800 luxury residences

Commenting on the market situation, Radivilov suggested that between 2011 and 2013 the market was growing by nearly 20 % a year but it collapsed with the fall in the exchange rate of the Russian ruble. Market players believe that this gives them good opportunities for development. The result is that imported equipment is now nearly 50 % more expensive to buy than Russian cranes. According to Radivilov, Russian-made cranes, with comparable quality to new machines, now cost the same as used foreign cranes which are five to seven years old.

That’s not to say there are no major projects underway in the country – there are many, especially in Moscow, which will want to put its best foot forward when the world watches the Fifa World Cup of football in 2018. Real estate investment company Renaissance Development is currently tackling one of the highest-profile projects in the country’s capital, with Neva Towers.

The mixed-use project, located in the heart of Moscow’s central business district, includes a 77-storey 338 m residential tower, incorporating more than 800 luxury residences, as well as sports and entertainment units. At 289 m, the 61-storey neighbouring structure will primarily host office units, with a four-storey parking and retail structure completing the project. 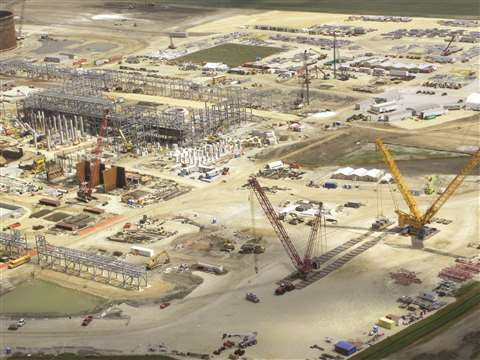 With an estimated total cost of $12 billion, the contractor on the Neva Tower’s project is Renaissance Development’s sister organisation Renaissance Construction.

Many significant – although less glamorous – construction projects are being undertaken by overseas contractors. A consortium led by Hyundai Engineering, for example, recently won a KRW 5.6 trillion ($5.16 billion) contract to build fertilizer plants in Kozmino on Russia’s east coast, close to the country’s borders with China and North Korea.

The deal was signed following a meeting of the Korean president Park Geun-hye and her Russian counterpart Vladimir Putin in Vladivostok.

The consortium, which was selected as a preferred bidder for the plants in September 2014, was awarded the contract by Russia’s Nakhodka Mineral Fertilizers Factory, a subsidiary of the National Chemical Group.

The construction of the plants is set to be completed in 62 months. 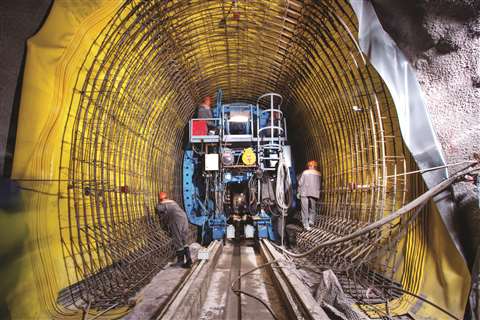 Top of the form

The Russian engineering company Stalform, a leading developer of formwork systems, is currently operating at some of the biggest construction projects in the country – notably the revamped 78,000-capacity Luzhniki stadium in Moscow, set to stage the World Cup final in 2018.

Stalform is also at work on two huge civil engineering projects, the first being the two-deck bridge spanning the Morskoi Canal in St Petersurg, which is currently under construction by a consortium of Italian firm Astaldi and the Turkish company Ictas.

The unique structure will contain two four-lane highways, with the upper and lower levels moving in opposite directions.

For the bridge piers, which will reach heights of up to 52m and hold cap ends of complex configuration, Stalform has designed and manufactured a bespoke all-metal panel casting.

Stalform is also operating at the Rokski Tunnel, which will connect South Ossetia with Russia. The service tunnel runs parallel to the main track and will be used to accommodate the life-support systems and evacuation in case of fire or other emergencies.

The construction firm heading up the tunnel project, BPS-Gidrostroy is charged with concreting the permanent lining on the vault and walls of the gallery – in an earthquake-prone region and in difficult mountainous terrain, at over 2,000 m above sea level. To do this, self-propelled formwork systems, designed and manufactured by Stalform, are being used. 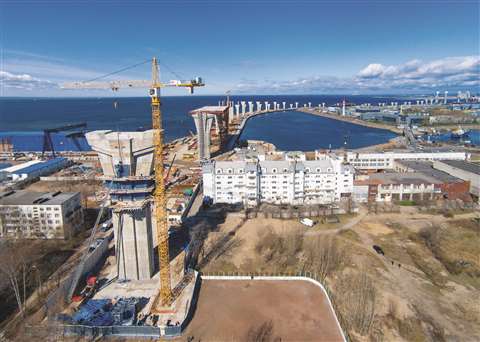 Stalform formwork on one of the 52m-high piers at the Moskoi Canal bridge in St Petersburg, Russia

The economic picture in Uzbekistan is brighter, with GDP having risen an average 8.1% a year, between 2011 and 2015. Over the past decade, the construction industry has been one of the major drivers of economic growth, with output rising by an average 16.3% a year, up to 2015.

Strong growth in the construction industry in Uzbekistan has provided decisive support for domestic production of building materials, cement being a case in point.

One of a number of mega projects underway in the country is the Kandym gas processing plant, which Hyundai Engineering started to build in April 2016.

The plant is being built in the Kandym gas field, some 500 km southwest of the capital, Tashkent. Once completed, the $2.66 billion plant is expected to have an annual production capacity of 8.2 billion m3 of natural gas.

Hyundai Engineering won the contract to build the plant Kandym plant in 2014, and, based on its successful tender for a second plant in the same region back in 2011; that plant, with a construction value of around $420 million, is now at the final stage of construction. 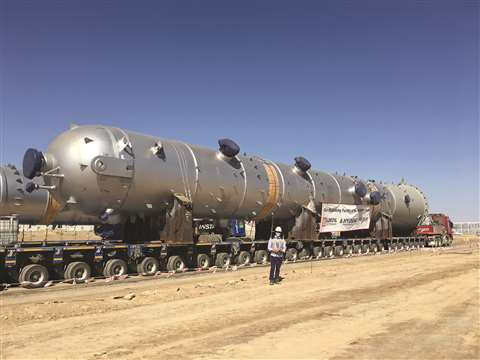 Towards the end of last year, Tengizchevroil (TCO), a consortium led by Chevron, began construction work on a $37 billion project at the Tengiz oil field in western Kazakhstan.

Already accounting for around one third of oil production in the country, the expansion work at the site – known as the Future Growth Project – is expected to boost production from its current 590,000 barrels per day (bpd) to 850,000 bpd by 2022.

TCO’s general manager for government and public relations, Rzabek Artygaliyev, said, “This is a grandiose project. The area under construction will be 1.2 km wide and 1.5 km long.”

The foundations of the project have required the delivery of 23,000 pilings, and, as the pilings are hammered into the ground, a new workers’ village (Orken) is being built to house 5,000 people, complete with housing, dining options, cinemas, swimming pools and other sport and leisure facilities.

The significance of this project cannot be overstated – and not just within the oil and construction industries; when the consortium (which includes ExxonMobil, Lukoil and KazMunayGas) took on the FGP build, it sent a clear message that Kazakhstan was open for international business.

As Kazakhstan’s energy minister, Kanat Bozumbayev, said, “This decision made by major international companies reaffirms that the Republic of Kazakhstan is a country with favourable business climate where long-term investments can be made with confidence.”

And the opportunity was not lost on international heavy transport and lifting specialist Sarens, who gave Kamag (Tii Group) its largest ever order, when it requested self-propelled modular vehicles for a total of $67 million.

At the construction site, Sarens has been contracted to off-load, store, stack, and transport the modules to their respective installation points. The scale of the project is huge which is reflected in the wide range of technical challenges. Wim Sarens, Sarens CEO, said, “We have invested €34 million [$35.9 million] in advance in the purchase of new equipment just to submit a tender for the project. We were sure that our project expertise and commitment would get us the job – and were proven right. The technical requirements for the equipment are extremely ambitious which is why we saw the Tii Group as the only possible strong partner, due to its history of developing and manufacturing self-propelled vehicles.”

Not to be left out of the mega project equation, Tajikistan has set in motion the construction work on what is set to be the world’s tallest dam.

The country’s president, Emomali Rahmon, was at the inauguration event, which saw Italian construction firm Salini Impregilo commence the diversion work on the Vahksh River. Once the river has been rerouted, Salini will begin the foundation work on the 335 m Rogun dam.

Claudio Lautizi, General Manager International Operations for Salini Impregilo, said, “The diversion of the Vakhsh River was done by directing it towards tunnels on the left side of the mountain to have its waters flow into them, facilitating efforts to dry the area where the dam’s foundations will be built.”

While the dam has been a major source of political conflict between Tajikistan and its downstream neighbour, Uzbekistan, the Tajik government insists the project has been undertaken in response to a global shift towards a green economy, based on the use of renewable energy. It claims the hydropower plant, once in commission, will allow for the reduction in hundreds of thousands of tonnes of CO2 emissions.

When completed, the US$ 3.9 billion Rogun facility will deliver 3.6 GW of power annually. Although phase one completion is not anticipated until April 2019, the first of its six turbines is expected to be producing electricity by the end of 2018.

All six turbines at Rogun are expected to be online by 2026, by which time more than 61 million m3 of material will have been used in the plant’s creation.