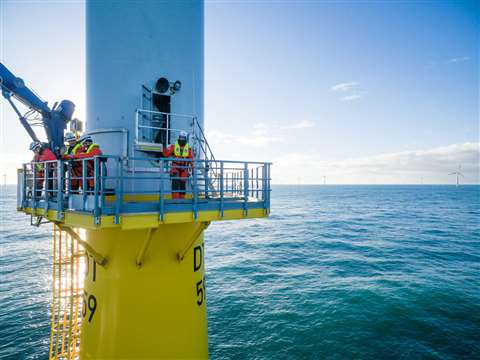 Workers on a Vattenfall wind farm in the North Sea

Plans for the world’s largest offshore wind farm have been released by the project’s developer, Vattenfall.

The Swedish government-owned power company, which made its final investment decision on the Hollandse Kust Zuid Wind Farm in June, will start construction work next spring, with first power anticipated by the end of 2022 or early in 2023.

Mapping of the seabed within the wind farm zone - to ensure the most efficient positioning of the foundations - is ongoing and sweeps are also being made to ensure there is no unexploded ordnance in the vicinity.

Construction of an operations and maintenance facility is expected to start early next year, in Amsterdam’s Port of Ijmuiden, with a second temporary support base set to be built simultaneously by Vattenfall.

Next spring, the Luxembourgish engineering firm Subsea 7 will ship the first of 140 turbine foundations from the Port of Rotterdam to the site, and is also charged with installing them.

The first of the 140 Siemens Gamesa 11MW wind turbines are due to be delivered and installed during 2022.

When fully commissioned, the four Hollandse Kust Zuid wind farms combined will produce 1.5GW of power, primarily to the Netherlands, but also for international use.

Vattenfall says the renewable electricity output from the wind farm will be equivalent to the annual consumption of over two million Dutch households.