Developed as a way of reducing the blight of hand arm vibration syndrome, pile cropping has become a focus for driving technical innovation in the Netherlands and the UK. Lucy Barnard speaks to one manufacturer and hire firm now attempting to sell the concept to a global audience.

Simon Price, managing director of National Pile Croppers, hails from the local area and has based his business in Swadlincote, once the very centre of the South Derbyshire coalfield.

“You can see it quite a lot, especially in this area of the country, usually among men who have spent years working down the pits,” he says. “It starts with tingling in the hands and numbness. Sometimes the fingers turn white. If you get it badly it can be extremely painful and leave you disabled.”

Piling in Vancouver - courtesy of Mike W. via Flickr https://creativecommons.org/licenses/by-sa/2.0/legalcode

Price’s company National Pile Croppers is one of a small number of specialist firms which have sprung up in the wake of global demand to come up with innovative ways to efficiently crop piles and at the same time prevent HAVS in the construction industry, around the world.

HAVS in construction
Pole cropping is one construction task that carries the risk of developing HAVS. Contractors saw through the concrete casing around rebar piling in the foundations of buildings, leaving the steel bars protruding to the right length so that they can then be incorporated into the new structure.

Traditionally this sort of work was done using jackhammers, leaving workers at risk of developing vibration injury and exposed to high levels of noise and prompting governments to restrict the use of concrete breakers to shifts of just 20 minutes a day. 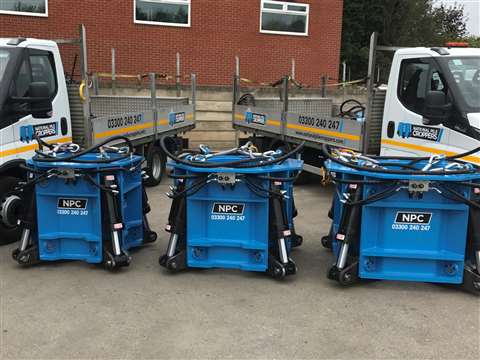 “Twenty years ago, this sort of work was done with a vibrating chisel,” says Price. “You would see two or three guys standing in a trench chiselling away. And it would take them anything between half an hour and four hours to break down a pile.”

Instead, pile cropping has become a focus for driving technical innovation within construction with manufacturers and hire firms being established to meet the growing need from contractors. Since then they have been manufactured around the world by a small but growing number of equipment manufacturers.

When were croppers first developed?
The first types of croppers were developed in the Netherlands in the 1970s and 1980s as Dutch engineers sinking piles into land reclamation projects sought labour saving ways to crop.

These days, the European Federation of Foundation Contractors, which represents more than 370 piling and ground improvement companies across Europe, lists three main types of pile cropping methods used by its members: pile cropping machines; high pressure water jets; and integrated pile breaking methods where foam or chemicals are inserted into the pile in order to break it.

“With pile cropping the key thing is to maintain the integrity of what’s in the ground,” says Price, who founded National Pile Croppers afer spending 15 years at pile cropping specialist Mr Cropper which has since become part of specialist hire firm VP’s portfolio. “If you damage a pile in the process of cropping it, it can be expensive and time consuming. You then have to drive two piles into the ground either side of the damaged pile and the whole integrity of the foundation is put at risk.”

Hydraulic pile cropping machines can connect to excavators weighing between six and 21 tonnes. The excavator lifts the pile cropper over the pile, allowing the machine to cut away at the pile in a horizontal direction up to the rebar. The concrete then breaks into pieces and can easily be lifted off the pile with the whole process lasting around 5-10 minutes.

“Pile croppers are a specialist piece of equipment,” says Price. “It’s not like a hiring a power drill or a common piece of kit. They are only used for one specific type of task so it makes sense for many of our customers to only hire them when they need them. As a firm this is our specialism. We can offer 20 years of foundation engineering and pile cropping experience which mainstream hire companies can’t offer.”

And, with architects designing more and more complex building projects around the world, all of which will need piling, demand for pile croppers is increasing steadily. 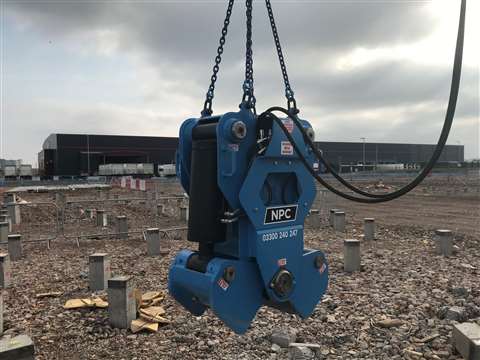 “The pile cropper market is growing almost daily,” says Price. “There is more construction on brownfield sites and in town centres, more high-rise building, more building in harsh environments. We are getting calls from contractors all around the world enquiring about our services.

“There are different types of piling around the world so we get them to send us an architect’s drawing of the piles to be cropped and then we can advise clients about the best machinery to use. We can design and build bespoke machines where the pile formation requires it.”

And, Price says, the key to growing the company’s market further is demonstrate how using pile croppers around the world can save contractors time and money.

“For us educating clients is a major part of the sales process,” says Price. “We’re talking to clients in the US and Canada and introducing this technology to many of them for the very first time. We need to stand up and give the world the knowledge of how to do the job safely, efficiently and effectively.”

What is HAVS?
HAVS hit the headlines in the UK in the 1990s when tens of thousands of former coal miners were awarded industrial compensation by the UK government after developing the condition caused by working with vibrating tools.

Over the years, construction workers have been hit hard by the condition. In 2018 UK-based contractor Balfour Beatty was fined after the High Court found that its workers were exposed to HAVS between 2002 and 2011 while operating handheld power tools such as hydraulic breakers and floor saws.
Safety & training Construction Rental