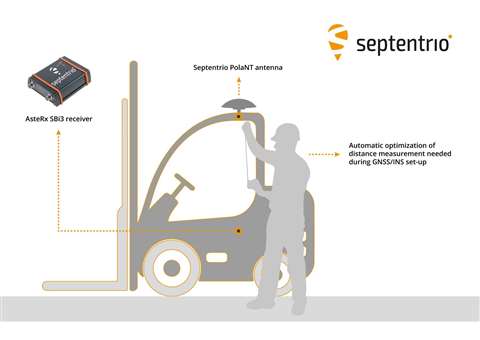 Septentrio has upgraded its RxTools software package with a new function, to help construction equipment owners and users set up their GNSS (global navigation and satellite system) receiver kits.

The receivers, which monitor the machine’s position and orientation – including heading, pitch and roll angles – provide accurate information for machine control.

RxLevelArm helps to make setting up the GPS/GNSS receiver easier, by automatically calibrating and validating the distance between the INS sensor and the antenna on the machine.

“For lever arm compensation, users now only need to measure the rough distance between the IMU (Inertial Measurement Unit) and the main GNSS antenna reference points on the vehicle,” said the company.

“Data is then logged under open-sky conditions, which allows RxLeverArm tool to optimise the initial rough distance measurement and prevent common errors such as sign inversion.”

According to Septentrio, as well as improving accuracy, this means that users no longer have to measure the distance by using other “complex instruments” and can start testing the equipment just minutes after the receiver is installed.

Danilo Sabbatini, product manager at Septentrio, said, “The RxLeverArm tool in combination with the intuitive Web User Interface, as well as the support material available in our Knowledge Base, enables customers to start testing within minutes after the physical installation of their receiver.”