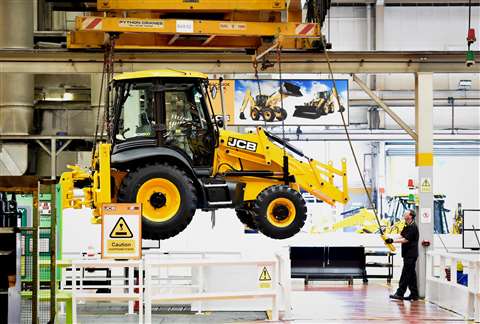 A JCB backhoe loader coming off the production line

UK-based JCB remained profitable in 2020 despite the severe impact of the Covid-19 pandemic on its global manufacturing operations, and the company is increasing production to levels not seen before to try and meet up with demand.

“In March 2020, £1 billion worth of orders disappeared overnight with the onset of Covid-19 and JCB was forced to close its 21 manufacturing plants around the world for around two months. Despite the severe impact on its business, JCB remained profitable in 2020 as it has done for the past 76 years,” said JCB CEO Graeme Macdonald.

“The turnaround in 2021 has been dramatic: we are sitting here now in September with four times the usual order bank we had in normal times two to three years ago. As a result, we are ramping up production to levels we have not had before. I have never seen anything like it in my career.”

The OEM – which recently launched its first Stage V reduced swing model in the growing X-Series crawler excavator line-up – has been investing in alternative fuel sources such as hydrogen.