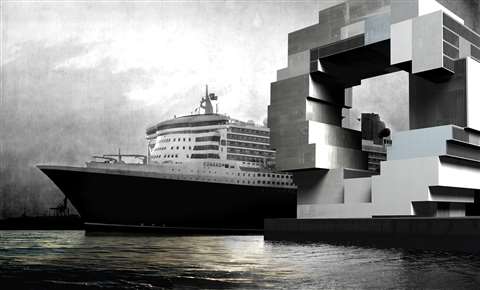 Office for Metropolitan Architecture (OMA) has revealed the final design for a Science Centre and Aquarium for Hamburg.

Netherlands-based Office for Metropolitan Architecture (OMA) has revealed the final design for a Science Centre and Aquarium for Hamburg, Germany’s Hafencity complex.

The 23000 m2 complex will comprise a Science Centre, aquarium, theatre, offices, laboratories and commercial and retail facilities. It will be located at the eastern edge of Hafencity, Hamburg’s ambitious harbour redevelopment.

The Science Centre will be is constructed of ten modular blocks that connect to form a ring shaped building. The concept allows for “maximum flexibility” for exhibitions, according to an OMA spokesman.

Visitors will start their visit at the “base station” just under the top of the building, cross over through the exhibition halls and descend the modular blocks through the various exhibited scientific subjects, such as “the beginning of life” or “everything flows”.

About 8500 m2 of the building is located underground, with a large part of this space being taken up by the aquarium, providing a zoological tour from Hamburg to the Red Sea.

Terraces on various levels will provide panoramic views of Hamburg’s city centre as well as to the West and East sides of the Magdeburg harbour.

Rentable office and laboratory spaces mean the building will act as a hub for various scientific institutions in Hamburg. Commenting on this aspect of the complex, Cultural Senator of Hamburg Professor Dr. Karin von Welck said, “The new Science Centre will be established as an interdisciplinary meeting place for HafenCity Hamburg, an innovative space for art, culture and science.”

The project is lead by OMA Partners Rem Koolhaas and Ellen van Loon with Marc Paulin as project architect.

Strabag in for Romanian motorway
Construction group to take on 19km-long route in €111 million agreement
Loading...