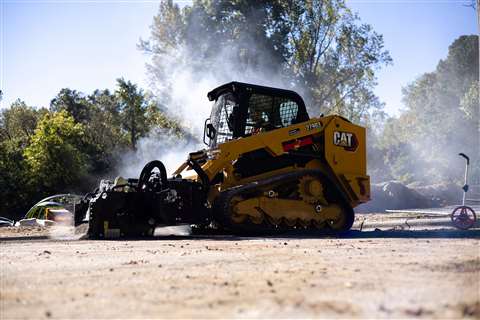 Smart creep will be available in the third quarter of 2022.

“Smart creep senses the load on the attachment and automatically adjusts the drive command to keep the cold planer or wheel saw running at the most productive speed,” the OEM confirmed in a statement.

“By continually sensing the load on the attachment, smart creep increases machine speed when encountering less resistance and automatically slows the machine when encountering higher load. Engine load remains constant, while the operator can monitor hydraulic pressure on the in-cab display panel.”

“Without the aid of this feature, setting creep speed too fast can lead to stalling the attachment, and too slow of speed results in productivity loss. Smart creep software smoothly and efficiently determines the optimal machine speed for cutting conditions.”

To use the feature, the operator activates the standard creep control system and sets the maximum creep speed on a display inside the cab. Once the tool engages the cut, smart creep measures load on the attachment and adjusts the drive command automatically as cutting begins.

In the event of the cutter jamming or stalling, an auto reverse feature within smart creep quickly changes machine direction to allow the tool to clear the jam.

Smart creep on Cat D3 SSL and CTL machines will be available in the third quarter of 2022. A field installation kit consisting of sensors and machine software for operating the new feature will be made available for existing fleet loaders and attachments.

Once commercially available, new cold planer and wheel saw purchases will be shipped from the factory with the required hardware installed, and new D3 SSL and CTL models will come smart creep ready from the factory.