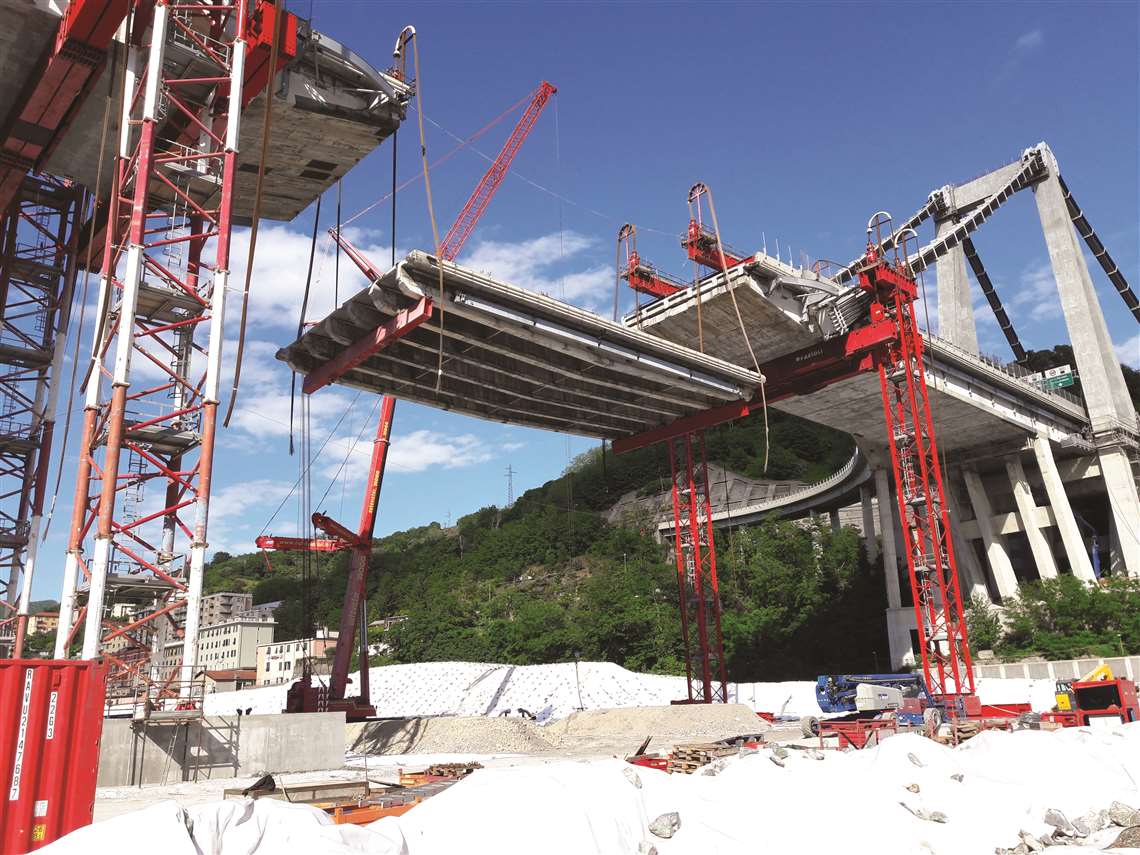 In August, 2018, disaster struck the city of Genoa, when a 200m section of the renowned Morandi bridge collapsed, including one of its three supporting towers. The incident killed 43 people and left a further 600 homeless.

With the city in great distress, local authorities took decisive action; they commissioned designs for a new bridge and instigated a plan for the demolition and clearance of the Morandi bridge. At the same time, calls were made to the country’s leading construction firms to prepare for the construction of the new structure.

The Genova San Giorgio bridge would be built as a mixed steel-concrete structure, 1,067 metres in length, with 19 spans supported by 18 elliptical reinforced concrete stacks.

Suddenly, the mood shifted from one of mourning to one of hope, as the Italian construction industry mobilised itself to assist in the huge project.

One of the companies that offered its services to the movement was Fagioli.

He said, “When the bridge collapsed, I was on holiday with my family. I received the dramatic news on the phone, through an automatic alert, that a bridge on the A10 highway collapsed. No more details. Right away I had a bad feeling, then the news confirmed that that Morandi bridge had collapsed with huge casualties.

“I remained astonished for a long time. The main bridge in Genoa, my city, the bridge which is the same age as me and which I crossed many times in my life. Then after some hours, I started to react. I had to help, to move. Therefore, the same afternoon, I wrote to the highway company, telling them Fagioli was at their disposal for any need.”

Fagioli began to study the original project documentation and define potential methods of dismantling the bridge structures. it was clear that the structure could not be recovered and refurbished due to the huge shock suffered by its structures and their age.

“We contacted other companies to form a proper team, with demolition [Omini], concrete structure engineering [IPE progetti] and environment treatment [Ireos] capabilities to face the bridge dismantling and demolition. We also started to talk with construction companies [Salini Impregilo [now Webuild], Italferr and Fincantieri] to work with for the reconstruction.” 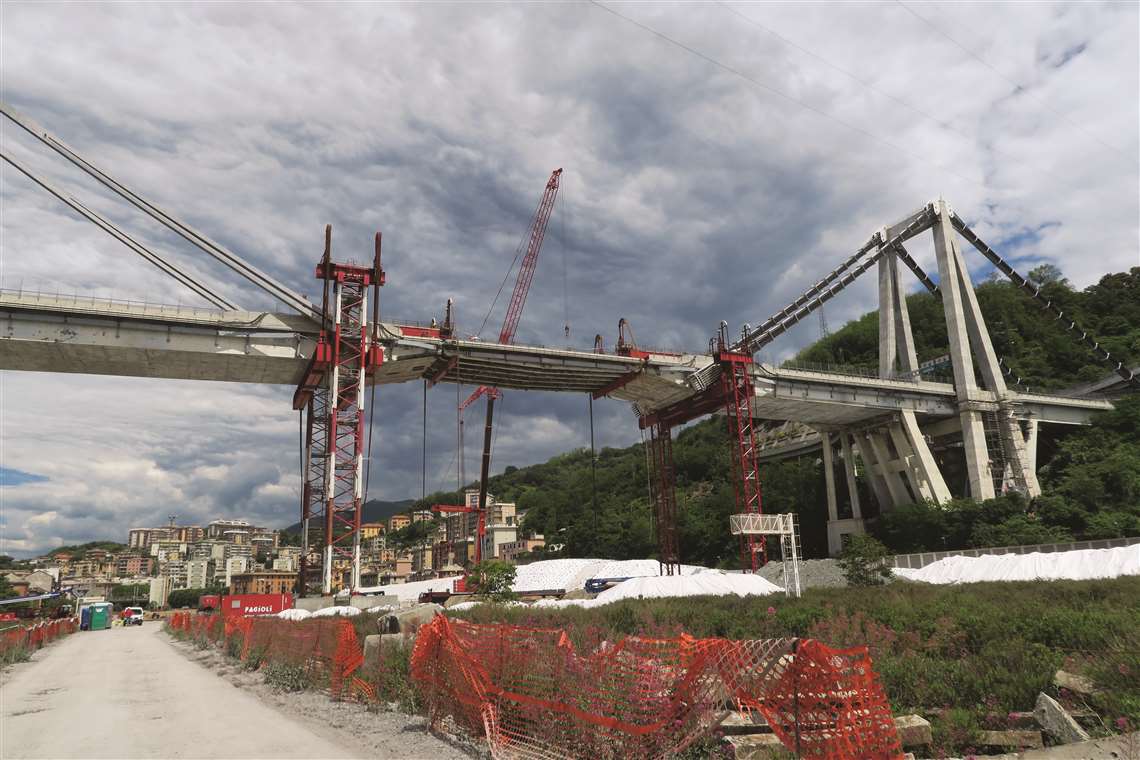 Fagioli’s fleet of SPMTs, mobile cranes and strand jacks was used to move and install elements of the new San Giorgio bridge in Genoa

It was clear to Cremonini from the beginning that the bridge project would be extremely complex, especially given the tight deadlines the involved companies were asked to work to. “Every day without the bridge,” he said, “worsened the situation, with losses for both the city and the country’s economy”.

Fortunately, the complexity of the project was something he was prepared for, having managed his company’s role in the salvage project of the Costa Concordia cruise ship, which was wrecked in 2012.

“The two projects,” he said, “have many common characteristics: both originated from a tragedy with lots of casualties; the main point of the project was to manage existing structures after a huge shock, where actual conditions and the static situation – such as internal forces, plastic and elastic deformations, etc – were not known; time was a key factor to solve the problem; no previous reference experience were available to guide us; and, last but not least, the constant presence and attention of worldwide media accompanied us through the duration of the project and after.”

As it turned out, Fagioli had a role in every aspect of the Genoa bridge project.

Cremonini said, “For the dismantling and demolition of the Morandi Bridge an operating JV was formed among Omini, Fagioli, IPE progetti and Ireos, and we as Fagioli took care of the engineering and execution of all transport, lifting and logistic operations for the dismantling of the existing bridge – lowering and moving components with dimensions of up to 50m in length and 30m wide and weighing up to 1,000 tonnes – with the use of our large fleet of SPMTs, our huge mobile cranes and our strand jacking system.

“For the construction of the new Genova San Giorgio Bridge we engineered and executed the transport (by sea and land) from factory to site, of all the steel bridge deck sections, and lifted them into position on top of the concrete bridge pillars…moving and lifting components with dimensions of up to 100m in length and 35m wide, weighing up to 2,200 tonnes.”

As well as being the highway connecting the city of Genoa to the western part of the region of Liguria, the A10, which ran over the Morandi bridge, played a major role in connecting Italy and south-eastern Europe to France and the rest of Western Europe.

The economic effects of the dramatic collapse of the bridge could not be overestimated and the timeframe imperative was made clear to all companies involved in the bridge project.

According to Cremonini, “The dismantling and demolition of the existing Morandi bridge and the construction of the new Genova San Giorgio Bridge, was based on safe fast solutions, to be executed in parallel but on different fronts, multiplying the resources in order to save time.

“The three strategic points for the safe and efficient execution of the project were the immediate response of Fagioli engineering, based on our deep experience, the large available Fagioli equipment fleet and the full commitment of the Fagioli project team, which worked in shifts, continuing for 24 hours a day, seven days a week, for 20 months.”

Cremonini described the logistical challenges of such a project, taking place in a busy port city. He said, “The bridge crosses the Polcevera River valley, one of the most congested areas of Genoa. The western part of the valley is one the most important industrial area in Genoa, while the east is a highly populated area, with civil buildings.

“The bridge runs above four public roads and two railways, all intensively used day and night, which represent the strategic connection of Genoa with the northern part of Italy and Europe. It was clear that the available areas at ground level for transport, logistics, construction and erection activities were dramatically limited.

“Due to the restricted extension of the available areas at ground level, it was necessary to design methods and operations down to the smallest details in order to mitigate site congestion and avoid the overlapping of activities, both from a safety and production point of view.”

In fact, Cremonini said, “The project’s logistical execution was the key factor in the successful construction of the new bridge. The bridge sections were fabricated in South Italy, thousands of kilometres from Genoa, due to the availability of fabrication facilities.

“Bridge sections had to be transported by sea on ocean-going barges. We studied special transport configurations in order to be able to transfer bridge sections stacked on three levels to save space on barge decks, reduce number of sea voyages and reduce project schedule. We identified an available quay in Genoa to execute the load in by SPMTs of the stacked sections, under special local permits, due to the emergency characteristics of the project.

“But the most critical logistical issue was to identify available road paths in the city to be able to feed the site areas with the bridge sections by road transport convoys, without having to modify sections’ dimensions or modify road characteristics.

“Hundreds of bridge sections with plan dimensions of 15m by 11m and some hundreds tonnes of weight each, were successfully transported in the city, with groups of convoys per night to minimise the impact on city life. All this along the typical narrow roads of Genoa, with just a few cm of clearance between sections and houses where people were living.”

Cremonini says that, along with the Costa Concordia wreck removal project, his experience of working on the Genoa bridge will stay with him forever.

He said, “I have two project executions in my life that I will always remember and that I am honoured to be part of: The Costa Concordia Wreck Removal and the Ponte Morandi Dismantling/Ponte Genova San Giorgio construction. Both unfortunately happened in Italy, with great impact on the country’s image worldwide. This is why we as Fagioli did our best to solve both problems, to support our nation and make our contribution to show the world how Italians can do supreme things, never done before.”