‘Solid’ first half for Deutz 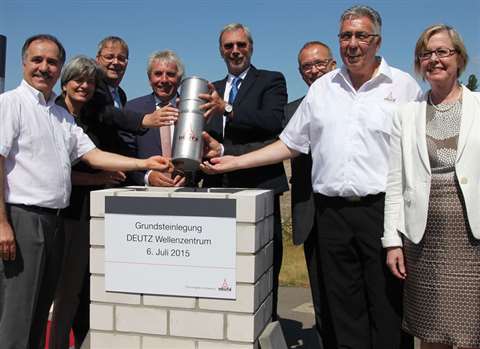 Among the people marking the laying of the foundation stone at the new Deutz site were Jürgen Roters, Mayor of Cologne (fourth from the left); and then, left to right, Helmut Leube, chairman of the De

Engine manufacturer Deutz has reported a solid first half which was in line with its expectations, although unit sales and revenue were down year-on-year as a result of advance production of engines.

It said that despite this, its operating profit was level with the first half of 2014.

Deutz said revenue was in line with forecasts, falling by 11% year-on-year to €670.2 million, compared with €753.4 million in the first half of 2014. It claimed the decline could be attributed to the changes in emissions standards for engines under 130kW that came into force in the European Union on 1 October, 2014, and to the resulting effects from the advance production of engines.

The Americas and Asia-Pacific regions achieved revenue growth, whereas the EMEA (Europe, Middle East and Africa) region saw a decline. In the second quarter of 2015, revenue stood at €352.1 million, which was a 10.7% increase on the previous quarter but a 14.3% decrease on the same period in 2014.

Despite the fall in revenue, the company said that its operating profit – EBIT (earnings before interest and taxes) before one-off items – remained level with the same period a year earlier when it was €20.1 million.

Chief financial officer Dr Margarete Haase said, “We are extremely pleased with the recovery in the Deutz share price. The price of our shares rose by 28.5% in the first six months of 2015, outperforming all benchmark indices.”

Deutz said that as previously announced, it was adjusting its production capacity in China to reflect the new, lower level of market demand, and that it was focusing on its existing Deutz Dalian joint venture.

Deutz has reached an agreement with its partner Weichai Power on the sale of its shares in their joint venture Weifang Weichai-Deutz Diesel Engine in Weifang, but the transaction is currently still subject to the approval of the relevant authorities in China.

Deutz said the measures it had implemented to optimise its network of sites in Germany were also progressing on schedule.

Dr Helmut Leube, chairman of the board of management, said, “The first stage in the relocation of the exchange engine plant from Übersee am Chiemsee to Ulm, which involved moving the assembly line, was successfully completed over the past few months.

“On 6 July, 2015, just after the end of the second quarter, we laid the foundation stone for the new Deutz shaft centre at our Cologne-Porz site, which will turn Cologne into an integrated site for large-scale production series.”

Deutz said it expected 2015 to be a year of transition dominated by lower demand resulting from the advance production of engines in 2014. As a result, the company continues to forecast that revenue will decline by around 10% compared with 2014, and that the EBIT margin (before one-off items) would improve slightly, to roughly 3%.